My guest room has seven bookcases of children’s books, including this shelf which holds the Ellen Confords, three by L.M. Boston, Understood Betsy (which I couldn’t find when I needed it last month for the family read!), the Carol Ryrie Brinks, and my E. Nesbits.

Ellen Conford wrote very amusing YA novels as well as middle grade books.   My favorites are Dear Lovey Hart, I am Desperate; its sequel, We Interrupt This Semester for an Important Bulletin; and her own favorite, The Alfred G. Graebner Memorial High School Handbook of Rules and Regulations (wow, I didn’t know there was an After School Special!)(this book is missing from the shelf, which annoys me although it was a sticky ex-library copy), which are about nice girls from Long Island trying to navigate adolescence, high school, and well-intentioned but clueless parents.  Carrie Wasserman, the heroine of Dear Lovey Hart, is on the school paper languishing after Chip, the editor, who asks her to become the secret Dear Abby of the newspaper, with comic results.  During my first summer in NYC, I headed off to meet Ms. Conford at a book signing at long-gone Eeyore’s Bookstore, got lost in Central Park, came out on the wrong side, and had to take a taxi so as not to miss her! She was bemused by my enthusiasm. 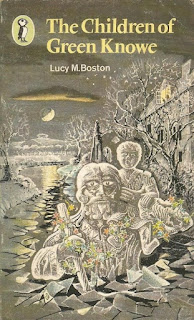 I am sure I would have found L.M. Boston eventually but a librarian in Mt. Vernon, NY handed me the first Greene Knowe book when I was visiting an aunt there at 10 or so.  Yes, I was the guest who wanted to be entertained by being taken to the library!  That librarian also gave me Time at the Top, another favorite.  This series is based on the author’s home, a manor house built in the 1130s in Cambridgeshire, which I wish I could have visited when I was in England two years ago.  It is still maintained by Mrs. Boston’s daughter-in-law, who is apparently very kind to visitors paying homage. 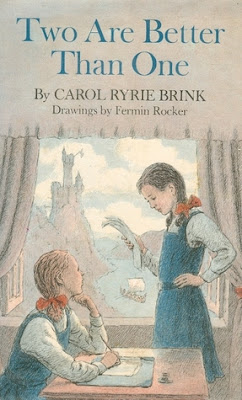 Brink's Caddie Woodlawn, which won the Newbery Medal in 1936, is a children’s classic about an irrepressible girl growing up in mid-19th century Wisconsin.  All Brink’s books are enjoyable and quite different from each other – some are historical and some contemporary.  My two favorites are Two Are Better Than One (which is a little reminiscent of Betsy-Tacy) and Winter Cottage, about a family in the Depression that moves into an empty house, but all are delightful.   All Brink’s books were in my school or local library except the sequel to Two Are Better Than One, which I was astonished to find about ten years ago. 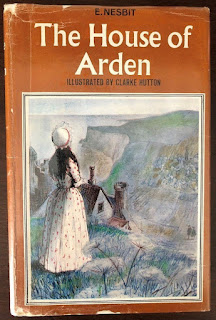 Edith Nesbit (1858-1924) was one the most influential writer of children’s books, known for her realistic approach, especially the way she intermingled fantasy with everyday life.  Her first success was a trilogy about the Bastable children, normal children who squabble and came up with unsuccessful money-making schemes.   I preferred her fantasies, particularly The House of Arden and Harding’s Luck, which time travel classics.  I have not had much luck introducing Nesbit to my nieces and nephews, as her style is old-fashioned; they all prefer Edward Eager, who was a big fan and mentions her frequently in his books.

Almost all of these authors are new to me. The children's books we have are more heavy on illustration rather than text. I have heard of Edith Nesbit, but have not read any of her books.

I thought I had a lot of children's books but you are outdoing me! I have a copy of Harding's Luck but haven't read it yet although I have read a lot of Nesbit's books. I enjoyed the Green Knowe book fairly recently.

What a fun room to be a guest in! I would stay up all night rereading favorites and discovering new authors and new stories and not get any sleep at all. Caddie Woodlawn was a favorite from my childhood, and I reread it a few years ago and enjoyed it so much. I really should try some of Brink's other stories.

My guest room bookcases houses several of my favorite mystery series. Awhile ago, I decided to pull out the mysteries from regular fiction as I needed the space, and it's worked well.