This shelf contains primarily historical fiction/upscale historical romance by British authors Brenda Jagger and Stella Riley and Canadian author Susanna Kearsley.  Jagger (1936-86) wrote just nine novels, several of which were set in 19th century Yorkshire.  She is best known for The Barforth Trilogy, which consists of The Clouded Hills, Flint and Roses, and The Sleeping Sword (these were retitled in the US which is always annoying when you think you've found a new one).  It is a wonderful series set in the late 19th century in which independent women struggle with identity, marriage, class, and the expectations of those around them.  I am trying to remember which are my favorites so took A Winter’s Child down from the shelf beneath the one pictured and began rereading.  Set in Yorkshire just after World War I, it is about a young widow who spent the war nursing soldiers in France and returns home to rebuild her life near her husband's family.  I gave it 5 stars the last time I read it. 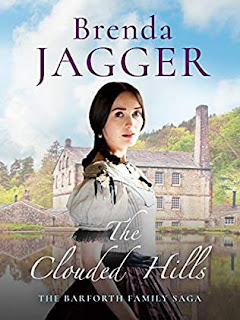 The other two are writing currently.  Stella Riley writes historical fiction under that name and as Juliet Blyth.  I especially like her novels set during the English Civil War.  I suggest you start with A Splendid Defiance. 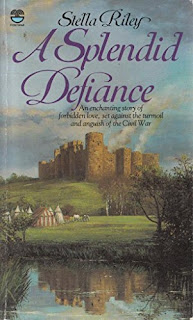 Others are more traditional historical romance set in the 18th century, in the tradition of Georgette Heyer.  Until she started self-publishing them, her books were very hard to acquire.  I remember finding a copy of The Black Madonna in a used bookstore in British Columbia in 1998 and doing a little jig of joy. 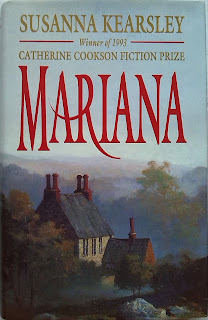 I first came across Susanna Kearsley when I was working at Bantam Books and read that she had won the 1993 Catherine Cookson Fiction Prize, sponsored by Transworld publishers, for Mariana, which was compared to Mary Stewart.  Transworld was Bantam’s UK partner so I persuaded a coworker to get me a copy from her London contacts.  Kearsley mentions on her blog that suspense writer Evelyn Anthony (whose book, The Poellenberg Inheritance, I finished earlier today, coincidentally) was one of the judges and actually gave her the prizewinning check. Kearsley has written one thriller, Every Secret Thing, under the name Emma Cole but she has not returned to that genre, although some of her books could be characterized as romantic suspense.  Kearsley was a well-kept secret for a long time until The Winter Sea came out and she started to get review attention (including my review, back in 2010).  Most of Kearsley’s books involve dual timelines, a contemporary heroine, one in the past, and a story involving both.  I think it takes a very skilled writer to move back and forth convincingly without shortchanging either story, although sometimes one is more compelling than the other.  Kate Morton is one of the best-known writers of this genre; I have read some authors who did not impress me at all.

I enjoy reading historical fiction, but I don't like it to be too heavy on the romantic side. Two of these authors interest me. Brenda Jagger, with the Yorkshire setting. And Susanna Kearsley, mainly because she is a Canadian author. It doesn't look like any of her books are set in Canada though. I am sure I can find one of her books to try.

I too like dual timelines but I'm happier with straight historic fiction. I'm definitely interested in reading Brenda Jagger, another one for my list. I really like Susanna Kearsley's The Shadowy Horses and Season of Storms, but haven't got around to reading any more. I enjoyed The Shadowy Horses most, probably because I know the setting fairly well.

As I recall, only Kearsley's very early book Undertow is set in Canada and it was not memorable. I wish she would set another there but I guess she is like me and prefers European history. My sister found them too romantic so her books might not be right for you, Tracy. If you like Mary Stewart, I would try Mariana.

Brenda Jagger, on the other hand, has a wry, detached quality that I think appeals to readers who usually prefer their historical fiction without much romance. Even when her heroines are infatuated, they usually recognize how foolish and temporary it is. And I appreciate that her women characters may yearn for independence but it is not handled in an anachronistic way (which I can't stand).

Author Kate Quinn is another big fan of Brenda Jagger.

I have most of those Susannah Kearsley books sitting on my own bedroom bookshelf. :) But I've never read any books by Jagger. At least, not yet. :)