I love organized bookshelves (daughter of a librarian) so it was painful to remove all the books on the first floor from their bookcases in preparation for the whole floor being painted. In particular, I had to stop to admire two shelves of Elswyth Thane's books. She has been one of my favorite authors since I was about 14 and my mother left a copy of Dawn's Early Light on my pillow. Those with good eyes will see I include two books by Thane's husband, William Beebe, the Jacques Cousteau of his day, although I have not read them yet, rescued by my mother from the discard pile at her library. I believe I own every book Thane wrote except The Bird Who Made Good. Naturally, some are better than others and I notice that Tryst, a standalone that is somewhat dated, has gained new fans recently. 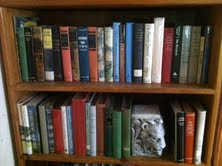 Here is a picture of the guest room with all the books from the living room and my office piled on the floor: 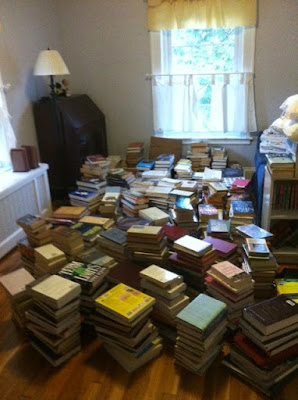 Plot: Everyone has a cherished friend from college – this book is about Pen, Will, and Cat, who met cute the first week of college after a Beowulf lecture and became inseparable. Their friendship insulated them from much of the angst of college life and was so all-fulfilling it made other people envious or resentful, not that this three cared. After college, they shared an apartment in Philadelphia until Cat left the group abruptly, and without her, Pen and Will’s relationship faltered and disintegrated. Now, just before their 10th reunion, Pen and Will receive an email from Cat asking them for help and to meet her there. Although still bitter and hurt, neither hesitates, and the ordinary college reunion turns into a quest to resurrect a friendship.

What I liked: I loved the author’s first book, Love Walked In, from the very first page, and enjoyed the sequel, Belong to Me, nearly as much, so had been eagerly anticipating a new book from this author. I liked Pen and her daughter Augusta (although that name is better suited to a Georgette Heyer), her brother and Will. De los Santo is one of the most lyrical writers I have ever read and it’s impossible to put down one of her books (it’s also dangerous: my mother swiped it for several hours when I did). My sister and I wonder if the lyrical quality of her writing is because she was a poet before she started writing fiction or did she become a poet because her writing is lyrical? What might seem over the top in another writer irrestiistbly captures and conveys her characters’ feelings:

But she found her voice was shaky. “Okay, maybe. Once or twice, in my darkest hours.”
Will didn’t say anything. Then he said, “I’m sorry.”
“It’s not your fault.”
“No, I’m sorry you had darkest hours.”

The story is told primarily from Pen’s point of view, and her adorable quotient is offset by a fairly messed up personal life or it would be too much. I guess that is true of all de los Santos’ heroines but they are appealing nonetheless. There are also many appealing literary allusions. While you are waiting for this one to come out, hustle on out to get a copy of Love Walked In, which was full of movie allusions.

What I disliked: While delightful, the first two books were quite improbable, and although the plot of this book was more likely (estranged friendship) the parts relating to Cat dragged at times. I think this was because the author better conveyed the appeal of Pen and her family and Will and his family than she was able to capture Cat. I understood why Pen and Will needed to find Cat – but I suspected she was the member of the triumvirate I would have disliked in real life.