It is never too soon to introduce a little girl to Betsy, Tacy and Tib!

I was able to personalize these dolls, and am pleased with the results.  The hair color worked, even though I couldn't get ringlets for Tacy and a fluff of hair for Tib. 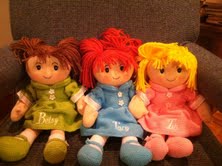 For those who enjoyed the PBS series* (and if you missed it, here is an article from Time Magazine to change your mind) and are eager to read more about midwives:

Call the Midwife: a True Story of the East End in the 1950s – Jennifer Worth
This is the first of a trilogy about the author’s work in post-WWII London as a midwife, and inspired the PBS series. Like the characters in the series, Worth left a comfortable home to live in a convent and minister to London’s slums.

Midwife’s Tale: The Life of Martha Ballard, Based on Her Diary, 1785-1812 – Laurel Ulrich
Winner of the Pulitzer Prize for History, this fascinating book is based on the diaries of a midwife and healer in 18th century Maine.

The Midwife - Gay Courter
An old NAL bestseller: Hannah Blau and her family emigrate from Russia (where she received her medical training) to the Lower East Side of New York where she faces a harsher world than that of All of a Kind Family. 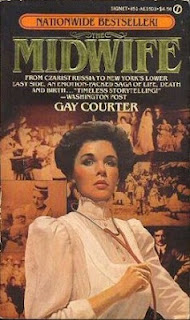 The Midwife’s Advice – Gay Courter
I don’t recall whether NAL suggested a sequel or if Courter had been seriously been pondering Hannah Blau’s wellbeing for years. We had high hopes and sold in a lot of copies; it was different from the first book (maybe a little anachronistic in its treatment of sexuality and birth control) but very enjoyable. I wonder why so many midwives are named Hannah?

The Healing – Jonathan Odell
A multigenerational saga set in Mississippi. Granada , a salve, is born on the same day that her plantation mistress's daughter dies of cholera, and as a result receives special attention and is trained as a healer. I have not read this yet but heard great things about it.

Hearts and Bones - Margaret Lawrence
This was one of the first books on Avon’s hardcover list which I helped launch in 1997. Set in 18th century, Maine, midwife Hannah solves a mystery while caring for patients in a rural community

Murder on Astor Place - Victoria Thompson
First in a strong historical mystery series set in early 20th century New York, this midwife's work with a rich family brings her into contact with murder and then try to solve the crime.

Midwife of the Blue Ridge – Christine Blevins
I was attracted to this book because the heroine, trained as a midwife after her family is killed, travels from Scotland to Virginia in 1763 where she becomes an indentured servant

Midwives - Chris Bohjalian
This is probably the best known book on my list because it was an early Oprah pick. A Vermont midwife tries desperately to save a baby’s life and is condemned when the mother dies.

My Name is Mary Sutter – Robin Oliveira
I had heard good things about this and chose it for my Book Group last year. It was well researched but very very dark; reminded me of Louisa May Alcott’s service at a Washington, DC hospital during the Civil War, from which her health never fully recovered.

Mountain Midwife – Cassie Miles
I chose this because it’s funny and quite a contrast to the others: in this contemporary romance, Rachel is kidnapped, blindfolded and driven to the Rocky Mountains to deliver a baby. She is determined to save the baby, with the help of one of the alleged kidnappers. 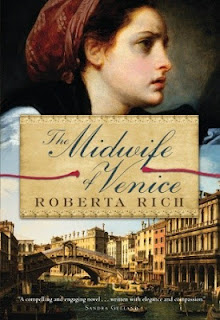 Midwife of Venice – Roberta Rich
Another Hannah (!), a Jewish midwife in 16th century Venice, asked to attend a Christian in childbirth, although is it illegal for Jews to render medical treatment to Christians, and is punishable by torture and death if she is caught.

The Red Tent – Anita Diamant
I must admit I never got past the first chapter of this book, but so many of my friends loved this Old Testament of Jacob’s daughter (a midwife) that I included it.

Hannah: Mormon Midwife – Jaroldeen Edwards
Hannah is a midwife in 1870s Utah who is committed to serve women through safe and humane medical practices. Not surprisingly this results in enemies and threatens her chance for True Love. I met Jaroldeen at a Romantic Times convention years ago and am sorry to read that she died in 2008, although believe she had a very blessed life. 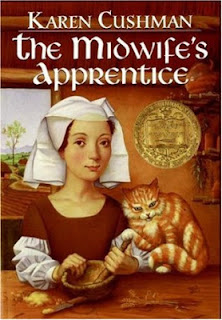 Cushman won the Newbery Award for this 1996 story about orphan/homeless Alyce who becomes the apprentice to a hot-tempered apprentice in medieval England.
---   And did anyone else remember Jenny Agutter, playing a nun in Call the Midwife, from a long ago production (and, apparently, a more recent remake) of The Railway Children?