In my first week of law school, I learned who would be walking to the Path with me after class: it was Brian Burlew, Renee Reedy, David Mello, Randall Berman, Eduardo Jimenez, Anthony Brown, and Gary Polanco. Renee called her boyfriend in Australia every night as we walked to Penn Station which was anti-social behavior I gladly forgave when she introduced me to TimTams, Australia's favorite cookie. Two layers of biscuit surround chocolate cream and the whole thing is covered with chocolate. Renee brought me back a package after one trip and I was hooked. It added to my desire to visit Australia one day! (Of course, now that she has married dear Craig there is even more reason to travel there.) Then, a week or so ago, I learned via Twitter that Pepperidge Farm had introduced TimTams to America (at least in NYC). I did take a quick look at my grocery store last week but saw nothing appealing (well, that is untrue as one cannot walk the cookie aisle without wanting to buy something). Tonight, however, I found TimTams on sale at Target for $2.50 per box! Apparently there are three different flavors: I am quite happy with Classic Dark... At least until I am finished with this package! 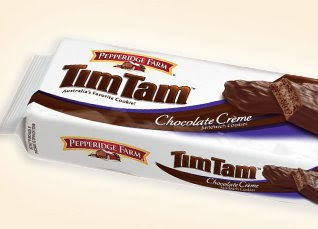 What would you like for Christmas from a four year old?

Yesterday I was babysitting my nephews while their parents attended the funeral of our dear friend Doug's mother, Joan. At one point, contemplating the holidays, I looked around the living room area of my parents' home and, thinking aloud but vaguely wanting to include the children, said, "I wonder what Gram and Papa would like?"

Does that sound like a direct quote or what? I can just hear my father beseeching the boys to listen more attentively.
Posted by CLM No comments:

This is one of those weekends where there simply isn't enough time to do everything:
tonight, the Harvard men's basketball team hosted Bryant, for the first time ever. Bryant is only in its second year in Division I, so I didn't think they would be able to put up much of a fight (but my niece and I admited two players in particular, Papa Lo from Sengal (a transfer from UMass) and Claybrin McMath from Australia)). Bryant hung with the Crimson early but then Harvard pulled away and eventually won 77-51. It was nice to see our new freshmen getting off the bench and into the game at the end. However, I was sorry to read earlier in the

When the basketball game ended, we dashed over to Bright Rink to catch the last ten minutes of the Harvard-St. Lawrence hockey game. St. Lawrence has a lot of Boston alumni and always has a sizable crowd of fans. Tonight they really had something to cheer about as their goalie apparently was amazing, and they won 3-2, although godlike freshman Louis LeBlanc had a great shot near the end we hoped would go in to tie it up. Saturday night, the Harvard hockey team is at home against Clarkson, and urgently needs to turn around its early season woes.

Tomorrow, of course, is the Harvard-Yale game. The Game is simply not as much fun in New Haven (except for the time I met Paul Wylie - I remain convinced that my good wishes resulted in Olympic Silver for him a few months later) plus my niece is performing in a local production of The Wizard of Oz, my younger nephews are in town, and I have several motions to draft for work. However, when you read stories like this one about senior Derrick Barker (written by the talented daughter of Cynthia and Mike McClintock) it makes you wish the Ivy League were eligible for post season play so that more people would know about our talented players.

Finally, on Sunday, the men's soccer team has a first round NCAA matchup against Monmouth (known primarily for its pretty location in NJ - no, that is not an oxymoron - and because my former department head George's children went there) at 1:00 in Allston. Monmouth has a great team this year - who knew?
Posted by CLM No comments:

Libraries of the Future

As Kindles and Nooks and electronic books grow in popularity, I remain convinced I would rather have a physical book to cherish and return to for rereads. I hate reading about institutions such as Cushing Academy, which recently got rid of all its books (I wonder whether the alumni really knew what was going on and how they reacted to all the publicity). Am I the only one who rereads her favorites on a regular basis?

Author James Patterson, recently criticized Cushing Academy's decision to discard their books, and apparently he paid for his niece to attend the school (well, he can afford to - if I had his money, I would buy my nieces a school).


The magnificent Harvard University Library system (70 plus libraries, 16 million volumes) is struggling with budget constraints like everyone else, and the provost says that one of the university's "main goals . . . is to ensure that students and faculty have access to much of the world’s scholarly works “in perpetuity” by taking advantage of digital resources, but such access does not necessarily mean “ownership and preservation of everything.” This makes me sad because I thought Harvard was practically the Library of Congress in terms of acquisition. Where will scholars go if they cannot rely on Harvard to have the resources they need?

I don't want my libraries to change, although I will admit I love one new feature - being able to place reserve and purchase requests online, then pick up the books magically a few days or weeks later.
Posted by CLM 6 comments: 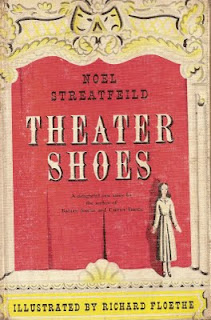 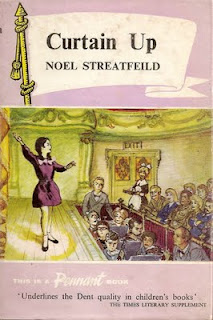 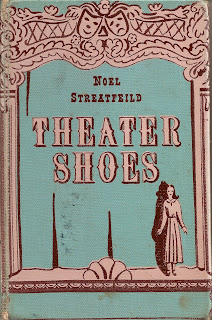 It can be stressful to love one's books as much as I do, especially when it involves painful decisions! For example, I live in an apartment with limited space for my books. I take pride in my nearly complete collection of Noel Streatfeild but here is my dilemma: I own three copies of Theater Shoes. It may not be one of my top three favorites but it is probably a top five. It is a great story about three children who go to live with their grandmother during WWII and realize not only that they are part of a family involved in the theater but have theatrical talent themselves. My favorite part is when Sorrel, the elder sister, gets to play in a production of The Tempest. The cover with Sorrel standing in front of the red curtain is from a hardcover I found a couple years ago at the Bryn Mawr Bookstore. It is in very good shape, a nice solid hardcover, so you'd think it would be the one I should keep.

Yet the shabby blue one, a tired ex-library rebound copy, is the very book I read repeatedly growing up, having been discarded by my childhood library (what were they thinking? the book is in perfectly good shape). How can I give it up when I know how many times my sisters and I read it? And finally, you see what appears to be a modest copy of Curtain Up, which is the British title, was sent to me by the generous Nicky Smith years ago. I assumed that she knew I'd enjoy having the British edition and was appreciative. Amazingly, I didn't even notice at first that she had sent me (doubtless at great expense) a book that had been autographed by Noel Streatfeild herself! How exciting is that! There is no way I'm letting this book go. So, as you can see, there is no solution - I need all three editions in my library. I just need more space for my books. Don't these three cry out to be displayed together? 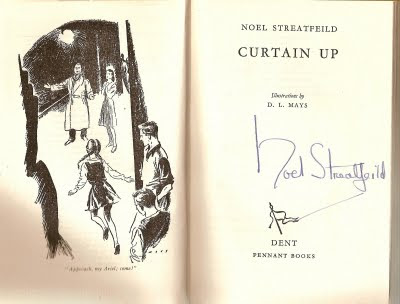 I yearn constantly for my grandfather's library - not his enormous collection of books which I believe he sold to the University of British Columbia before his death - but the fabulous room he used as a library in what was once Horace Greeley's barn. Supposedly, Greeley's daughter used this room as a ballroom. My grandfather had bookcases on all four walls, an enormous desk made out of a barn door, and a grand piano. There he wrote Music in Western Civilization and Handel and other books, wrote opera reviews, music articles, advised students, colleagues and friends. It was sad when they decided to downsize and move to Connecticut to a smaller house once my aunt and uncles were grown up. There is a remote connection between my grandfather and Noel Streatfeild - as you can see, the spelling of her name is unusual, but when my mother was helping him with one of his books she came across a British musicologist named Richard Alexander Streatfeild (perhaps a relative of Noel's?). My grandfather was impressed that my mother knew how to spell that surname: not sure she told him it was because of Ballet Shoes . . .

The weather forecast for Saturday is great, and I am looking forward to a walking tour in Cambridge:

Follow the student footsteps of Theodore Roosevelt and Franklin Delano Roosevelt on this walking tour with Michael Weishan, author, PBS host, and president of the FDR Suite Foundation. With architecture as a guide, visit buildings important to these two men, learn what Harvard and Cambridge were like between 1870 and 1904, and explore 19th-century student life on Harvard's "Gold Coast."

Having visited Theodore Roosevelt's Long Island home, Sagamore Hill, it will be interesting to see Harvard locations not officially connected to the Roosevelts.

Of course, all roads lead to Betsy-Tacy. I was always loyal to Teddy Roosevelt because I knew the Ray family were supporters. Mr. Ray's study "held a roll-top desk, a picture of the shoe store in Deep Valley and an even bigger picture of ex-President Theodore Roosevelt." Betsy's Wedding, page 48.

Joe and Mr. Ray are ensconced for some time (you know he is asking for Betsy's hand in marriage), then the family hears, "Leave it to Teddy!" coming from Mr. Ray. The group downstairs looked at each other in complete mystification. What, their raised eyebrows seemed to ask, did Theodore Roosevelt have to do with Betsy's Wedding?

Anna brought Betsy a cup of coffee. She brought her a muffin. Mrs. Ray and Julia wanted coffee, too, and Paige started pacing the floor. At long last the door of the study opened.
"TR is as right as rain," Betsy heard her father declare as he and Joe came down the stairs.
Betsy's Wedding, page 49.
Posted by CLM No comments: