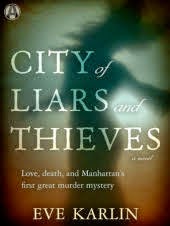 Plot: A crime that rocked a city.  A case that sunned a nation.  Based on the United States' first recorded murder trial, Eve Karlin's debut novel recreates early New York City, where a love affair ends in a brutal murder, told by the victim's cousin, and a conspiracy involving Alexander Hamilton and Aaron Burr erupts in shattering violence.

It is high time to tell the truth. Time for justice. . . . How she was murdered and why she haunts me. It is not only Elma’s story, it’s mine.

What I liked:  Having attended the Alexander Hamilton elementary school in Boston, I have always been interested in him so was eager to review this novel.   Karlin does a wonderful job capturing an era of New York that is unfamiliar to me.  Her work is well researched and works as a historical murder mystery as well as a depiction of famous men and their intrigue.  Those interested in realistic history will enjoy this - and you will appreciate clean water much more after you finish!

The famous duel between Burr and Hamilton took place in Weehawken, NJ where I used to go for work conferences.  I can't recall if the location of the duel is marked in some way but I often thought about it!

Other Recommendations:  My Theodosia by Anya Seton, about Burr's (much nicer than he) daughter. It is dated but enjoyable.  For a duel with as much drama but a more satisfying ending, try Savannah Purchase by Jane Aiken Hodge, one of my all time favorites.

What I disliked: I did not really care for any of the characters, even Catherine Ring, the heroine and only person who cares about her flighty cousin.  However, it bothered me that neither she nor her husband behaved like Friends, although that was one of the first things we learned about them.

Source:  I received this book from TLC Book Tours as part of Eve Karlin's Blog Tour.  This tour includes a Rafflecopter giveaway for a $25 gift card to the eBook retailer of the winner's choice plus a copy of the book!  The giveaway only lasts until January 30, 2015 so enter quickly!

The Girl with a Clock for a Heart (Book Review)

Title: The Girl with a Clock for a Heart
Author: Peter Swanson 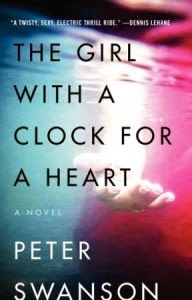 Plot: George Foss leads a dull life in Boston and friend-with-benefits-Irene is his only social outlet until Liana Decter reappears in his life unexpectedly.  During his freshman year in college, he fell magically in love with a beautiful young woman who didn’t return after Christmas vacation.  George traveled to her small home town in Florida to find out what had happened and learned she was involved in a murder.  Following his disastrous trip, George returned to college and tried to forget Liana.

Twenty years later Liana appears at George’s neighborhood bar and asks him for a favor.  She says she’s made some bad choices and needs a reliable intermediary to return stolen property.  She promises there is no danger to George, and he is so mesmerized at being near her again, he fails to exercise any form of common sense.  His seemingly simple errand for Liana plunges him into danger in a fast paced-thriller that is hard to put down.

What I liked: Although this started slowly and the flashback that opened the story was distracting, once the action began it was like a roller coaster of twists and turns – some of which might have been predictable if I had stopped for breath while reading (or if George had looked before he leaped). It was a fast, fun read, as well as being a good variation on the predictable reunions of long-separated lovers.

And how can Liana be all bad (rhetorical question – she is) if Rebecca is her favorite book (although it seems improbable she would have come across it by 18 but maybe she had a good librarian)?

What I disliked: None of the characters was very likeable; even the hero lost my sympathy by walking into danger repeatedly.  Could a woman really exercise that sort of power over someone who hadn’t seen her for twenty years?

Source: I received The Girl with a Clock for Her Heart from TLC Book Tours and urge you to stop by the tour to learn more about Peter Swanson and his new hardcover, The Kind Worth Killing.
Posted by CLM 1 comment:

Email ThisBlogThis!Share to TwitterShare to FacebookShare to Pinterest
Labels: book review, Peter Swanson, suspense, The Girl with a Clock for a Heart, TLC Book Tour

For about 20 years, members of the Betsy-Tacy listserv have participated in a sort of Secret Santa ornament exchange, inspired by Betsy, Tacy and Tib's historic (so to speak) shopping expedition in Betsy-Tacy Go Downtown.  It is always a special moment when the mail arrives with that box, often addressed to a character from the famous tomes.  This year's ornament exchange brought a note from Betsy Ray:

Dear Tib, Do you think Gaston would have appreciatedour herbariums more if our specimens has been a little sparklier?I'm sure we'll never do anything like that again - but it was fun,just this once!   Merry Christmas!Love, Betsy

I love this leaf ornament that looks as if it had been dipped in silver!  If you don't remember Betsy, Tacy and Tib's herbarium adventure, you can read about it here. 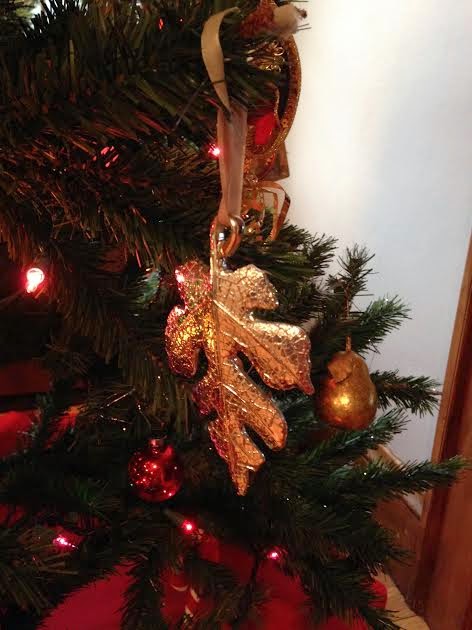 I have decided next year I will move the tree to a window that is not obscured by shrubbery - I like the way it looks in front of the fireplace but I also want people walking or driving past to be able to see the lights.  Where do you put your tree? 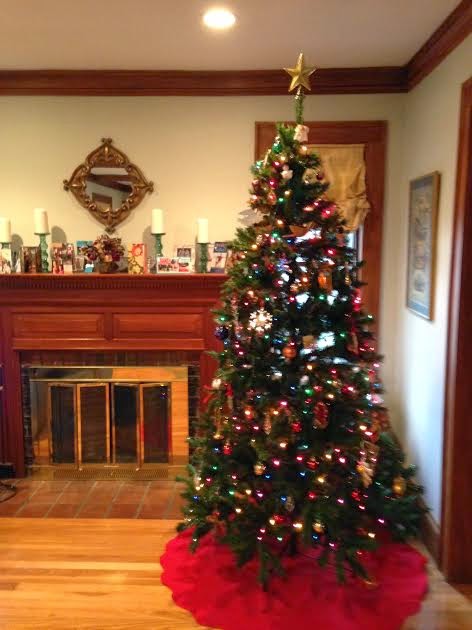 Thank you, kind sender, and thanks to all the elves who manage the ornament exchange!  My nieces and I always have fun participating.
Posted by CLM 1 comment: