How to be Fashionably Bribed

It's true, as the Herald says, if you're the kind of person who accepts bribes, why not use a nice purse? BC Law School is not going to be rushing to claim Dianne Wilkerson as an alumna . . .
Posted by CLM No comments:

We've decided we're leaving. We intend to form our own country, and we're taking the other Blue States with us. In case you aren't aware, that includes California, Hawaii, Oregon, Washington, Minnesota, Wisconsin, Michigan,Illinois and all the Northeast. We believe this split will be beneficial to the nation, and especially to the people of the new country of New California.

To sum up briefly: You get Texas, Oklahoma and all the slave states. We get stem cell research and the best beaches. We get the Statue of Liberty . You get Dollywood. We get Intel and Microsoft. You get WorldCom. We get Harvard. You get Ole' Miss.

We get 85 percent of America's venture capital and entrepreneurs. You get Alabama. We get two-thirds of the tax revenue, you get to make the red states pay their fair share.

Since our aggregate divorce rate is 22 percent lower than the Christian Coalition's, we get a bunch of happy families. You get a bunch of single moms.

Please be aware that Nuevo California will be pro-choice and anti-war, and we're going to want all our citizens back from Iraq at once. If you need people to fight, ask your evangelicals. They have kids they're apparently willing to send to their deaths for no purpose, and they don't care if you don't show pictures of their children's caskets coming home. We do wish you success in Iraq, and hope that the WMDs turn up, but we're not willing to spend our resources in Bush's Quagmire.

Additionally, 38 percent of those in the Red states believe Jonah was actually swallowed by a whale, 62 percent believe life is sacred unless we're discussing the death penalty or gun laws, 44 percent say that evolution is only a theory, 53 percent that Saddam was involved in 9/11 and 61 percent of you crazy bastards believe you are people with higher morals then we lefties.Finally, we're taking the good pot, too. You can have that dirt weed they grow in Mexico.

(anonymous email forwarded from my friend Gilly)
Posted by CLM No comments:

I like Thanks, But No Thanks to Absentee Voting from the Washington Post's Marie Coco:

"I’ve always been slow to embrace new fads. I didn’t go for brown as the “new black,” and since purple is now the “new black,” I’m certainly glad I stuck with the old. The same for following my parents’ example of never buying on credit. Boy, did that one work out.

As Election Day approaches, I revel in my fuddy-duddy habits. I live in the battleground state of Virginia, where voter registration has increased 10 percent in advance of November’s presidential election, where Democrat Barack Obama has invested huge sums in a sophisticated get-out-the-vote operation and where Republicans are pushing their precinct captains to hang onto a state that hasn’t gone Democratic since 1964. Election officials are so fearful of a chaotic crush at the polls that they’re urging people to vote early with absentee ballots. Though absentee voting in the commonwealth requires voters to meet one of several conditions, officials have nonetheless made it clear that -- ahem -- it’s easy to qualify. (And voters requesting presidential-race-only ballots don't even need an excuse.)

Sorry, I just can’t. I know that if I do vote early, I’ll miss out on long lines, sore feet and the possibility of confronting an over-taxed electronic machine that might malfunction.
But here’s what else I’ll miss -- and what can’t be replaced by a quick-and-convenient early vote: Being pressed to take that one last flier from a volunteer as I walk toward the elementary school; purchasing a treat from the PTA mothers who will set up a bake-sale table outside the polls; enjoying the children’s artwork in the hallway as the line to vote snakes through the school corridors; chatting with neighbors I haven’t seen in months.

There is something magical that happens at the polls on Election Day. It is a renewal of civic culture that marks the first moment of reconciliation after the incivility of a contemporary presidential campaign."

This is why I want my nieces to come with me to the polls on November 4th, although of course they have gone with their parents!
Posted by CLM No comments:

Rays or Phillies? do we care?

It is hard to decide who to root for in the World Series, partly because I just don't care now that my team has been eliminated. Overall, I am for the Rays because I like Carlos Pena, who played for Northeastern and briefly for the Red Sox, and Rocco Baldelli, who is from Rhode Island. And how can anyone root for the Phillies when their fans are so unpleasant (at least, the Flyers and Eagles fans seem to be nasty and surely it is primarily the same fan base). But I do like Jamie Moyer who is pitching tonight for the Phillies. His wife is still very beloved by the Boston radio announcers although it must be many years ago that he pitched for the Red Sox.

I like this endorsement by Ron Howard for Obama.
Posted by CLM No comments:

The Washington Post has an interesting article about the changing role of the Associated Press.
Posted by CLM No comments: 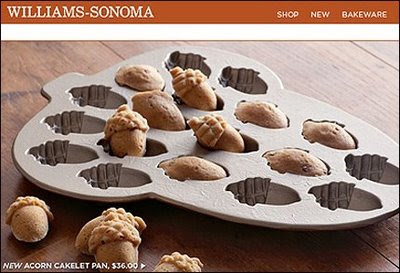 Now that I have volunteered to spend Election Day as a nonpartisan volunteer protecting voter rights, I should not allow myself to be amused by this blog, which is showcasing some very timely Williams-Sonoma bakeware...
Although as several have pointed out, voter registration fraud is not the same as election fraud, and it is unfair for Acorn to be tainted for the actions of just a few people. But isn't that the way it always is?
Posted by CLM No comments:

Here is an interesting chart of regional speech differences, and it addresses (but does not really answer) why some of my friends mispronounce the word mischievous (which they frequently apply to me). My friend Squire consistently said, "Mis-cheeve-ee-us," which I found quite odd but he is not alone...

And at my law school in NJ people called spigots "spickets," which I also found very odd. I found this out in my quest for hot tea - there was a plot to withhold caffeine from the evening students, who obviously needed it (especially when taking Property).
Posted by CLM No comments:

Click on Sarah Palin's desk!
Posted by CLM No comments: 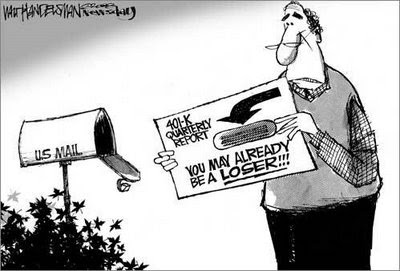 Especially suitable for a sweepstaker like me!
Posted by CLM No comments:

The National Debt Clock situated near Times Square ran out of numbers as the federal government's debt soared to $10.2 trillion. The billboard style clock, which was erected in 1989 by late Manhattan real estate developer Seymour Durst, was only equipped to handle a debt of up to $9,999,999,999,999.

I have bought many books in my life, some of them more expensive than others, but was stunned to learn today that this book about the International Trade Commission costs $655.00! I am lucky the librarian at my job bought it for me (she did make sure I knew how expensive it was when she presented the new edition to me today). The annoying thing is that I don't even think it is a very good book but there is so little available on the ITC that every practitioner needs to have it. But even if I knew enough about Section 337 to write a more complete guide (with a better index), I doubt it would be a bestseller. The irony of owning such an expensive book that is not a delight to read . . .

Now imagine how many books I could get from Amazon.co.uk for that much money!

I keep thinking about my friend Suzanne's copy of Carney's House Party, which I seem to recall cost $700.00, and was surely the most thoughtful birthday present anyone ever received (and how was her husband to know it would be back in print ten years later?). That is the only book I can think of in the same realm as this, price-wise, in my experience. I own an advance reading copy of the first Diana Gabaldon, which I assume is valuable, but do I want to part with it?

Say it ain't so, Sarah

Steven Pinker, writing for The New York Times tells me:

And no, “nucular” is not a sign of ignorance. This reversal of vowel-like consonants (nuk-l’-yer —> nuk-y’-ler) is common in the world’s languages, and is no more illiterate than pronouncing “iron” the way most Americans do, as “eye-yern” instead of “eye-ren.”
Posted by CLM No comments:

Feeling left out of the political process? Not quite sure how to field-dress a moose? Plenty of hope but far too little cash left in your 401k? 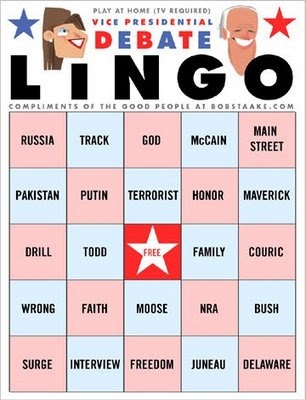 Sure, McCain, Obama, Biden and Palin all feel your pain -- and now you can play along!
Simply download and print these LINGO cards -- then watch the televised presidential debates. When a candidate utters the buzzword, cross it out. First player to get five across, up and down or diagonally wins (same rules as Bingo).

Deep appreciation to Bob Staake and his site.
Posted by CLM No comments: