Plot: 1936: Glamorous swimmer Eleanor Emerson is on her way to the Berlin Olympics to defend her gold medal but parties so hard crossing the Atlantic that Avery Brundage bounces her off the team. Friends offer her a job as a journalist (her name/reputation as byline while real-life writer Paul Gallico provides the actual reporting) and at first Eleanor is happy to attend parties. She is not a fan of Hitler but is oblivious to what he represents until she overhears a threat to keep two Jewish American athletes from competing in the Games. She confides in a handsome English journalist, Richard Denham, and they become embroiled in two plots: 1) Hitler’s pressure on German fencer, Hannah Leibermann, a Jew who is forced to compete to protect her family; and 2) the Nazis believe Denham has come into possession of a mysterious dossier that threatens the Third Reich and they will do anything to obtain it. Eleanor and Denham are a good team as they strive to outwit their enemies -- and several times she rescues him -- which is nice role reversal.

What I liked: Jesse Owens has some cameos, but I would have liked a little more about the actual competition, not to mention background on Eleanor’s swimming career. Will and Kate saw more of the 2012 Olympics than Eleanor, who is supposed to be a correspondent sending reports back to the U.S. However, the characters are vivid, the plot and setting original, and the action fast paced. I especially appreciated the depiction of the American Ambassador and his family. I really enjoyed this debut thriller and recommend it to fans of suspense and historical fiction.

What I disliked: Eleanor is married to a popular band leader in NY (based on Art Jarrett) who is clearly a jerk. However, she sure fell out of love with him quickly and into love with Denham. The romance worked as a plot device but was somewhat improbable. Also, surely it would have been very embarrassing for a U.S. Senator’s famous, married daughter to live in sin in London? In addition, Eleanor’s speech pattern was a little too “ah shucks” for my taste; whether realistic or not, I cannot tell. Brits can’t always write American characters convincingly.

Source: I am a huge Olympics fan, so I was eager to read this book once I read about it. HarperCollins provided me with an advance reading copy.

Years ago, probably when I worked at Avon Morrow, I came across the charming Roses are Pink, Your Feet Really Stink by Diane deGroat, a picture book about the hurt feelings that sometimes accompany the exchange of valentines in elementary school. Gilbert, the hero of her books, everyone’s favorite opossum, is appealing, if not as charming as Frances the Badger, and the situations he finds himself in are also universal (first day of school, field trips, camping with a bully, a show-off relative, tricks that backfire) in her holiday-themed award-winning picture books. 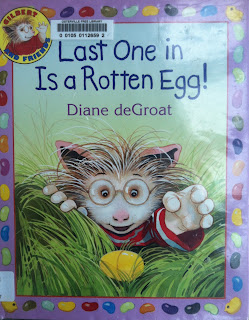 While visiting Cape Cod recently, I checked out Last One In Is a Rotten Egg for my 4 year old niece, and was delighted to see it was autographed by the author. She had even drawn a Gilbert on the bottom right corner of the title page! When I returned the book to the library I pointed out to the library staffer that the book had been autographed and mentioned it might get tough treatment if it stayed in circulation, but she pointed out that is what books are for. I thought it would look nice on display!  I wondered how Ms. deGroat came to sign this book... 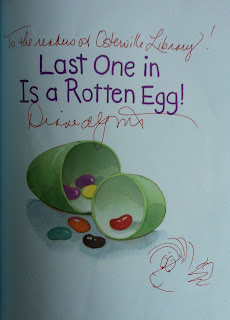 Plot: Sophie is a gawky 13-year-old in 1960 Louisiana whose parents recently divorced.  Even worse, her father appears to have left the state without saying goodbye. While her mother recovers from being ostracized by friends and tries to improve her job skills, she leaves Sophie to spend the summer at her childhood home on the bayou in all that remains of the Fairchild family’s once grand sugar plantation.

Sophie has read all the right books (Five Little Peppers, Story of the Amulet, The Time Garden, The Witch of Blackbird Pond) so when she sees a maze she follows the mysterious voice (a Natterjack-type creature) and winds up going back in time 100 years.  Tan, unkempt, barefoot and frizzy-haired, she is mistaken for a slave (albeit the illegitimate daughter of the ne’er do well younger son, conveniently out of town) and put to work.  At first, her ability to read (dangerous for a slave at that time) to her alleged grandmother (although the relationship is not discussed) saves her from a job in the fields, although life as a house slave is long and tedious.  But when her resemblance to the spoiled daughter of the house becomes embarrassing and she is framed for theft, Sophie is sent to work under the brutal overseer in the sugar fields and learns what hard work is.  Bitter at the betrayal of her parents in real life and of the Fairchild relatives in the past, Sophie learns how to control her temper and steer a safe path between the capricious white owners and the hierarchal slave society (150 slaves at the peak of Oak River Plantation’s glory) where there is resentment because of her lighter skin, the half-remembered stories she tells of automobiles and black people playing instruments in public for pay, which are dismissed as nonsense.  Her hard work and loyalty win her friends among the slaves (and she learns some useful household skills that will be useful back in present-day New Orleans), and it is ultimately, it is Sophie’s ingenuity that saves the day. 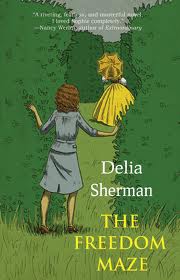 What I liked: Sherman magically brings her characters to life, from understandably sulky Sophie and her self-centered mother in the sticky 1960 summer, to her slave-owning ancestors and the various slaves who befriend her a hundred years earlier, particularly Africa (who we later learn was raped by Sophie’s five time great-grandfather) and her daughter Canada.   The depiction of life on a busy plantation is well done and fascinating.  The time travel aspect is handled well (there is nothing worse than bad time travel).  Naturally, an author who likes E. Nesbit and Edward Eager provides a moral lesson and rightly so.  Sophie matures and her attitude toward black people is changed by her experiences – the reader knows, although Sophie does not, about the civil rights movement that is about to change the South in the 1960s.  Short term, Sophie realizes she can assert herself with her domineering mother; long term - maybe another book?  But sometimes a book is so well done it needs no sequel.

What I disliked:  Nothing to dislike - I really enjoyed this book! Naturally, I hated the spoiled white girl, Miss Liza, who throws things at the slaves, even planting an item to get Sophie accused of stealing.  Even “old Missy” – the patrician grandmother of Oak River, who is otherwise a humane and gracious mistress – is willing to believe the slave is lying and banish her to the rough work in the sugar fields.  But the worst character of all is Beaufort Waters, Miss Liza’s suitor, who is eager to court the heiress while groping Sophie as she serves the family at dinner and later impregnating an unwilling slave.  Of course, all this behavior, while despicable, is only the tip of the iceberg of the inhumane activity that actually took place on Southern plantations.

Source: Years ago I gave my mother the author’s book, The Porcelain Dove, which she greatly enjoyed, so when I saw this mentioned on Goodreads I put it on my TBR list and got it from the CLAMS Library system while vacationing.  Now I need to check out what she was writing during the intervening years!
Posted by CLM No comments:

Plot: Orphaned at 10, Jeanne Chatel was taken in by convent where the nuns tried unsuccessfully to turn her into a young lady. At 18, longing for adventure and aware that lack of dowry leaves her few alternatives, she jumps at the opportunity offered to orphans as an honorary “King’s Daughter” – the chance to leave France to sail to a new life with the French colonists in the New World, which means ultimately marrying a complete stranger. Although Jeanne has always envisioned herself with a dashing hero, to save her shy friend from a harsh stranger, she undertakes to marry a French trapper who lives in the wilderness, vulnerable to the bloodthirsty Iroquois. The dangers experienced in 17th century New France are vividly (and terrifyingly) depicted but Jeanne’s fearless spirit helps her overcome all obstacles to create a new life for herself.

What I liked: Someone called Jeanne the French-Canadian Anne of Green Gables, and I love that comparison. Jeanne has Anne Shirley’s imagination and longing for affection and a family. She embraces every challenge and shows great ingenuity when faced with danger. In addition, she has a love of the wilderness and the physical courage to live in a place where death is a constant threat.

What I disliked: There was nothing to criticize in this vivid and beautifully written book. Apparently some readers were concerned with the depiction of Native Americans as murderous and fearsome, and ignoring their rightful claim to the land. In the revised edition, the author points out that her depiction is from the point of view of the settler.

Source: I don’t remember who recommended this book to me but it was well worth hunting down via Interlibrary Loan. It was one of my favorite reads of 2012.