Today would have been my grandmother’s 100th birthday.  Sadly, she died on March 9, 2015, a little more than six weeks short of that milestone.

As many of you have heard, Anne Pollard Pecheux was an attractive and headstrong young woman from Newburgh, New York.  Her father was married twice, and Anne was the fourth of seven children, and the first child of his second wife.   Her siblings were Justine, Ruth, John, Helene (her religious name was Sister Mary Christopher, OSU), Henry, and Joan.  My great-grandfather, Henry Pecheux, was born in 1872, and played baseball at Notre Dame for one year (probably about 1890 – the sport obtained official varsity status in 1892) before family finances forced him to return home.  Providing for a large family during the Depression was incredibly stressful.  My grandmother has told me how his accounting business went under and he worked a variety of part-time jobs to stay afloat.  His love of history and of books was something he shared with his children and grandchildren, bringing home the Oz books which he read aloud and everyone enjoyed.  Granny loved book 3 in the series, Ozma of Oz, and had a jeweled belt she pretended had belonged to the Nome King – nothing like bossing your younger sister around with a magic belt.

Anne’s mother, Helena Pollard, was an orphan brought up by the family matriarch whom everyone called Auntie.  Auntie, a widow, brought up Helena, called Nellie, as well as Nellie's brother, and two other nieces, Anna and Josie.  The cousins remained close.  Anna became a successful legal secretary in Manhattan, and it was her generosity in paying for Barnard College that changed my grandmother’s life.   The dorms at Barnard were so empty due to the Depression that everyone got a single but Granny made several lifelong friends and partied enthusiastically with the likes of Thomas Merton.  She was very bright but later admitted she did not apply herself in the classroom; instead becoming involved with various political causes.

During her senior year, Anne and her friends decided to take a course at Columbia on the History of Music.  Anne was instantly intrigued with the handsome young Hungarian professor, a rising star in musicology who had been an Olympic rower in the 1924 Olympics in Paris before he came to the United States. He, while less impulsive, told a colleague on the first day of the semester that there had been someone very interesting in his class.  Her best friend Jane dared her to ask him out when she (Anne) was "a little tight".  Probably they both were!  But Granny always specified that though she accepted the dare while under the influence, she was sober for the ask!  She told Professor Lang that because he had mentioned not having gone to the theater much she thought it might be nice to go see Murder in the Cathedral the following Friday. But when she went to get tickets she realized she had asked him for Good Friday when there would not be a performance.  She was very embarrassed when she told him her mistake and was tempted to just forget the whole thing, but instead bullied her best friend to call the professor (pretending to be her) to make some excuse.  To their surprise he said that he had realized there was no performance the night in question and had taken the liberty of getting tickets for the following weekend.  And that's when Anne realized that he must actually want to go on the date.   My sister Andrea says she has a small amount of corroborating evidence -- Murder in the Cathedral opened on Broadway March 20, 1936, so the timing makes sense.  Good Friday was April 10th that year.

They were married on August 1.  Paul Henry Lang continued as a professor of musicology at Columbia until he retired and they had four children, of whom my mother is the eldest.  They were married for fifty-five years.
Granny was passionate about many things, particularly animals, politics, and the Catholic Church (and not always in that order).  She always loved New York City although she never lived there again after college and the first year or two of her marriage.  She and my grandfather lived in various places but my favorite was their house in Chappaqua, New York.  It had begun life as Horace Greeley’s barn and had been converted to a residence by his daughter (the Greeley connection was especially suitable because he was the legendary editor of the New York Herald Tribune and later my grandfather was the music critic for the Tribune).  My grandfather turned Gabrielle Greeley’s ballroom into a massive library, with books on all four sides, a grand piano, a bearskin rug, and a desk made out of a door.  When I was sent as a child to say goodnight, I would find him at the opposite end of the long room in deep thought, smoking a pipe like Gandalf.   He wrote his books in that library and Granny edited them.  He dedicated Music in Western Civilization to her: it says, “To Anne, who Watched, Guided, Waited, and Understood,” and is still a Norton bestseller.

As the eldest grandchild, I had a special bond with my grandmother, nicknaming her Bemama when I was little, and then graduating to “Granny” which she hated.  “Call me Grand-mère or Nonna,” she insisted but it was too hard to break the habit.  She was a magical figure in my childhood: the source of great presents and endless bags of M&Ms, and she always seemed to be laughing.  Although she had a penchant for arguments, she was always extremely generous to family and friends alike: later helping me with the down payment of my Upper East Side apartment (although she disagreed about where I should put the dining room table and never stopped telling me it was in the wrong place) and once offering to buy “church shoes” for every altar server in her Kent, Connecticut church because she was afraid their parents could only afford the sneakers she found inappropriate (she was hurt when the priest turned down her offer). She had a wonderful sense of style and we always felt that she could have been a very successful interior designer had she sought a career.
Even in her last months, Granny remained very interested in what was going on with her family, wondering if my brother Peter had met Pope Francis yet, expressing satisfaction when I quit my unpleasant job in December (“Take that, Bruce!” she said triumphantly, as if she knew my difficult boss, rather than had listened sympathetically for two years), and asking for extra copies of my grandfather’s books and even my father’s book so she could bestow them on various people she was convinced were longing to read them (whether they were or not).  Although a poor recovery from a broken hip made the past year painful and she resented not feeling well enough to attend Mass, she was glad to see every visitor and especially appreciated the February visit of Peter from Italy with three of her great-grandchildren.
We miss you, Granny!  Going through your books was especially sad for us but, among many treasured volumes, we found the following and wondered about its provenance.  Surely bought to commemorate that first date?! 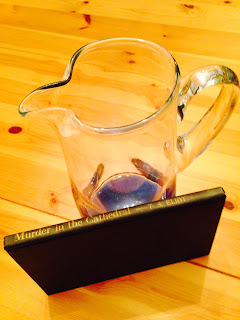 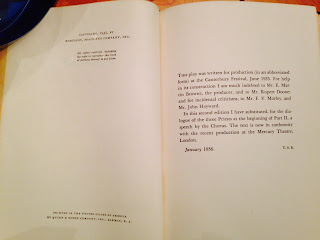 This post was revised on August 24, 2015 to correct inaccuracies although I liked my version better!
Posted by CLM 2 comments:

A Touch of Stardust (Book Review) 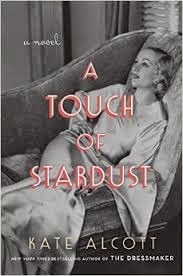 Plot:  When Julie Crawford arrives in Hollywood, fresh from Smith, she is just in time to witness the “burning of Atlanta” scene staged by David O. Selznick on the Gone with the Wind set – and she is hooked on show business albeit intimidated by the great man.  In a refreshing twist, Julie is not a wannabe actress but an aspiring screenwriter.  And on her first day, she also encounters legendary actress Carole Lombard – like Julie, from Fort Wayne, Indian – who is romantically involved with Clark Gable.  Julie also meets Andy Weinstein, Selznick’s right hand man.  Lombard gives Julie a job as her assistant, which gives Julie a front row seat at the glamorous life of Hollywood stardom.  And as Julie finds her place in the movie world, her friendship with Andy becomes something more. 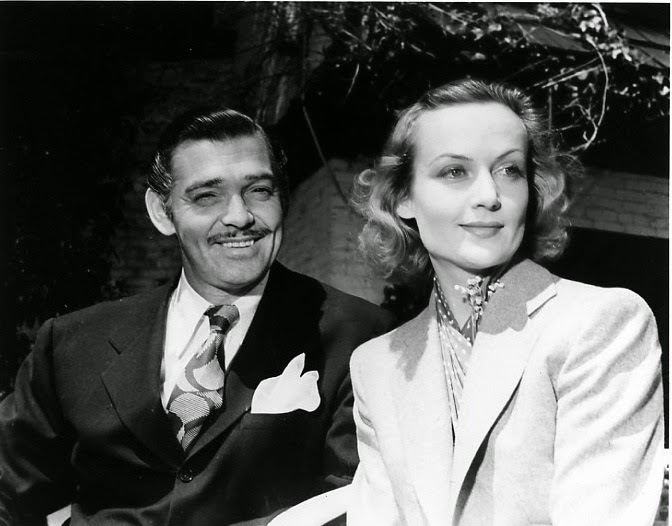 What I liked: Alcott does a fabulous job of bringing the reader into the magical world of Gone with the Wind.  Even casual fans know about the search for the perfect actress to play Scarlet but it’s even better when you feel you’re yards away when lovely Vivien Leigh visits the movie set and wills Selznick to choose her so she can be close to Laurence Olivier.  Telling the making of the movie story from the perspective of a bright young woman, new in town, is a clever technique.  We identify sufficiently with Julie to want her to succeed but it’s the glimpses of Lombard and Gable’s romance and of Vivien Leigh and the behind the scenes filming of GWTW that make this book impossible to put down.

I especially liked how Alcott made Lombard so appealing in this book.  I wonder if she really was helpful to younger women trying to make their mark in Hollywood.  My admittedly limited knowledge of her indicated only that she was bawdy and died young.

I’ve had my eye on this author for a while but hadn’t got around to reading her earlier books.  She credits her husband, descended from Hollywood’s Mankiewicz family, with telling her stories about this era, and she even sets one scene at the home of writer Herman Mankiewicz.

What I disliked: Julie’s and Andy’s romance is not as interesting as Lombard and Gable’s.  It reminded me of something Susanna Kearsley mentioned at a recent reading, which is that when she writes a back and forth novel, she intends for the contemporary couple to be more of a foil for the historical.  Here, while I liked Julie’s character and enjoyed learning about her travails trying to make a living as a screenwriter and persuading her conservative parents not to drag her back to Indiana, I was much more interested what her life revealed about the movie.  Alcott acknowledges this, providing an epilogue describing what happened to the actors and stating that Julie is meant to be the Everywoman “who strikes out with a small arsenal of choices” and uses them to achieve her goals.  I did wonder if a nice girl from Smith would have been so quick to get physically involved even if Andy is strikingly handsome and kind.

Andy’s depiction of the anti-Semitism in Hollywood seemed authentic and accurate, although it distracted from the movie, which I was more interested in reading about.

Source: I read pre-pub reviews and put this on reserve from the library, and it duly appeared several months later. Highly recommended. 4 1/2 stars.
Posted by CLM 1 comment: