Saturday we woke up early and had tea and toast at the Arriva Hotel before taking an Uber to Liverpool Street Station (had I been in a taxi I would have been annoyed as it did not seem like the most direct route based on my inspection of the map) and then a train to Cambridge. It was a good half mile to the guest house but our suitcases wheeled along obediently, and soon we had lightened our load and set off for the university part of town.

We signed up for a tour of Cambridge including King's College, founded by Henry VI in 1441. There was just time for tea and scone for me/soup for my mother and a quick visit to the renowned Haunted Bookshop before the tour. Book count: just one - Hester Burton's No Beat of Drum. I also resisted the offerings in David's Bookshop and two tables of paperbacks in a church that were only 30 pence each!
The tour, made very enjoyable by guide Andrew (so full of interesting commentary that my mother didn't even object that he told her things she already knew), lasted until 4:15 so we had to run to the Fitzwilliam Museum before it closed at 5 pm. There was only time to see some of the paintings and I spent about 10 minutes in a sampler exhibit that had interested me.
Although extremely tired of walking by this point, I felt it only right that we pay our respects to Emmanuel College, alma mater of John Harvard, the poor minister whose deathbed bequest to the "schoale or colledge" founded two years earlier gave it his name . . . It turned out to be one of the prettiest we had seen and the porter gave us permission for a quick look at the courtyard and gardens, which included a duck pond. Extra credit: Where is John Harvard buried?

We walked slowly back past the Fitzwilliam to Brown's restaurant, a charming place with high ceilings in part of a converted hospital. The host took pity on us for not having a reservation and found us a table. We dined on schnitzel and warm sourdough bread and Prosecco.

Answer: John Harvard is buried at the Phipps Street Burial Ground in Charlestown, created in 1630. 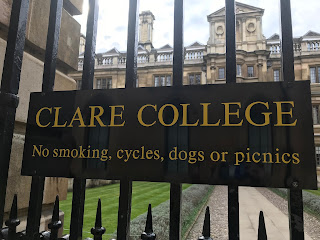 Goodness. I am guessing that you and/or your mother are familiar with England otherwise I cannot imagine how you are able to fit in so much the minute the plane drops wheels at Heathrow. I look forward to reading more of your adventures. I'm planning to take my mother on a garden tour of England in 2019 so I am doing a bit of vicarious eavesdropping as well.
Cheers,
Jessica

We were very tired but we knew if we collapsed we'd lose a whole day! My mother and I are both English history majors and have been to England before, although never together, so we had a lot of ideas about how we wanted to spend our time. A garden tour sounds wonderful. I'd be happy to share some ideas, if helpful, after I get home.