I was in Denver this week for work and had a lovely dinner with six other Betsy-Tacy fans.  One told me she had just finished reading Meet the Malones and she wrote about it here.  Don’t you love a convert? 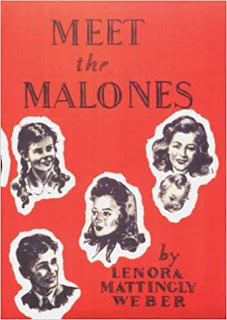 Somehow I found myself vacuuming under and behind my bed recently!   Don’t worry, it probably won’t happen again due to the fact I found ONE jade earring bought in Canada at a friend’s wedding.   I am afraid the other one was vacuumed.   Is it worth going through the vacuum bag to check?  Even if I find it, would it be too gross to ever wear again?
I loved Ellen Klages’ book set in Los Alamos, The Green Glass Sea (and the sequel), and recently told a friend from New Mexico about it.   She had not read it but described another, which intrigued me.  I found Where the Ground Meets the Sky, which I also liked, but she said that wasn’t the one.  Do you know of others with this setting?
Today I came across a scholarly article: The Story of the Story: The Willow Pattern Plate in Children's Literature by Ben Harris McClary, and delayed my real research to take a look, thinking, “Ah, someone who appreciates Doris Gates.”  I paused to think about how once a job interview turned into a discussion of Doris Gates and Lenora Mattingly Weber (Reader, I got the job).   However, Professor McClary who was chairman of the English Department at Middle Georgia College in 1982 never appears to mention Blue Willow, which was published in 1940, a Newbery Honor Book.   I am afraid he died in 2013 so it is too late for me to point out the error of his ways (errors of his research).

Why do I invariably yearn for chips immediately after going to the gym?  If I succumb, it undoes all the virtue of running and lifting weights.

(PS - I found the missing earring only a few weeks later and had not lost the first one!  A win!)
Posted by CLM

I love the original cover of The Green Glass Sea. The Greek letters (and, I think, mathematical notations there too?) are glossy on the dust jacket. I do think, though, that it looks more like an adult novel, so I can see why they changed it.The first paperback edition had an all black cover with a keyhole that showed the hardcover image underneath. It's very striking, but as a one-time bookstore employee,I know keyhole covers are very easily damaged.

The Green Glass Sea new paperback was released at the same time as Klages's baseball novel, Out of Left Field, to match the cover of that book (which is the same in hardcover and paperback). White Sands, Red Menace has not been repackaged that I can see.

I was surprised, looking at a popular retail site, to see these books listed as the series "Gordon Family Saga." "Saga" seems like absolutely the wrong word for these books, which are specifically written as small, intimate stories about people who are part of world events.