Time for another round of Bookshelf Traveling in Insane Times which is being hosted by Judith at Reader in the Wilderness.  It's an opportunity to look at your bookshelves and rediscover titles you read or plan to read. This shelf in my guest room caught my eye as I was, of course, looking for something completely different last night - a book about a WWII evacuee, in fact, as one does from time to time. 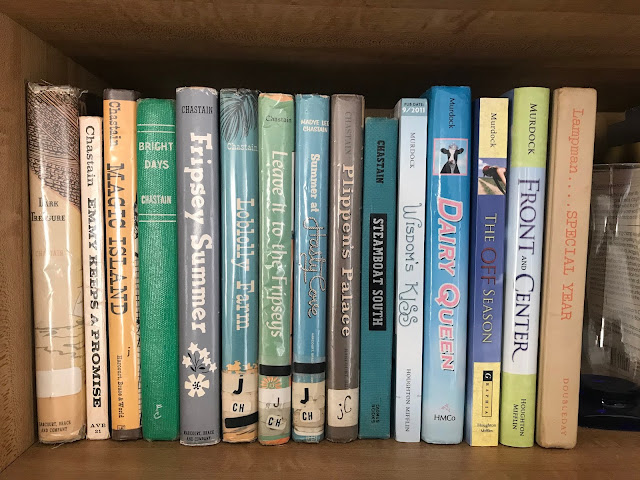 Looking at this shelf brings back my childhood and my favorite library, where I found most of Madye (pronounced MAY-dee) Lee Chastain’s books.  Chastain (1908-1989) was a children’s author and illustrator,  and I am a huge fan of the 12 middle-grade novels she wrote.  Seven are historicals and five have contemporary settings.   My favorite is Emmy Keeps a Promise, the second book in a trilogy, and apparently the only one of her books Harcourt published in hardcover and paperback.  It is a warm and affectionate story of sisters Arabel and Emmy Thatcher trying to make their fortunes in 1850s New York.


When Arabel (19) secures a teaching position at Miss Fenwick’s School for Young Ladies, she negotiates tuition for eleven-year-old Emmy as part of the deal.   Sorry to see them leave upstate New York, their aunt urges Emmy to find Arabel a nice husband but the orphaned sisters are proud and want to be independent.   Even Emmy finds a job at a button store after school.  The picture Chastain draws of 19th century New York is charming, the sisters’ delight in their new surroundings, even with no money, is fun to read and her illustrations are perfect.  Dark Treasure, which precedes Emmy Keeps a Promise, and Pippen’s Palace are also set in Manhattan. 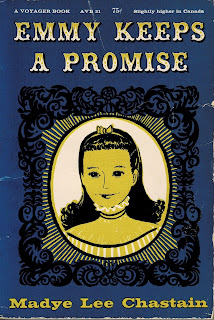 Chastain also wrote a four-book contemporary (as in 1950s) series about the irrepressible Fripsey family.  I don't own Fripsey Fun or a historical, Jerusha’s Ghost, if you see either at a reasonable price.  Her devoted fans snap up ex-library copies when they find them (I keep thinking how sad I will be if library sales become extinct and how relieved my family will be).   Chastain was born in Texas, studied at Oglethorpe University in Atlanta (like my grandfather), and met her husband in New York where they were both students at art school.  Her papers are at the University of Oregon and at the de Grummond Collection at the USM where I am a graduate student. You know I am going to visit those papers in the future when I make it to campus!
Next to Chastain’s assertive but distinctly feminine heroines is Catherine Gilbert Murdock’s fairly recent Dairy Queen trilogy (2006-2009) about a quiet Wisconsin farmgirl who decides to try out for the high school football team while reluctantly falling for the opposing quarterback.  This is a very funny YA series (with serious moments) and far more enjoyable than Eat Pray Love etc. by the author’s older sister. 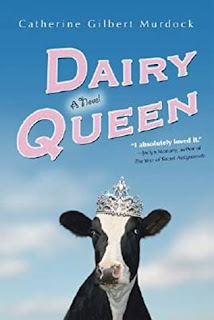 Then back to the 1950s with Special Year by Evelyn Sibley Lampman (1907–1908), an autographed copy I bought from a friend. Lampman had a long and fairly prolific career as a children’s and young adult author and the Oregon Library Association established an award in her honor.  This is a YA title about eighth grade best friends Allison and Dorothy and the year they discovered boys and growing up. This is a world where wearing the wrong cardigan can make you a pariah or a cool kid.

“Your sweater,” explained Natalie, in answer to Allison’s blank look.  “It’s just like mine.  You didn’t knit it yourself, did you?”

“No,” gulped Allison weakly staring.  Above the straight pink cotton dress was a pink cardigan with daisy buttons running down the front.  It was knit in an intricate all-over design, with the sleeves in one piece.  “My grandmother did.”

“My mother knit mine,” smiled Natalie.  “I can’t knit this well.  I can sew, though.  I made most of my own clothes . . . . It’s one way to keep from looking like everyone else,” laughed Natalie.

It takes this tip from a high school senior to help Allison start the process of growing up – to realize she doesn’t have to be like everyone else and to start standing up for those tormented by her peers. 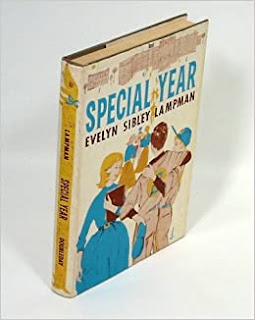 I love fiction books with illustrations, did all of Chastain’s books have illustrations? It does seem like they would be hard to find.

The Dairy Queen trilogy sounds very interesting, although I don't usually read YA fiction. I am sure I am missing things, but I have so many genres and authors I am trying to keep up with.

I've never heard of any of those authors and I suppose they'll be just about impossible to find in a secondhand bookshop here in Scotland, but I'll look out for them, you never know your luck.

I enjoy it so much when people share the books they loved as older children and teens. I almost think I remember Emmy (Emma?) Keeps a Promise. Your description of that series sounds rings some distant bells for me, for sure. And The Dairy Queen series--I should have been aware of this one. I looked them up online and they seem like lots of fun, and I am a kid at heart.