It's time for a round of Bookshelf Traveling in Insane Times which is hosted by Judith at Reader in the Wilderness.

The idea is to share your bookshelves. Any aspect you like, as long as you are entertained, including:
1. Home.
2. Books in the home.
3. Touring books in the home.
4. Books organized or not organized on shelves, in bookcases, in stacks, or heaped in a helter-skelter fashion on any surface, including the floor, the top of the piano, etc.
5. Talking about books and reading experiences from the past, present, or future. 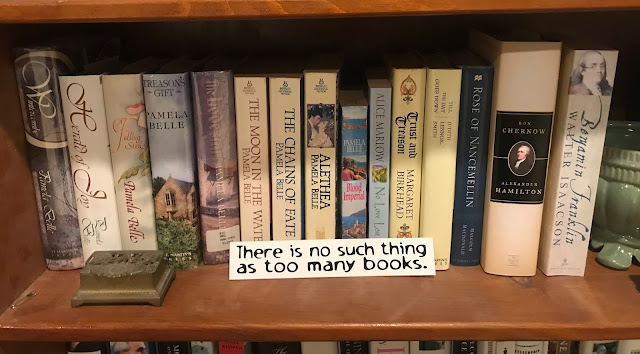 I chose a shelf in my living room that is pretty much devoted to historical fiction, featuring one of my all-time favorite books, Wintercombe by Pamela Belle.  Set during the English Civil War in the 17th century, this is the story of Silence, Lady St. Barbe, and her family, Puritans besieged by Cavaliers (I am for King and Country myself but these particular Cavaliers are not very appealing, with one obvious exception).  When Charles I’s debauched soldiers insist on moving into the estate, with no regard for the family, they bring chaos to Silence’s well-managed home and one of them breaches her heart.  Silence is a wonderful heroine: brave, capable, kind, and possessing a sense of humor she needs to keep hidden.  The book is full of memorable characters, many of whom appear later in the series.   I am happy to report it’s available as an eBook and a careful reader could make it last until her state reopens, depending on where she lives and how fast she reads!  It seems to be on sale.


Belle also wrote two books under the name Alice Marlow (one appears to be AWOL from its shelf - don't you hate those wandering books?) which are contemporaries and has also set books "during the reigns of Richard III, Elizabeth I, Charles II, James II, the England of Alfred the Great, and London in the early 18th century." They are all well worth reading.   And isn't it amazing that despite having read Wintercombe several times, once I started thinking about it I had to take it upstairs with me last night and read until nearly 2 am? 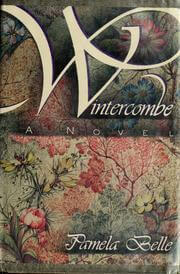 The other historical fiction on the shelf includes two very well done 16th century novels, Trust and Treason by Margaret Birkhead, who wrote only one book, and Till the Day Goes Down by the prolific Judith Lennox Smith.  I recommend both.  Lennox dropped the Smith after this book, which is my favorite of her books (most are hard to find in the US, unfortunately).   And, finally, Malcolm MacDonald who also writes historical fiction; some resemble more literary versions of Catherine Cookson sagas (not that there is anything wrong with that).  He has a funny bit on his website explaining his various pseudonyms.  His book is waiting to be read.
The two 18th century biographies on the right-side of the shelf really don’t belong there at all!   Wrong genre and wrong country!  Both were books of my grandmother’s that I kept after she died in 2015 (she used to keep her stamps in the little metal box on the left).  I guess there wasn’t any place else where they fit (at least they belong together). I read parts but not all of the Hamilton bio before it was a thing but have not read Benjamin Franklin yet.

Still, we have had a lot of rainy days lately and I have a favorite Benjamin Franklin quote:


“The person who deserves most pity is a lonesome one
on a rainy day who doesn't know how to read.”

Photo Credit:  I don't know Vince Hawthorn but his lovely pictures of Great Chalfield Manor, which is in Wiltshire, made me go get the book down from its shelf (so much for Dept. of Speculation which I was planning to read tonight but found tedious).  My mother and I long to visit this manor and perhaps to coax author Pamela Belle to tea on our next trip to England.

Delightful post, I love looking at other people's shelves. I just nipped over to AmazonUK and bought Wintercombe for the princely sum of 99p. Thanks for the rec, it sounds excellent.

Oh, I am entranced by Wintercombe and that series of books. The number of pages made me catch my breath (624 pages), but I am inscribing this series and its author in my list of books I want to read. A fascinating bookshelf! Thank you for writing about all of them.

That is a lovely shelf of historical fiction. I read more historical mysteries than straight historical fiction, but this year already I have read several books in that genre. I too grabbed a ebook copy of Wintercombe; it is very long but the first few pages read well. Malcolm MacDonald sounds like an interesting author.