Simon the Fiddler by Paulette Jiles, author of News of the World 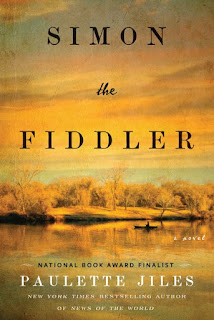 Plot: In March 1865, the long and bitter War between the States is winding down. Until now, twenty-three-year-old Simon Boudlin has evaded military duty thanks to his slight stature, youthful appearance, and utter lack of compunction about bending the truth. But following a barroom brawl in Victoria, Texas, Simon finds himself conscripted, however belatedly, into the Confederate Army. Luckily his talent with a fiddle gets him a comparatively easy position in a regimental band.

Weeks later, on the eve of the Confederate surrender, Simon and his bandmates are called to play for officers and their families from both sides of the conflict. There the quick-thinking, audacious fiddler can’t help but notice the lovely Doris Mary Dillon, an indentured girl from Ireland, who is governess to a Union colonel’s daughter.
After this brief meeting, Simon and Doris go their separate ways. He moves around Texas seeking fame and fortune as a musician. She must accompany the colonel’s family to finish her three years of service. But Simon cannot forget the attractive Irish young woman and vows that someday he will find her again.

My Impressions: Historical fiction is my favorite genre and because this Civil War/post-Civil War setting is a time frame I rarely read, it was new and interesting to me.   Simon is an angry young man – aware of his temper and trying to control it – yet he is surprisingly capable of friendship.  Most of the book is about the cast of characters he attracts to form a ragtag band and how they scrape together what passes for a living in rural Texas.  But running like a ribbon through the story is a fateful encounter he has with a young woman who came from Ireland as an indentured servant.  Simon falls for her without really knowing her; he has had a lonely life and yearns for a marriage and a settled home:

His first problem was to find a girl who would fall in love with him despite his diminutive stature and his present homelessness.  The right girl.  He had not been a celibate; nobody growing up in the river-port town of Paducah, Kentucky, on the Ohio or playing saloons in Texas could lay claim to a life of sinless perfection, so perhaps he had no right to make demands, but the girls he had met and courted, briefly, had no comprehension of 9/8 time.  They regarded him as a poor choice given his occupation as a traveling musician – always disreputable – and his stubborn, relentless dedication to his fiddle.

Although the book is not a romance in the usual sense of the word, if you consider an alternative definition, “a quality or feeling of mystery, excitement, and remoteness from everyday life,” it captures the pleasure Dora takes in the prosaic aspects of her new country. Simon finds her enthusiasm very appealing as they begin an unusual correspondence and he consumes her letters:

He read this over several times.  She was not a creature of displays and stratagems, the natural world delighted her! She was not avid for social events and the endless striving of towns!  He came to this conclusion on the strength of that one sentence.  He scattered mental exclamation marks throughout his own thoughts.

I find it comforting that they are entranced by each other’s letters (and am also amazed that letters actually reach their destinations) as that constitutes a form of acquaintance. While it is extremely plausible that Simon would build her up in his mind and that she, miserable in her position, might find him intriguing, they have little in common.  Somehow the author creates such a sense of connection between this unlikely couple that the reader is shipping them ardently, although Damon, who knows Simon wonders “what woman would be happy with a man whose need for solitude was so great, if Simon was heading for marital disaster.”  We will hope for the best!  Those who read Jiles’ News of the World, which my book group enjoyed in 2017, will remember and appreciate her storytelling, unlikely companions, and what the publisher calls her “trademark spare yet lilting style” and will find it again in this new book.

News of the World: Simon and Doris made an appearance in that book, which I must admit I had forgotten!   The movie is in post-production and Tom Hanks plays Captain Kidd.

Source: I received a copy of this book from the publisher and TLC Book Tours for review purposes. You can visit other stops on the tour and read the reviews by clicking below:

I loved News of the World and can't wait to see the movie, but I really need to read Simon the Fiddler because I kind of loved Simon and Doris and I was hoping for more. Thank you for being on this tour! Sara @ TLC Book Tours