Once school gets out for the Christmas holiday, the trio has an important engagement.  Every year on the first day of Christmas vacation they go shopping together.  This year they decide to invite Winona.  They’ve been playing with her a lot and having fun.  Now they are amused at how she will navigate their shopping expedition.

“We’ve done it the same way ever since we were children,” said Betsy.  “We always take ten cents apiece, and we always buy just the same things.”

They liked to tease Winona because she was such a tease herself. 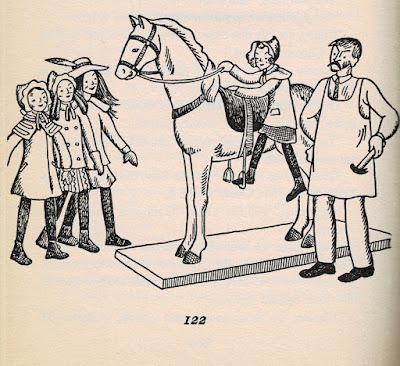 After the mail comes (with nothing for Betsy), they call for Winona and head downtown.  The streets are full of sleighs and cutters.  They stop in every store and examine everything in detail.  They visit Cook’s Book Store where they bought the replacement copy of Lady Audley’s Secret.  They visit the harness and saddle maker’s shop where Tib climbs on the wooden horse in the window (there is a little recognition of the negative aspects of technology – the hardness and saddle maker is worried the horseless carriage will put him out of business – and he is likely correct).  They visit the hardware store where one can, amazingly, buy a horseless carriage.  They visit Lion Department Store, the drug store (where they sample all the perfume), and the jewelry store where they are not allowed to try anything on.  Finally, they wind up at the toy store which is full of beautiful dolls, an expensive dollhouse, and much else.   Winona is impatient and asks if they can use their dimes for something to eat.

“We don’t.  But after we’ve spent them, we go to call on our fathers.  And you can’t call on four fathers, without being invited out to Heinz’s Restaurant for ice cream.” 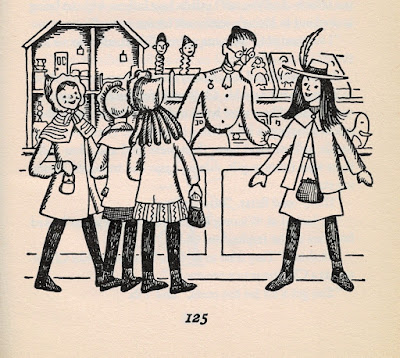 Betsy, Tacy and Tib take Winona down to the back of the store where there is a table of iridescent Christmas ornaments.

“Nothing,” Tacy tried to explain, “is so much like Christmas as a Christmas-tree ornament.”
“You get a lot for ten cents,” said Tib.

They gave themselves then with abandon to the sweet delight of choosing.  It was almost pain to choose.   Each fragile bauble was gayer, more enchanting than the last. . .

They yielded their dimes and the lady with the eye glasses wrapped up the four packages.

Betsy, Tacy, Tib and Winona went out into the street.  The afternoon was drawing to a pallid close.  Soon the street lamps would be lighted.

“Which father shall we call on first?” asked Winona.

They walked to Ray’s Shoe Store, holding Christmas in their hands.


And this is the inspiration for the famous Maud-L Ornament Exchange!

You mentioned that Laura Lippman was a Betsy-Tacy fan in a previous Bookshelf Traveling post and I was reminded of this in Sunday's Los Angeles Times. There was a section of quarantine diaries from various authors, and in one quote from Lippman's diary, she mentions her "beloved books" and notes the Betsy-Tacy books by Maud Hart Lovelace among them.