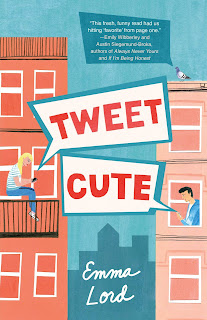 Plot: Overachieving but well-intentioned Pepper Evans juggles high school and acts as the unofficial social media guru for her mother’s restaurant chain, Big League Burger.  Jack Campbell, often overlooked in favor of his identical twin, Ethan ( the student council president type), is often found behind the counter of his parents’ deli, Girl Cheesing, in the East Village.  These two Stone Hall Academy students come into conflict when Big League Burger appears to steal the cherished family recipe for Grandma’s Special grilled cheese!  First, they face off on Twitter but when their feud goes viral, fans start rooting for them to be romantically involved -- the rivalry soon affects their families too!  At the same time, Jack has created a secret app for Stone Hall Academy students to chat anonymously and “Wolf” and “Bluebird” don’t know (although the reader does) that while their virtual selves are becoming close their real selves are squabbling – although are reluctantly learning to appreciate each other.   What will it take to make Pepper and Jack speak up and admit they are romantically interested?

My Impressions: This is a fun if implausible story with entertaining protagonists and appealing minor characters as well.  Everyone likes an enemies-to-lovers theme and the banter between Pepper and Jack is well done.  There are villains – Pepper’s mother who is so self-centered it is surprising Pepper doesn’t have a nervous breakdown –  and Ethan who has no common sense and cherishes a surprising resentment of his brother.
One of the things that is great fun are the crazy desserts Pepper and her sister Paige concoct (and manage to consume without getting ill) and when Pepper starts bringing samples to Jack you know she is developing a weakness for him.  Jack is kindhearted and comes through for Pepper in a crisis:

Before I can ask, he blows out a breath and says, “So who are you meeting with? Yale? Harvard?”
. . . “Columbia.”
Some of the bravado seems to leak out of Jack’s expression.
“What?” I ask, off his look.
He hesitates for a moment. “You know Columbia’s interviews are on their campus, right?”
My blood turns to ice. “What?”
And then, suddenly, it makes sense: why I don’t see Pooja or the other Columbia hopefuls here.  Why there isn’t a sign-in for the Columbia rep yet.  I just assumed it was because I was here absurdly early, the way I always am. It didn’t once occur to me it was because I’m an idiot.

I liked Jack already but he totally won my heart when he rushes Pepper by bus to the Columbia campus so she doesn’t miss her college interview.

Pepper also learns that Pooja, who she thought was her biggest rival in the class, was really turned off the school’s competitiveness and has been leading a study group for their classmates.  I don’t mind that Pepper finds out helping others is just as satisfying as being first in the class (although I don’t think this happens on the Upper East Side of NYC – I used to live there) but I was worried she wasn’t allowed to be ambitious.  And I liked that Jack’s family turns out to be complicated too, with a twinkly knowledgeable grandmother and a mother who both understand him. It’s sappy but finding each other helps both of them deal with family pressure, even though I didn’t see why the author made it seem as if wanting to go to an Ivy League school is wrong, rather than that being obsessive to the point of a nervous breakdown is generally bad or not standing up to your mother when she acts irrationally without explaining why or derails you from focusing on your homework.

How about a young Reese Witherspoon playing Pepper and young Matthew Broderick for Jack?  I don’t know any of the age-appropriate actors, alas.
Source: Library