Time for another round of Bookshelf Traveling in Insane Times which is being hosted by Judith at Reader in the Wilderness.   The idea is to share one of your neglected bookshelves, and this bottom shelf is truly a mixture of books read and unread. 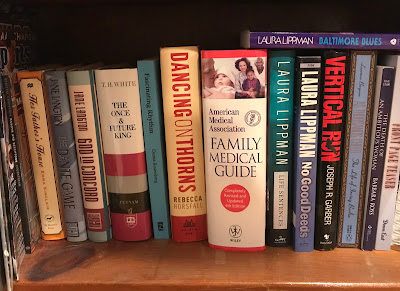 My mother read The Sword in the Stone to my sister and me when we were about 6 and 9, and I read the rest of The Once and Future King as a teen, finding a copy identical to hers at the Barnes & Noble buying office around 2000.   It was like a treasure trove there and I rarely left empty-handed.  Back in the day, the B&N bookstore buyers received a copy of nearly every book published, most of which they didn’t want, so would pile them on shelves in the hall.  Even after budgets got cut, we still sent copies of books we thought someone would like or should see.   However, once with great difficulty, I got Ken Dryden’s memoir autographed for the sports buyer and on my next visit I saw it discarded on a shelf.   “Lisa!  Did you even notice it was inscribed to you?!” I said with annoyance, forgetting the client is always right.   The freebies were really not meant for the publishers’ sales reps but if we saw something we wanted we would either grab it or ask for permission to grab it!


I haven't felt the same about T.H. White since I read H is for Hawk, which was fascinating but very disturbing.   Sometimes one is better off not knowing much about an author. 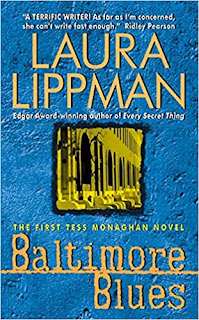 Laura Lippman gets the most attention.  One day, many years ago, Carrie Feron, a gifted editor at what was then Avon Books, pitched a debut mystery with a wonderful sense of place called Baltimore Blues.  “Wait a minute!” I said, “I’ve read her work.”   Laura is an unabashed Betsy-Tacy and Beany Malone fan, hiding a mention or clue of one or the other in each of her books.  She is currently writing big standalone suspense novels and made time to come to Deep Valley, MN two years ago as keynote speaker at the last Betsy-Tacy convention.
Jane Langton, who died two years ago, provides one of those shelving dilemmas.   She is best known for her children’s books, which live upstairs and are big favorites. But she also wrote a few quirky adult mysteries, set in Boston, that reside downstairs.  There was a lunch for her while I was working at Penguin and I told her how much I loved The Diamond in the Window, et seq., and she drew me a map of the actual house that inspired her.   After the lunch, she sent me an autographed copy of God in Concord in which she had sketched Henry Thoreau on the front endpaper.  Very thoughtful!  But on the facing page, she inscribed it to Connie!  Of course, she didn’t know I hate that nickname but it sort of wrecks the book! I don’t even like her mysteries but how can one give away an autographed book with a Transcendentalist sketch? 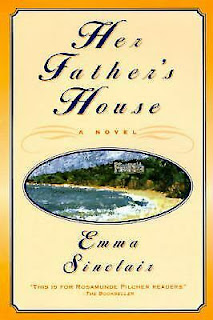 There are books about Irving Berlin and the Gershwin brothers; the AMA Family Medical Guide from my last job in publishing; a really good thriller called Vertical Run; two mysteries I haven't got to; Dancing on Thorns, which I have read but don’t remember;  and Her Father’s House, which I have not read but it looks like Cath can add to her Cornwall list!  I’ll have to read it to be sure . . .
Posted by CLM

What an interesting post. I've not heard of Her Father's House but will add that to my Cornish books list as I looked at it on Goodreads and it does appear to be mostly set in Cornwall. In fact 'Veryan' - the main character's surname - is a village in Cornwall.

I have read a few of Jane Langton's mysteries and like them mostly for the drawings. I can read them if I space them apart. The last one seemed very sexist, with Homer Kelly discounting everything his wife says.

So interesting to see several Jane Langton books on the shelf! Do you by any chance have a favorite book among hers? Curious about the Irving Berlin book as well. And Her Father's House--will add that one to my list!

It sounds like you had a dream of a job. I also loved the T.H. White books and they set me off on a bit of an Arthurian binge later.