Now that she has been to the theatre to see Uncle Tom's Cabin, Betsy is curious about her actor uncle.  Mrs. Ray clearly misses her brother very much since he ran away from home.   She describes how he looked like her with red wavy hair and had Julia’s skill with singing and piano but also wrote stories like Betsy.  Betsy absorbs every word. 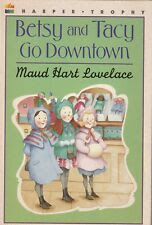 “He wrote poems, plays, stories, everything.  He was always scribbling, just as you are. And that reminds me, Betsy.  Isn’t it getting pretty cold to be writing up in the maple tree?”


Mrs. Ray knew all about the office in the maple tree.  She had given Betsy the cigar box.  Betsy’s mother was a great believer in people having private places.
“Yes, it is,” said Betsy. “I haven’t been writing lately.”
“You must bring your papers indoors then.  Your father and I are very proud of your writing.  We want you to keep at it.  You ought to have a desk but we can’t afford one yet.  I’ll find a place for your things though.”

Mrs. Ray’s solution is to give Betsy Uncle Keith’s trunk as a desk.  She and the hired girl move the trunk into the girls’ room and she organizes it so the costumes are below a shelf where Betsy can put her things, and the trunk can function as a window seat when not serving as literary inspiration.   She thinks of almost everything – a pencil case, an eraser, a dictionary (she does not seem to realize Betsy really needs a pencil sharpener!).   Although Mrs. Ray never asks to read Betsy’s stories without permission, Betsy is suddenly self-conscious about her recent stories and holds out the notebooks for her mother to see the melodramatic titles: Lady Gwendolyn’s Sin, The Tall Dark Stranger (foreshadowing!!!! I never noticed this before!), Hardly More Than a Child.

Mrs. Ray looks very serious.  She guesses that Betsy has been reading Rena’s dime novels and says it is a mistake, not because there is anything wrong with them but that Betsy needs to read good books that will expand her horizons and make her a better writer.  She asks why Betsy doesn’t read the books in the family bookcase, and Betsy explains that she has read them all.

Betsy felt ashamed.
“I’ll throw those stories away if you want me to,” she said.
“No,” answered her mother.  “Not until you want to.”  She still looked thoughtful.  Then her face lighted up as it had when she thought of using Uncle Keith’s trunk for a desk.

Mrs. Ray has a wonderful idea that she consults with Mr. Ray on before they reveal it to Betsy.  They tell Betsy that the Carnegie Library is about to open in Deep Valley, and that she can go there every other Saturday to read the classics and to check out books for two weeks.  The library is “way down town but you’re old enough now to go down town alone. Julia goes down to her music lessons since the Williamses moved away, and this is just as important.”   Mr. Ray gives Betsy 15 cents so she can go to a nearby bakery for lunch as part of the excursion.

“Oh, papa!” said Betsy.  She could hardly speak.
She thought of the library, so shining white and new; the rows and rows of unread books; the bliss of unhurried sojourns there and of going out to a restaurant, alone, to eat.
“I’d like it,” she said in a choked voice.  “I’d like it a lot.”

“Betsy was so full of joy that she had to be alone.” She goes up to her room and sits on Uncle Keith’s trunk and thinks about all the stories she is waiting to tell.  Then she puts the tablets with the melodramatic stories into the stove and asks her father if he can bring home more tablets from the shoe store.

Chapter 7, A Trip to the Library

If you thought Betsy was excited to go to the theatre, imagine how thrilled she is to visit the library!  Her smile is too big for her face, she is wearing her Sunday hat although it is about to snow, and she has borrowed a pocket book from Julia to hold her 15 cents.  It is hard to say goodbye to Tacy who is usually by her side but Tacy, the perfect supportive friend, doesn’t whine or try to make Betsy feel guilty as some friends might.

But at the corner she hugged Betsy’s arm.  She looked into Betsy’s eyes with her deep blue eyes that were always so loving and kind.
“I want you to go,” she said.  “Why, I’ve always known you were going to be a writer.  I knew before anyone.”
Betsy felt all right about going then.  She kissed Tacy and went off at a run.

(There is a lot of kissing in this chapter! You’d think she was never going to see these people again!)   When she enters the library she is a little nervous.  She sees a large open space with a big cage in the center and “an orderly forest of bookcases, tall and dark, with aisles between.”


She meets Miss Sparrow the librarian, who is young and intense.   She settles Betsy down in the Children’s Room, offering her Tanglewood Tales, Don Quixote, Tales from Shakespeare, Gulliver’s Travels, and Mark Twain.   Betsy starts to read Tanglewood Tales but first she looks around and absorbs the atmosphere.   At noon, she explains to Miss Sparrow about going to the bakery for lunch so she can browse with the books for longer.  “What a beautiful plan!” Miss Sparrow said.
By the end of the day it is snowing, so Betsy goes to her father’s shoe store for a ride home, passing the Opera House.  To her surprise, she gets hit by a snowball, thrown by some mean boys.  She slips on the snow and is rescued by Mrs. Poppy and Sunny Jim, who works at the livery stable.   Betsy introduces herself to kind Mrs. Poppy who suggests, because she is so wet, she come to the hotel for hot chocolate with whipped cream.  Betsy can dry out there and Mrs. Poppy will telephone Mr. Ray.   Betsy accepts with pleasure.

Betsy’s parents’ understanding of her need for a quiet place to write and for the intellectual stimulation of great books is one of their most endearing traits.  They recognize her aspirations as a writer in a way that was unusual for that era.  For those who did not grow up in a house of bookworms, what did you think of the Rays’ plan for Betsy to visit the library?

We know Uncle Keith’s life can’t have been easy, from the strife with his stepfather, to running away, making a life in the theatre, serving in the army, presumably returning to the theatre.   Do you have a favorite movie or book that depicts the realities of theatre life?  There is a Gladys Malvern series I love about Gloria Whitcomb which describes the long train rides, the drafty theatres, the sloping stages – she never loses her focus, but I liked that Malvern didn’t paint too rosy a picture.

Similarly, what is your favorite book with a key library component?   I think it is hard to beat this book and the first All-of-a-Kind-Family but maybe we can come up with a list.

Did you remember Miss Sparrow was young?  Did you ever have a librarian who got you the way Miss Sparrow gets Betsy?  There was a wonderful nun in my junior high who recommended books to me.  Although I remember being shocked when she suggested The Concubine because I was a very sheltered 12-year-old and was worried the title was an obscene word (it was a great book).   She probably also recommended The Reluctant Queen, mentioned below.

Mrs. Ray is reading When Knighthood Was in Flower (1898) by Charles Major (pen name Edwin Caskoden), a historical novel about Henry VIII’s younger sister Mary Rose, whom he forced to marry the King of France although she loved his friend Charles Brandon.  I tried reading this once and believe you would prefer Molly Costain Haycraft’s version of the story, The Reluctant Queen.    I am amused, however, to read there was a 1953 movie starring Glynis Johns, better known for her role as Mrs. Banks in Mary Poppins.   I suppose she preferred more dramatic roles!

Andrew Carnegie (1835-1919), born in Scotland and raised in Pittsburgh, grew up in a family that believed in the importance of books and learning, and was a reader although he had little formal education himself.  He made his money from steel, often at the expense of his workers, and became a philanthropist later in life, donating $60 million to fund a system of 1,689 public libraries across the country.  I know a future librarian should not link to Wikipedia but this list is useful to see if there is a Carnegie Library near you; some have been torn down.  He also founded what is now Carnegie-Mellon University.

By the way, do you say Carn-a-gie or Car-NAY-gee?   Correct answer here.

The Children’s Room at Betsy’s library has a painting over the fireplace of a rocky island with a temple on it, called the Isle of Delos.  The significance is that Delos is the mythological birthplace of Apollo; it was a major religious center and port during the 1st millennium BC.  “There’s nothing more classic than Greece,” says Miss Sparrow.   The painting actually existed and it is a coincidence that Maud eventually married Mr. Delos Lovelace!  If you believe in coincidence . . .  It is a very unusual name for a person.  Baby Wizard says it has never made the top 1000 names in the United States. 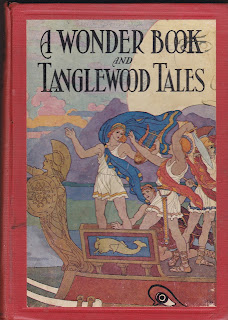 Tanglewood Tales by Nathaniel Hawthorne (1853) was a collection of Greek myths, retold suitably for children.   Hawthorne wrote it while renting a small cottage in Western Massachusetts and, later, first the cottage was renamed Tanglewood in his honor and then a local mansion was named Tanglewood.   Now Tanglewood is the summer home of the Boston Symphony Orchestra in the Berkshires.  Sadly, the outdoor concerts at Tanglewood have been canceled this year.