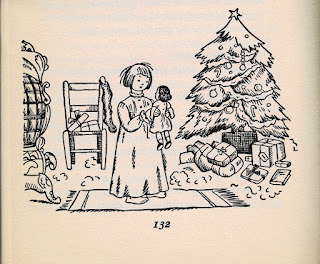 Although Mrs. Ray still seemed to have reservations about Mrs. Poppy and told Betsy she was sure they have nothing in common, the trio and Winona are allowed to go.  Betsy shows off her knowledge of the Melborn Hotel as they pass through the lobby.  Surprisingly, their mothers send them off empty handed and Mrs. Poppy has gifts for them.   She bought the perfume they tried on during their ornament expedition – the drug store salesman told Mrs. Poppy that was what they would like.   Then they play the gramophone and perform.   Betsy and Tacy do the Cat Duet.  Winona sings a sad song called The Baggage Car Ahead.  And Tib does the Baby Dance, which Mrs. Poppy admires.   Tib says she wishes she knew something else to dance and Mrs. Poppy offers to teach her.   Soon it is time for tea with ice cream and cakes and more hot chocolate and whipped cream!  The girls tell Mrs. Poppy about their shopping expedition.

When Tacy, Tib, and Winona go to ride the elevator, Mrs. Poppy tells Betsy she is looking for Uncle Keith but not to tell her mother in case she is unsuccessful.   Betsy wishes she could say her mother wanted to get acquainted with Mrs. Poppy but knows she cannot.   Instead, she talks about Julia’s singing and Mrs. Poppy expresses interest in meeting Julia.   She says to Betsy that if she could help girls like Tib with her dancing and Julia with her singing, she would feel she really belonged in Deep Valley.   Betsy doesn’t know what to say but she gives Mrs. Poppy a big hug and a kiss.

Mrs. Poppy hugged her back.  Betsy felt a wet cheek touching her own.
“Betsy!” cried Mrs. Poppy. “Betsy! Why, you’ve given me a Christmas present.”
And that was the very thing Betsy had wanted to do.

If you celebrate Christmas, do you have an ornament tradition?

Does your family do joke presents?

Would you like to live in a hotel like Mrs. Poppy?   Wouldn't it be nice to have someone else make the beds and to be able to eat in the hotel dining room all the time?   But would there be enough room for your books?

Many people know that the Cat Duet really exists but have you ever seen Kiri Te Kanawa sing it?   “The ‘Duetto Buffo di Due Gatti’ (in English: ‘Humorous Duet of Two Cats’) is unique among pretty much all Western music, classical and otherwise, for the bizarre style in which it is notated to be sung. There are no real lyrics, instead each vocal utterance in the piece is sung as a “meow,” to imitate the sounds of a cat. Though normally attributed to composer Gioachino Rossini, the actual authorship of the piece is slightly more complicated,” as this individual observes. 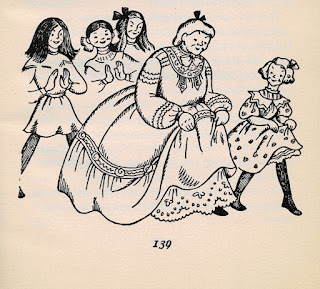 Winona sings a sad song about The Baggage Car Ahead.   MHL is probably referring to In the Baggage-Coach Ahead (1898) and it is somewhat melancholy.  Not what I would have expected from Winona!

We know from Betsy-Tacy Go Over the Big Hill that Tib’s Baby Dance is quite difficult, with five different steps and a special Russian kick from a squatting position that sounds like the “prisiadka” from the Nutcracker.

“I like to look out and see it moving.”  After a moment, Mrs. Poppy explained. “You see, I know that it’s moving towards St. Paul, and that it joins the Mississippi  there and keeps on going down to St. Louis and Memphis and New Orleans.

Betsy was surprised to hear that.  Their own river! In which, beyond the town, they fished and bathed in the summer and on which they  skated in the winter. She had never thought of it going traveling.

This made a big impression on Betsy, who is developing an awareness of the Great World outside Deep Valley, as is reflected in Flossie’s story.