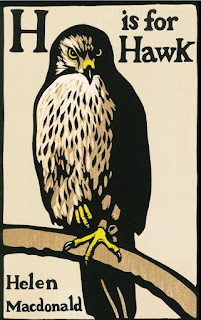 Plot: When Helen Macdonald unexpectedly loses her father, the only way she can endure her grief is to take on the challenge of training a goshawk, using a little known book by the author of The Once and Future King as her guide and retreating from friends and colleagues to an isolated cottage, where she can immerse herself in falconry – and where she becomes as feral as the creature she is trying to tame.
Audience: As this book was a bestseller in England and America, the audience must consist of more than just hawking aficionados. I have no doubt that the striking cover helped attract attention initially but the reviews were fairly rhapsodic.

My Impressions: My friend Maria chose this book for our book group last month. Given that at least three of us had recently lost our fathers, I thought it was timely, and like any history major I had always had an appreciation for a good hawk. However, it was much more raw and miserable than I was expecting. There were really three different stories within the story: 1) Helen’s sense of incredible loss at the unexpected death of her father; 2) Helen’s irrational belief that training a goshawk is the logical way to overcome her terrible grief; and 3) a depiction of author T. H. White, best known for his book, The Once and Future King, which inspired the musical Camelot, who also trained a hawk and (reluctantly) published a memoir about his efforts. Helen is obsessed with White’s book although he was not disciplined enough to follow the rules about hawk training so was doomed to failure; thus, is not a good role model.
Helen admired her father, a photographer capable of infinite patience to get the image he sought, and who was a self-taught historian with quirky interests such as photographing every bridge on the Thames in his spare time. One gets the sense that he encouraged her childhood obsession with hawks while her mother merely put up with it (others in my book group felt she had a bad relationship with her mother, but it could have been that she was just much closer to her father). Her belief that training a goshawk is the only way for her to recover from losing him disrupts her career and friendships as she becomes completely obsessed and anti-social, to say the least. As a child, she had read every book about hawking she could find, including White’s own book, The Goshawk (she describes vividly the upper class British falconers who glorified falconry in their 19th century tomes she absorbed that way other English children read Swallows and Amazons). She also read The Sword in the Stone, which my mother read aloud to me and my sister. I vaguely remember a chapter where Merlin turns Wart into a hawk but it did not make the impression on me that it did on Helen. 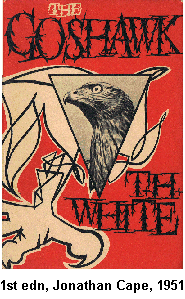 Helen imagines the life of T. H. White, a prep school teacher who is even more lonely and dysfunctional than Helen herself, as he tries to train his own hawk, several generations earlier. These depictions of his life interrupt her own efforts to train her hawk, Mabel. Her description of his isolation and the unhappy obsession with his own goshawk are convincing but not very appealing. I was actually happier not knowing about his horrific parents and how wretched a human being he was. While I found the concept of the book interesting, a couple chapters would have sufficed, as parts seemed repetitive. While Helen conveys that mastering her hawk is what restored her sanity, it also appeared that interacting with her father’s colleagues at his memorial service helped her regain her ability to interact with humans unrelated to hawking.
Source: I got a copy of this book from the Boston Public Library

Thanks for the use of copyrighted images, including the photo of Helen Macdonald from The Independent
Posted by CLM