Which is the scariest Lois Duncan?

My friend Susann has now got me totally hooked on the weekly book review of Jezebel - which this week vividly captures A Gift of Magic, which I think was the first Lois Duncan I read (from, naturally, the John Ward School library) and really is an amazing work. I was torn between laughter and amazement that this reviewer, Lizzie Skurnick, got the book so right. Well, sometimes these Yalies have something to offer the rest of us...

Nearly all of Lois Duncan's books are outstanding, but I think the two most chilling are Daughters of Eve (that guy practically deserved the treatment he got but it was still scary) and They Never Came Home (I think I remember crying at the end). However, the most frightening thing of all is how life imitated art when Lois' own daughter died tragically and mysteriously.

Lois' website mentions that an early book, Hotel for Dogs, is being made into a movie by Dreamworks.
Posted by CLM No comments:

How cute is this baby? 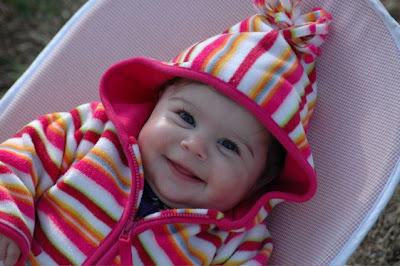 Could my niece be any cuter? I have to admit, however, that while visiting this weekend she did not always smile for her devoted aunt...

Email ThisBlogThis!Share to TwitterShare to FacebookShare to Pinterest
Labels: Katherine

Doesn't this article on literary London make you want to hurry to the airport and jump on the first plane? Although at first I thought she was going to tell me where to buy books, and I must admit I have had no difficulty finding such opportunities on any of my visits. As some of you know, on one trip to England I actually pilgrimaged to Hay-on-Wye, the book town in Wales. I was actually in the beautiful cathedral city of Hereford, right on the Wales border, the day Diana died, and learned of her death watching the BBC in a shabby B&B.
Posted by CLM No comments:

This whining rant from a non sports fan was illuminating: now I know who's been eating my cake!
Posted by CLM No comments:

Email ThisBlogThis!Share to TwitterShare to FacebookShare to Pinterest
Labels: sports fans . . . or not

I enjoy Allesandra Stanley, the NYT's television writer, for remarks such as these:

Pope Benedict XVI’s first official visit to the United States comes closer to Prince Charles’s second wedding, to Camilla Parker Bowles, than his first, the 1981 extravaganza that starred Diana — and not just because both this pontiff and Ms. Parker Bowles, the Duchess of Cornwall, have endured the same tabloid nickname, Rottweiler.

However, the writers who wrote that George "Bush has made his Christianity a central tenet of his life as a politician" should perhaps have written his "alleged" or "selective" Christianity... I certainly don't want anyone to think GB is the role model for Christianity!
Posted by CLM No comments:

Win a day with the World Series trophy!

When the Red Sox won the World Series in 2004, the trophy traveled everywhere (almost like the tradition in the NHL of letting each member of the Stanley Cup championship team having a day with the Stanley Cup over the summer - my friend Dave McNab featured the Cup on his 2007 Christmas card) but I was in NYC and did not get even a glimpse of it. I don't know if it's as pretty as the Stanley Cup (pictured below).

Now there is actually a sweepstakes to win a the World Series trophy for a day! Since my normal commute involves more than I can comfortably carry (laptop, books, tote bags, purse, BlackBerry, etc.) I think this would require a limo...
Posted by CLM No comments:

Madness in the Bronx

When my former boss Dean told me someone had buried a Red Sox jersey in the foundation of the new Yankee Stadium to curse the Yankees, I assumed he was joking, and in any case, was so busy I did not immediately have time to respond or to explain that I was not so gullible as he thought. However, when I had the news on Saturday or Sunday and heard Hank Steinbrenner saying he hoped the (loyal Yankee) construction workers would beat this guy Gino up (he phrased it less politely), I realized yet another bizarre episode in Red Sox-Yankees lore had been added to the lexicon. Even Joe Morgan and Jon Miller seemed vaguely stunned by the whole thing on Sunday Night Baseball. I wished someone would interview David Ortiz to ask what he thought about his jersey being buried.

Is Gino a hero or an idiot? Will the Yankees go after him? Why couldn't he have waited until the construction was complete? That would have been much funnier...
Posted by CLM No comments:

I enjoyed this essay on the Reading Group guides found at the end of the book from last week's NYTBR.

It reminded me of many discussions about said guides over the years, particularly at Avon. Back then, I was the only one in a book group, and I remember explaining to the publisher (an individual with decided ideas and little tolerance for those of others unless they were rock stars he had admired growing up) that whether or not people actually use the guides, they are influenced by their presence when selecting books for their groups. He did not want to copy Ballantine's concept - perhaps admirable but shortsighted. It was not long before everyone was doing it.

I think if the publisher is really trying to grow the author it is likely they will pay for someone to create the questions (which, as seen in the article, may be incredibly obvious or absurd but may be thought provoking) so I was surprised to see that for a while author Julia Spencer-Fleming was somewhat plaintively asking readers on her website if they'd be willing to create one for her! It seemed odd to me that St. Martin's wasn't willing to organize this, and failing that, why couldn't she do it herself? I am a huge fan of her books, and even got distracted while studying for the bar exam when someone at B&N thoughtfully gave me one that was hot off the press. Knowing that JSP is a lawyer herself, I sent her an amusing letter thanking her for giving me a few hours of pleasure during a miserable three months; however, she did not reply, simply added me to her mailing list! Oh well, I am still a fan, and eagerly awaiting I Shall Not Want, coming in June, although I recommend that new readers begin with In the Bleak Midwinter.

Happy Third Birthday to my godson, Nicholas!
Posted by CLM No comments:

Sandra Bullock's in the house!

Everyone at my very proper firm is excited because Sandra Bullock is filming a movie in our building! One of the secretaries chatted with her while waiting for the elevator (the actors have one reserved just for them). The movie is called The Proposal, and Bullock plays a demanding female boss who suddenly faces deportation to Canada. She makes a deal with her young male assistant to agree to a sham engagement and marriage. Sounds a bit like a Harlequin romance! Next week filming will continue in Cape Ann (scene of many a Ruth Holberg book).
Posted by CLM 1 comment:

Speaking as one manager to another, this is what I call a gratifying send-off!
Posted by CLM No comments:

Just another day at the beach

Surely this is the first paragraph of a Minette Walters or John Harvey:

LONDON (Reuters) - Children playing on a Scottish beach discovered a woman's severed head in a plastic bag, police said on Tuesday.
The discovery, along with a hand, was made in the town of Arbroath, Tayside police said. "Officers attended at a stretch of foreshore near to South Street shortly after 10:30 a.m. after the grim discovery was made by children playing on the beach," a statement said.
"They found what appears to be the head of a woman concealed in a plastic bag. A hand has also been recovered from the beach."

No other details were immediately available.
Posted by CLM 1 comment: