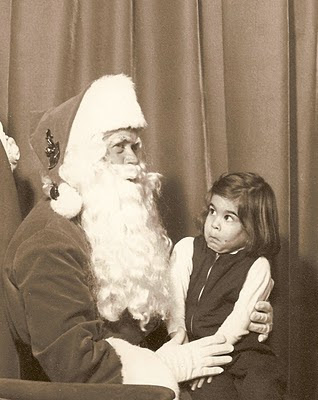 So you better watch out,
you better not cry,
Better not pout,
I'm telling you why:
Santa Claus is comin' to town.
He's making a list and checking it twice,
Gonna find out who's naughty and nice. . .
Posted by CLM 1 comment:

Email ThisBlogThis!Share to TwitterShare to FacebookShare to Pinterest
Labels: Santa

Big test for Harvard at Georgetown today. . .
Posted by CLM No comments:

I began watching the Poldark miniseries on Masterpiece Theatre with my mother, who had read the books, then I quickly got the first in the series from the library. It was originally called The Renegade, but the title was changed to Ross Poldark after the series became an event, first in the UK and then in the US. Like many others, we were glued to our television on Sundays at 9 for weeks. Robin Ellis, who played Ross Poldark, became a sensation and was even called the sexiest man on British Television. Hailed as a British Gone with the Wind, it is one of the best adaptations I ever saw because of the dramatic story line, the fact that it did not deviate too much from the books, and the actors were incredibly well chosen for their parts.

In brief, it is the story of Ross Poldark, coming home to Cornwall from fighting in the War of American Independence, tired and injured. When he returns, he learns that his father is dead, his estates are virtually bankrupt, his fiancee believed him dead and is now engaged to another. Born into a family of good lineage, if not riches, Ross is part of the landed gentry of Cornwall but has a compassion for those less fortunate that constantly gets him in trouble with his peers. It is one such impulse that causes him to rescue an urchin from a group of bullies; when he realizes it is a girl, he agrees to hire her as a servant.
I remember at this moment saying to my mother, "Julian and Tibby!" a reference to Dawn's Early Light, book one in perhaps my all time favorite series, Elswyth Thane's Williamsburg Novels, and she protested, "No!" in horror because she loves those books so much but there are some similarities. Both Julian and Ross fight in the Revolutionary War, and are very much influenced by the ideals of liberty and equality for men: Julian in the years after his arrival in Williamsburg from England in 1774 and Ross upon returning to Cornwall from the Colonies, both men in love with beautiful women from the upper levels of society, both men poor but determined to survive (Ross is much less law abiding than Julian), and both take an initially paternal interest in a teenage girl from impoverished family.
Indeed, I hope I have persuaded you to try the Poldark novels or the DVDs, and I have now convinced myself I need to own and reread the entire series! Other Winston Graham novels were made into movies and are also worth hunting down - notably Marnie (Hitchcock) and The Walking Stick (a compelling but sad book).
Posted by CLM 1 comment:

Several years ago my friend Eileen Kendall, esteemed founder and patroness of the Georgette Heyer Discussion Group, recommended a new miniseries of North and South, based on Elizabeth Gaskell’s novel, which she said was nearly as good as the Firth/Ehle Pride and Prejudice. Although I am fairly well read in 19th century literature, I had somehow never read Gaskell and knew little about her. Handicapped by being in the middle of law school and prescribed by an upbringing that prohibits multimedia prior to one’s having read the book, I mentally put Gaskell aside for several years. Last winter my book group read North and South, which I greatly enjoyed, so when I learned about the Classics Circuit of Gaskell, I was excited to participate and chose Cranford so that I would finally be able to watch the PBS episodes languishing for many months on my DVR.# I read the Oxford University Press edition, because I had liked the introduction in North and South.

Cranford is the story of a quiet English town around 1850, which consists primarily of worthy older ladies living in genteel poverty. As in many comedies of manners, their primary occupation is discussing each other. Cranford itself is viewed through the eyes of Mary Smith, a modest young lady who pays frequent visits to the Misses Jenkyns and who is not even identified by name until late in the book (leading me initially to wonder if Daphne du Maurier’s heroine in Rebecca was not the first nameless protagonist).

At first, I did not see the charm in Cranford, just the bleak existence of its primarily female inhabitants, and I wondered why Mary kept coming to visit the elderly Jenkyns sisters, stern Miss Deborah Jenkyns and her younger and more frivolous sister, Miss Matty.* However, as I continued to read and grow familiar with the cast of characters, I began to appreciate the idiosyncrasies of the Cranford ladies as they balance the demands of their society and its gentle entertainments with their limited financial resources - and ultimately reveal true friendship and loyalty beneath the tittle-tattle. As Mary’s father points out, “See, Mary, how a good innocent life makes friends all round.” While it does not possess the vivid characters and memorable romance of North and South, Cranford also provides unexpected humor to offset the pathos: my favorite is when Miss Matty’s maid, Martha, proposes to her gentleman follower, Jem, who is stunned and says, “[M]arriage nails a man, as one may say. I dare say I shan’t mind it after it’s over.”

Of particular interest to me was that, as with many books of this era, including many I have enjoyed in their Masterpiece Theatre incarnations, Cranford was written as a serialization. Gaskell’s first novel, Mary Barton, had brought her to the attention of Charles Dickens, who encouraged her to become a contributor to his periodical, Household Words. I enjoy imagining subscribers eagerly awaiting the next installment.

Thank you for visiting my blog!
# In fact, this is very timely as PBS will air more Cranford episodes later this month.
* Contemplating the economies of the Jenkyns household, which included a pretense that candles were not necessary, I began to worry again about the demise of my 401K although reading literature is supposed to provide an escape from such concerns!
Posted by CLM 5 comments:

It irritates me that the college basketball media has jumped on the Kentucky bandwagon because John Wall is fun to watch and the team is 10-0, and has completely forgotten that Coach Calipari, charming though he may be, has a habit of leaving universities/teams with recruiting violations while he moves on to the next opportunity. I know he is not alone in this behavior but Kentucky, as one of the elite programs, should not have hired someone with this history. I don't recall anyone criticizing Tubby Smith's ethics before (or after) he was run out of Lexington, Kentucky. . .
Posted by CLM 1 comment:

Home for the Holidays

Kenmore, the Boston subway cat, finds a home. . . Of course, if I had seen this cat roaming in the station, I would have thought it was a large rat like the ones I used to see at the Downtown Crossing Red Line station (the rats are doubtless still there but I now get on at South Station instead).
Posted by CLM No comments:

I have heard that my great-grandmother Lizzy from Danville, Virginia invented the peanut butter and bacon sandwich but I have also read that it was included in early editions of the Joy of Cooking. Regardless, it is a favorite in my family and I wish I had one right now (hint: the bacon must be very well done and crispy but that is true of bacon in general).

Interestingly, there is a resurgence of interest in bacon although some argue it is not healthy! Wiley did a Bacon Cookbook after I left (poor planning, my father would say). NPR has a really delicious looking picture of bacon cookies (I will omit the pecans) on its site today and a story about bacon mania. Yes, I realize those who know my 16th century roots (so to speak) would be more likely to expect I'd be blogging about Francis Bacon! Instead, I just made you hungry.
Posted by CLM No comments: