My brother is passing through Penn Station tonight, which, as you know, is adjacent to Madison Square Garden where the Knicks are playing the Lakers tonight. First he sent me this photo of the Jeremy Lin shirts quickly rushed to the marketplace: 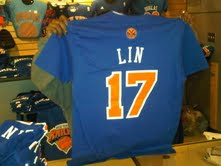 Then he saw people being interviewed on the street, being asked what they think of Jeremy Lin. By megaphone! 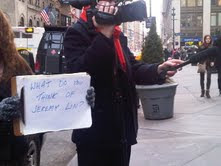 And the Knicks website is offering the opportunity to meet Jeremy (proceeds to charity) with bidding already at $2200! I can't help reflecting that he never charged me to say hello and wish him well, but then he was not a cult figure while at Harvard...

Can Kobe stop the Linsanity? I bet I am not the only person outside NY who would love to see the Lakers lose.

My nephew James' first grade has a tradition for periodic visitors (usually a family member) to come incognito read a picture book to the class. I was thrilled to be invited and spent a lot of time examining books, trying to choose the right one. I read a lot of pirate books but was disappointed in most of those I read, although I had thought that topic would appeal to boys and girls. Finally I narrowed my choice to three: one about a princess, one about a dog going to school, and one I had not read but had heard good things about, Miss Nelson is Missing. I brought them all with me to New York in case the librarian had his own idea about what I should read. Librarians don't always appreciate a know-it-all like me, but the two librarians at this school were very nice (despite the absence of Betsy-Tacy from their shelves, which I rectified). I was told that although Miss Nelson was popular it would be more effective to read a book the children weren't familiar with, so I went with The Princess and the Pig. It is not a typical princess book at all but is humorous and has a quirky ending. I didn't want to run the risk of losing the boys in the audience or shaming my nephew by an uncool choice of book. Thanks to Elizabeth Bird for her review which sent me right to the library. 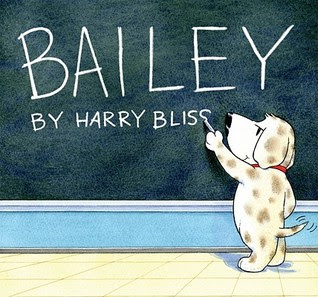 The children arrived in the library at 11 and halfway through their session, they all sat down at tables and put their heads down. I came out of the office where I had been hiding with my sister, sat down and read the first two pages of the book while they listened attentively. Then the librarian asked if anyone recognized the reader. Two hands shot up, only one of which was my nephew. When called upon, still with his eyes covered, he said in a voice of pleased surprise, "It's my aunt!" I was also gratified by two little girls in his class who came up at the end to admire the book.

I liked this bear with his own Dewey Decimal classification that was in the library!
Posted by CLM No comments: