Then and Now, Libraries

I spent the morning doing errands but allowed myself to start at the Brighton Branch Library, part of the BPL where I got my very first library card when I was six! The library is one of the first renovated City of Boston buildings that incorporates the U.S. Green Building Council's LEED (Leadership in Energy & Environmental Design) Commercial Interiors guidelines. I had not been inside since the library reopened in 2010 so was curious.

It is very shiny and new inside - much nicer than it was in the 70s after the first renovation - not only did it look like a prison but they had to stop using their book return slot because vandals enjoyed dropping in lighted matches! The book I was looking for, The Beekeeper's Apprentice, was purportedly on the shelf but could not be located. Luckily, it turned out my sister owns a copy which I borrowed later. However, the booksale yielded a hardcover copy of Madensky Square (yes, I already own at least one copy but I couldn't leave that behind) and a book by Mary Hooper (recommended both by Monica Edinger and my friend Nicky Smith, who sent me the author's At the Sign of the Sugared Plum, which I enjoyed not long ago). I also bought a hardcover copy of Ballet Shoes for a friend's baby.


I first read Betsy Was a Junior from the Brighton Library as it was one of two Betsy-Tacys the Newton system did not own. We loved the Brighton children's librarian, Judy Lieberman, who got great pleasure in challenging me to read books outside my usual genres. Sometimes it worked (The Endless Steppe)(I did not know there was a BT connection until many years later) and sometimes not (The White Mountains).


The original library had huge amounts of character but it was very dark and I mostly remember it was on a steep hill and had narrow steps leading to the front door. Once our car broke down in front of the library - it was too far to walk home so it was fortunate we were in a place we liked to linger until AAA came to rescue us. I was glad to find a photo of the old building hanging in the children's room this morning. I also noticed a new Abbott's Frozen Custard just down the street but resisted temptation as I was on my way to the gym... 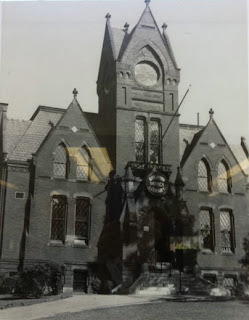 Belatedly I wanted to comment on Brian Jacques, the author of the Redwall series, who died in February. I would not have read his books had I not been working at Berkley, which at that time was one of his publishers. When I learned he was coming to the US to tour for a new book (sometime in 1995, I believe), I read Redwall and the first sequel, and was fortunate enough to have a memorable lunch with him and several of my colleagues. He was very warm and outgoing. Not surprisingly, I was the only one who had read his books, which he appreciated, and we joked about how he had named one of his characters, a badger, Constance, and I said I was glad not to have been a rat. He wrote a nice inscription in the hardcover I had brought with me, asserting that I was more attractive than my badger counterpart. We took him to a fancy steakhouse, Morton’s on Fifth Avenue, where my portion of steak was large enough to have fed my entire family growing up, and we all commented that the huge bowl of spinach was every child’s worst nightmare!

Brian, perhaps guessing that many Americans have a fascination with the British Royal Family, told us that recently he had met Queen Elizabeth when she visited Liverpool, and shaken her hand (I guess people don’t bow much any more!). He then shook hands with all of us, and told us half solemnly, half seriously, “Now you are just once removed from touching the Queen of England!” Anglophile that I am, this gave me a thrill! I hope I still have my autographed book - I have not seen it recently, but there are still a lot of books in boxes.
Posted by CLM 5 comments: