My sister just emailed me to say that Hydrox are coming back! But is this just a temporary tease? And will they taste the same? They were always so much better than Oreos...

Could Kiki, the Blyton parrot, have done any better? Not that any bad guys were captured...

Email ThisBlogThis!Share to TwitterShare to FacebookShare to Pinterest
Labels: lost and found, Parrots

Can you believe this? I can perhaps see charging for the second bag but do they expect us to travel with nothing more than a toothbrush?

American Airlines, the nation’s largest air carrier, said Wednesday that it would begin charging $15 for many passengers to check their first bag, eliminating a free service that passengers in the United States have come to expect during the modern jet era. . .
Posted by CLM No comments:

Only Manny Ramirez would high five a fan while making a catch in Baltimore the other night! I don't find him a bit charming and the media would not have been quite so amused/rueful if he hadn't come up with the ball (it was a dramatic catch).
Posted by CLM No comments:

A woman in the Christian Science Monitor describes a charming little library in an unnamed town that is on the second floor above a fudge shop! I know what she means about loving her old-fashioned library: while I appreciate the convenience of being able to request books online, then go in to pick them a large armful every week or so, I mentioned to my mother recently that as a result I never browse in the library any more. I don't need to, since my books are held for me behind the circulation desk. 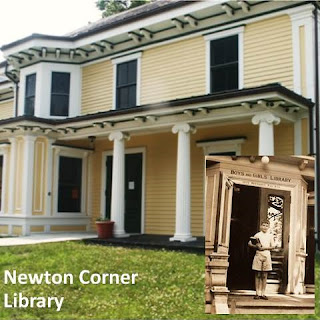 But I have been thinking a lot lately about the library at my elementary school which had a pretty amazing collection of books, including Beany Malone, Noel Streatfeild, Karin Ankarsvaard, Carol Ryrie Brink, Joan Howard, the Mummy Market (which I was reading the day Man walked on the Moon - I was irritated that the teacher kept trying to distract me to watch television), and all the Childhood of Famous American biographies. However, it was the yellow clapboard Boys and Girls Library in Newton Corner where I participated in every summer reading program, and one summer even persuaded the librarians to let me describe every book I'd read to them orally since I was bored filling out the required forms. I don't know whether they thought I was a pain or loved me because I was their best patron (my siblings think the former). Regardless, they would point out the new Margaret K. McElderry books as they came in (I remember in particular eagerly awaiting the new Ruth Arthur) and new books by Barbara Willard. I am not sure I still have my original library card but I recall the number was 18931.
Posted by CLM 2 comments:

The Four-Story Mistake on NPR

I loved Belong to Me, the new book by Marisa de los Santos (but do read the earlier book first, Love Walked In - charming albeit highly improbable) and was very interested to hear on NPR that she is also a fan of the Elizabeth Enright books I like about the Melendy family. There is something very poignant about finding out you share affection for a beloved book with someone else: granted, it is usually someone you are actually acquainted with - or is it?

Think of the online communities of book lovers many of us have come to know, and how we are influenced by them. The Betsy-Tacy listren have definitely enriched my life, and frequently we share both love for childhood favorites as well as suggestions of new books we are reading (and sometimes more than verbal recommendations as Betsy just sent me the new Diana Wynne Jones). I enjoy my Georgette Heyer list too but I could have continued to enjoy Heyer on my own.

Back to Marisa who "dreams of living in a house with a cupola" - what a kindred spirit! If Sarah Jessica Parker really makes a movie of Love Walked In, I think Marisa will get her cupola... When will I get mine?
Posted by CLM No comments:

Which candidate would you want to have a drink with?

The Boston Globe asked which candidate you would want to have a drink with. Of course, that begs the question of whether that is the appropropriate way to choose the leader of the free world. Not to mention the fact that supposedly Bush won that "likeability" vote last time, and look where that got us...
Posted by CLM No comments:

I like this old Russell Baker Column from May 4, 1996, repeated in today's NYT:

Observer: Here's What Mad Is By RUSSELL BAKER

After a consortium of auto, asphalt, oil, trucking, garage-mechanic, traffic-cop, used-car-salesman and median-strip-landscaper lobbies, in collusion with the United States Government, made it impossible to live the good American life without a gasoline-powered car, though preferably two or three to show your patriotism, I gave up and went along.

Now Politicians-in-Chief Clinton and Dole think I'm mad because gasoline prices are rising. They don't know the half of it. They don't even know the twentieth of it.

Sure I'm mad about the price of gasoline, but what I'm really mad about is having to buy the stuff just to go to the grocery.

I'm mad about the grocery having relocated from just around the corner to three miles away in what used to be a cornfield out in the country. And why? Because the grocer needs 15 acres of parking lot to accommodate cars that have to be driven three miles every time you want a bag of grapefruit and a gallon of milk.

I'm mad about physical-fitness cranks always saying, "If you can't even walk six miles to and from the grocery carrying a bag of grapefruit and a gallon of milk, you ought to join a health club and get in shape."

I'm mad about not having a bus or streetcar system left like the one that once enabled people to travel those six miles for a little pocket change.

I'm mad about spending my life looking for a parking space in the city, mad about paying breathtaking sums of money to parking garages, mad about my fellow Americans who dent my car on free-parking lots and drive away without leaving their insurance agent's name.

I'm mad about having to spend more for auto insurance per year than I spend for gasoline.
And how do I feel about knowing that every time I take the car out onto the highway I may be shot because a sniper wants to enjoy a bit of sport with his new gun, or because a testy, armed fellow motorist resents my being in his lane or despises me because my car radio is playing music not to his taste?

How do I feel about that? Mad. That's how I feel.

I'm even madder about being unable, unless you live in one of a few big cities, to travel anywhere anymore without having to drive from 30 to 3,000 miles, all the time burning that increasingly expensive gasoline and inviting snipers and cruising gunmen to shoot you, thus exposing you to hospital or mortuary bills compared with which the price of gasoline is nothing.

I'm mad, too, about people who can't drive being rendered immobile by the national drive-or-else policy.

I'm mad about having to do all the wretched, dull, dreary, miserable driving myself when one of these hopelessly immobilized Americans is the only person accompanying me on a journey of 1,000 miles.

I'm mad about feeling hatred for these immobilized passengers, who are, after all, my fellow human beings and sometimes beloved relatives and should not be detested simply because American culture enables such persons to slumber peaceably in passengers' seats while saps loyal to the auto ethic do all the driving.

I'm mad about the neighbors and their children laughing at me because my car cannot go from 0 to 80 miles an hour in five seconds, and I'm mad about caring enough to be mad about it because it suggests I have fallen in with the loathsome American habit of judging people's character by the car they drive.

I hate being responsible for remembering to change the oil every 3,000 miles, and for checking the belts to make sure they aren't rotting, and for making sure there is enough antifreeze in the radiator, and for knowing how to replace the transmission fluid and how to change a tire when it goes flat at the entrance to the Lincoln Tunnel, and I'm mad about being part of a society that insists on such stuff.

Bill, Bob! Wake up! Why stop at being mad about the price of gas?
Posted by CLM No comments:

A nice Krispy Kreme offer but sadly they have shut their last store in Massachusetts... How I miss those delightful hot out-of-the-oven original glazed! The last time I was in NYC I grabbed one at Penn Station, the last bastion of Krispy Kreme in Manhattan, but it was unusually hard and unappealing. I wish I could get some overnighted to me!

Last week I heard Charles Barkley talking about how much he loves Krispy Kremes! TNT even showed him doing a taste test (I am sure I could equal his performance). Despite the fact that I have an autographed picture of him and me hanging in my home, we do not have a lot in common other than our love of a delicate donut...
Posted by CLM No comments: