It was a thrill on many levels to get home from work tonight to find my first package since moving in less than two weeks ago - and it was the beautiful new edition of Carney's House Party and Winona's Pony Cart by Maud Hart Lovelace with foreword by Melissa Wiley (whose work I have recently got to know and admire). I have not been able to unpack any books in my new home so it seems particularly gratifying to have Carney, one of my very favorites, here with me. Another day I will describe why I like Carney so much but tonight I want to describe how overlooked Winona's Pony Cart has been. It was published in 1953, last of the Betsy-Tacy books and was illustrated by Vera Neville, rather than Lois Lenski, who had illustrated the first four books, and does not appear to have been reprinted as often as the other books, perhaps because Betsy and Tacy are not in the title. 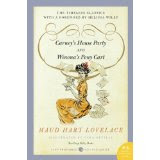 Winona Root is the lively and outspoken friend of Betsy, Tacy and Tib, whose father runs the local newspaper, the Deep Valley Sun. In later books, she is described as being full of the D. Clueless child that I was, I never guessed that D stood for Devil! Here, however, she is a spoiled but irrepressible girl about to celebrate her 8th birthday. Sometimes, instead of introducing children to Betsy-Tacy or Betsy-Tacy and Tib, I start with Winona's Pony Cart because there is something very universal about a child yearning for his or her birthday and party. Every child I have read this book to loved it and seemed to relate to Winona. Winona deeply admires her newspaper father and has been begging for her own printing press, but when this book begins she suddenly decides she wants a pony as well. Alas, her mother thinks she is enough of a tomboy already and discourages her coaxing, trying to distract her with a red party dress instead. Winona is cheered up by the dress but continues to yearn for the pony, joining her friends Betsy, Tacy and Tib in coming up with names for the prospective pony. Will she get the pony she wants?

The other big theme in Winona is who she will invite to her birthday party. Winona does not stick to the well behaved friends whose mothers socialize with Mrs. Root but considers even the most humble members of Deep Valley to be her friends, ranging from the children of her mother's laundress to the Syrian children - so Winona invites them all to her birthday party, ignoring the fact that her mother sent proper invitations to the children she deemed suitable. It is a tribute to the very proper East Coast bred Mrs. Root that she does not reveal her surprise at Winona's varied guest list and, in fact, one of the Syrian boys delights her by bringing baklawa just as the birthday cake is about to give out.
Adults who know Winona from the Betsy-Tacy high school books will enjoy this but it is also very suitable for second and third graders, whether or not they have read Betsy-Tacy. The back matter of this new edition has lots of information about Winona, and I was delighted to read that Mrs. Root was a member of the DAR and that Winona attended Northwestern University. But best of all is a section about illustrator Vera Neville, based on the wonderful research done by Teresa Gibson, whose presentation was one of many high points at the recent Betsy-Tacy conventions, and with help from Vera's niece, Patricia Neville Downe.
Posted by CLM No comments: