Last December people were raving about a cookie from Trader Joe's nicknamed Candy Cane JoJos, which are like Oreos but with crunched up candy canes in the filling. I knew the minute I heard about them that I had to try some, so I hied me to the Trade Joe's in Newton, MA and they were sold out. I tried their Framingham location, and was told pityingly that I should have come closer to Thanksgiving. A kind acquaintance near Philadelphia sent me a box that somehow never reached me but went back to Philly (still packaged but in crumbs - which probably would have been very tasty with ice cream) (I complained to the post office but got no response to my letter, which is typical).

Last week I suddenly remembered I should be on the lookout for these cookies, so after the gym (haha but you know exercise makes one hungry!) I zipped over to Trader Joe's and prudently bought four boxes when I saw them in stock. I gave one box to my mother, hid two on a shelf that is hard to reach, and devoured one myself. They are every bit as delicious as promised!
Posted by CLM No comments:

Last week it was fun to meet Harvard football player, Noah Van Niel, who attended my own high school, Newton North. Ever since John Powers' front page Boston Globe story about Noah's aspirations as an opera singer, he has garnered delighted publicity from writers tired of Ivy League prospects interested in nothing but completing passes and heading for investment banks. Of course, I am now curious to hear him sing, and his mother mentioned that Noah is singing in Cosi Fan Tutte in February and invited me to attend.

The Supreme Court has agreed to hear the gun ban case from the District of Columbia, and Linda Greenhouse points out that this will make gun control a more important issue in the presidential election. I wonder if the politicians who will be most outspoken on this issue really want to be walking around the District if guns there become more prevalent? 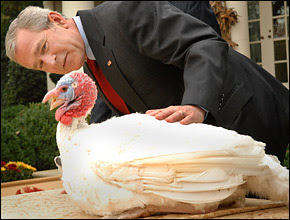 And here is a lovely photo, courtesy of the Washington Post, of our fearless leader discussing Thanksgiving with a close friend...
Posted by CLM No comments:

Neil Diamond has revealed that Caroline Kennedy was the inspiration for this song. He recently performed it for her 50th birthday party. And he says the Red Sox are his favorite team . . .
Posted by CLM No comments:

Which Betsy-Tacy character are you?


Here is the link again.

(I borrowed this from my friend Kate's site)
Posted by CLM 6 comments:

Look at little Katherine with her already devoted auntie! Ah, at 60 hours old, all one needs is some swaddling and a hug or two... (the hugs were in no short supply, as she was greatly admired by everyone in sight, including her two older brothers). 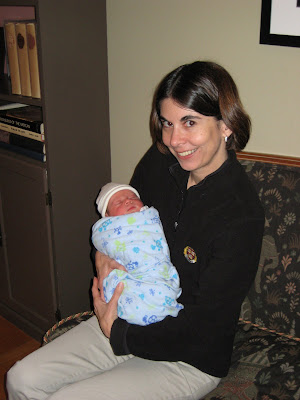