A Fall of Marigolds by Susan Meissner

Title: A Fall of Marigolds
Author: Susan Meissner
Publication: Penguin, trade paper, 2014
Genre: Fiction/Historical Fiction
TBR Challenge: This is the third book I have read from the 2019 Challenge, created by Roof Beam Reader. 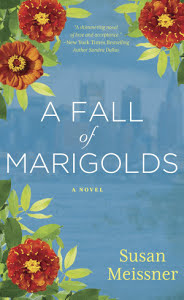 Plot: In this novel, Meissner weaves together two tragedies, nearly 100 years apart yet connected by an unusual scarf of marigold-patterned Indian fabric. Taryn Michaels is a textile expert who lost her husband on 9/11 just as she was about to meet him at Windows on the World to tell him she was pregnant, while Clara Wood is a nurse who, back in 1911, witnessed the horror of the Triangle Shirtwaist Fire. Both women were traumatized by their experience and survived by devoting themselves to their work. Clara takes a job on Ellis Island, nursing immigrants not considered well enough to disembark immediately, and caring for a patient whose deceased wife owned the scarf. Taryn brings up her daughter quietly, while working at a fabric store on the Upper West Side. She tries to forget the events of the terrible day of World Trade Center attacks, including the client who consulted her about a rare scarf. Both women seem to be in a holding pattern, while friends and family want them to move on with their lives.

My Impressions: I am a big fan of books set in dual time lines and, fortunately for me, a number of authors have embraced this sub-genre. In my opinion, the most successful of these writers is Susanna Kearsley but in Secrets of a Charmed Life I was impressed by the way Susan Meissner weaves historical elements into her fiction. Several years ago, at a book signing in Rhode Island, Kearsley mentioned that it is difficult to make the two different time fames (usually one historical and one present day) equally compelling to the reader, which is interesting to contemplate, although the situation in this well-written book by Meissner was somewhat different. Here, I was impatient with both heroines’ prolonged melancholy, despite recognizing each had been through a tragic experience from which it would be hard to recover. And although it echoed my own feelings, I was annoyed by characters, particularly the doctor who works with Clara on Ellis Island, who pushes her to forget the tragedy she experienced, not realizing that recovery does not happen on a set time frame. While this story is meant to convey the possibility of hope and loving again, the overwhelming sense of desolation that permeates most of the book somewhat exhausted this reader. 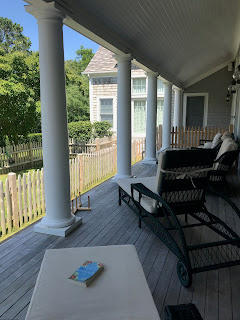 Off the Blog: I am visiting my sister on Cape Cod for a few days, writing from a deck that radiates serenity despite the Marco Polo cries from nearby nephews and nieces.

Windows on the World:  My friend Shelia was asked to speak at a conference at Windows on the World the morning of 9/11 but she declined because of a business trip.  When her trip got canceled, she forgot to tell the organizers she was now available so witnessed the events of that day from her nearby office instead of being there.  We were supposed to meet for a drink that night and she had purchased a box of Scotchmallows for me, which she remembered to snatch as she fled from her office that morning amidst all the horror . . .

Source: Personal copy. Thank you to Ellen Edwards for recommending this author.
Posted by CLM No comments: 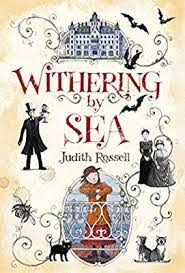 The Travelers by Chris Pavone

Title: The Travelers
Author: Chris Pavone
Publication: Broadway Books, trade paperback, 2017 (2016).
Genre: Suspense
TBR Challenge: This is the second book I have read from my 2019 TBR Pile Challenge, sponsored by Roof Beam Reader. I need to accelerate or I won’t make my goal! 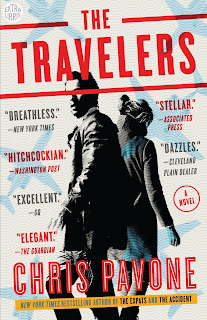 Plot: Will Rhodes is a travel writer for The Travelers, a magazine that sends him all over the world for stories about ex-patriates living in exotic locations. However, like most people in publishing, he and his wife, Chloe, are underpaid and trying to get by. They live in Brooklyn, where they have been trying to fix up a brownstone. After Will is tempted into a one night stand with a beautiful stranger, everything starts to go wrong for him. His secrets come between him and his wife, and between him and his boss. Suddenly, the exotic locations he used to enjoy turn into dangerous places where he doesn’t know if he is the hunter or the hunted. Can Will extract himself from what seems to be an international conspiracy before it destroys him?
My Impressions: This is the third book I have read by Chris Pavone, and falls between the other two in appeal. The Accident, which I read in 2014, was about a mysterious manuscript that could provide fame and fortune – or possibly death – to those seeking to publish it, but I found the characters so unlikeable it was the publishing background that primarily motivated me to finish. The Expats is about Kate Moore, living in Luxembourg as an expat wife who is hiding a secret about her past. She also appears briefly in The Accident. I found her a convincing and entertaining character. Here, the pace is slow and it took me a long time to care much about Will Rhodes, who seemed to me to have asked for all the trouble that comes his way. Fortunately, the book accelerates once Will starts being chased around the world and the second half of the book takes place at quite impressive speed. It wound up being suspenseful and a good summer read.

Off the Blog: I baked delicious banana cake for my mother's birthday!  I wish you could come share the leftovers.

In which Alverstoke makes a move that unnerves Frederica, Jessamy comes to grief in a Pedestrian Curricle, Harry is rusticated, Lady Elizabeth comes to town, and a balloon ascension is planned 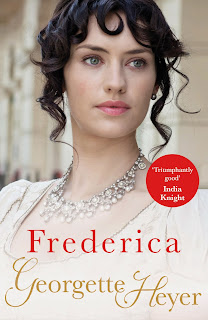 Alverstoke surprises everyone by turning up for what Betsy Ray’s family would call Sunday Night Lunch. He dresses down in morning dress and manages to be the most elegant man in the room without no effort. Felix is delighted to see him and thanks Alverstoke for arranging the trip to the New Mint with Mr. Trevor (although it is doubtless Charles who did the legwork). Darcy Moreton is struck first by Alverstoke’s friendly response to Felix’s greeting and then by Alverstoke’s “warmer and more intimate” smile for Frederica.

The Rest of the Story by Sarah Dessen 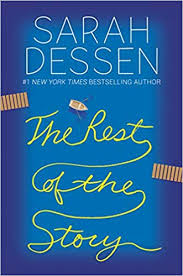 Plot: When Emma Payne’s father remarries, she unexpectedly needs a place to go while he is on his honeymoon. The surprising suggestion is that Emma visit her mother’s mother in working class North Lake, two hours away. Emma’s mother was an addict who overdosed years ago, and Emma has had no contact with her mother’s family since she was 4, although she remembers stories her mother told her as a child. When she arrives, she meets cousins she didn’t know existed and learns her grandmother runs a motel. She also learns that her Calvander family know her as Saylor, which is her middle name. Determined to pull her weight, Emma Saylor is soon changing bedding and scrubbing toilets with her cousins and Roo, the cute son of her mother’s best friend. Cleaning allows time for contemplation about her mother’s sad end; why doesn’t Emma remember more about her childhood visit; the contrast between North Lake and the affluent resort side of town, known as Lake North, which is where Emma’s mother first met her father. Although it takes strategy, Emma finds she fits in on both sides of the lake and, ultimately, has to make a choice regarding where she actually belongs.

My Impressions: A new Sarah Dessen is always a treat, and after a few that were only so-so, I felt this one returned to her usual high standard. Emma is introspective and allows the reader to share her reactions and feelings and, as always, the author makes you care about her. Like many heroines of this genre, Emma is trying to figure out who she is – with the added complication of learning she has two names – Emma, her comfortable suburban self, and Saylor, her can-do summer lake self. Knowing your mother was an addict and died from her addiction would be stressful for anyone and one can’t blame her father for shielding her from that part of her heritage, but it is hard to believe that her paternal relatives living just two hours away gave up on all contact with Emma. Her father didn’t even know Emma’s grandfather had died!

Coming to North Lake brings Emma Saylor close to her rediscovered family, helps her realize all the things she can do – drive, clean (you can tell Sarah Dessen has deep cleaned some rooms in her time – I wish I had those skills!), hold her own against anyone who challenges her, and reclaim memories of her mother. Dessen excels in depicting relationships, and the best part of the book is the way Emma Saylor and her three cousins establish friendships. If there was a flaw, it was that the story is light on romance.   Roo is appealing (except for his name) but very understated. 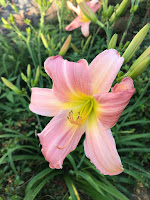 Off the Blog: It is day lily season and I am pleased that the crimson and peach bulbs I planted have finally emerged! Gardening is an uphill battle for me. 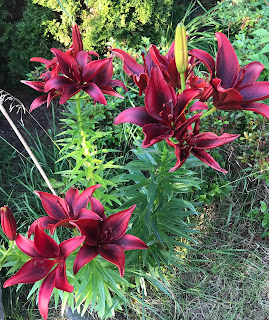 Source: Library copy but I hope to attend a book signing later this month in Falmouth and purchase my own. Not long ago I learned that my father and Sarah Dessen’s father were college classmates, although I doubt they knew each other.  Funny to think she might have turned up at Harvard instead of becoming a Tar Heel!   My elder nieces and I did meet Sarah in 2013 - see photo (proof!).