I thought few people remember Walden’s teen novels these days so I was surprised and pleased when I read last fall on Kristin Cashore’s blog that she had been nominated for the Assembly on Literature for Adolescents’ (“ALAN”) inaugural Amelia Elizabeth Walden Award.

I read every one of Walden’s 40+ books I could find in the 70s and enjoyed them, although admittedly some were very formulaic. They are quite dated now and at times seem sexist because while her message ostensibly is that young women can do anything, her male characters often belittle them and say that until they learn how to be womanly women they cannot truly be successful/know themselves/succeed, etc. Despite this, which annoyed me even as a teen, I liked her books a lot. She wrote several different genres: spy novels, sport themes (of these my favorite is My Sister Mike), drama theme (I enjoyed a trilogy about a young woman named Miranda, although the man she ends up with was one of the most condescending creatures ever, her director/producer), and a few general (Waverly, about a girl who leaves her beloved family ranch to attend the all women's college her deceased mother had loved so much). Her characters love the outdoors and, long before Title IX, enjoyed sports ranging from skiing, basketball, tennis, horseback riding, softball, swimming, field hockey, and scuba diving.
Read more »
Posted by CLM 4 comments:

Devils at the White House

The Duke Blue Devils visited President Obama today to accept his congratulations on being NCAA champions and to show him how to fill out his bracket. . . I was glad to see the president enjoying himself as I am sure that is rare these days.
Posted by CLM No comments:

The Golden Age of Detective Fiction

When I saw the Classics Circuit was doing a tour of the Golden Age of Detective Fiction, I wanted to participate because I am a big fan of the genre. But what to choose? I have read all of Dorothy L. Sayers, Agatha Christie, Ngaio Marsh, Patricia Wentworth, and less prolifically of a few others.

I decided it was time to try Margery Allingham, known for her detective, Albert Campion, one of those sleuths who hide their intelligence behind a deliberately foppish and dimwitted exterior.
Read more »
Posted by CLM 8 comments:

I suspect that most readers’ first reaction to this book is to marvel at the contrast between the beautifully written, descriptive prose and the dark violence of the story within. Author Minrose Gwin depicts a small town in 1963 Mississippi that is full of secrets, and ten year old Florence Forrest, who spends time on both the white and black sides of town, is exposed to most of those secrets, although she is oblivious to many of them. Gwin’s vivid description of the relentless heat of a Mississippi summer almost helps explain the inertia that affects even the decent people in town: those who know about the violence that goes on after dark but ignore it because they don’t want to get involved. I felt every trickle of sweat and scratchy layer of clothing. 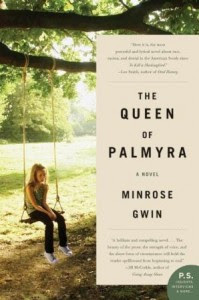 When I heard about this book, I was interested for several reasons: first was that I had heard about but not read The Help, and wondered if it had inspired a subgenre of civil rights era fiction; second was that I had recently heard noted Justice Department attorney, John Doar, speak about some of the lesser known heroes of the civil rights movement, and I wondered how the characters in Millwood, Mississippi would compare; and finally, most of what I know about this era comes from reading nonfiction or juvenile fiction such as The Empty Schoolhouse or Patricia Crosses Town, so I was curious about an adult novel billed as “a nuanced, gripping story of race and identity.” It did not disappoint.

Some of the secrets in Millwood are painfully obvious to an adult reader – that Florence’s father is a member of the Klan and that her mother drives around in the darkness warning local black communities on the nights of the raids; that her grandparents recognized Florence’s father was white trash from the beginning but feel they cannot interfere in a marriage, even to protect their daughter and granddaughter (and perhaps they do not realize how serious the danger is); and that something dreadful is going to happen, not just to Medgar Evers but to the innocent newcomer, Zenie’s niece, Eva Greene.

Eva tells a shopkeeper on the black side of town that change is coming: “Maybe not today, maybe not tomorrow, but a change going to come. Look at Harmony, over in Leake County. They brought in Medgar Evars and the NAACP and the Justice Department people, and they’re finally starting to get registered.” I am proud that my father, Gordon A. Martin, Jr., was one of those Justice Department lawyers, working for Robert Kennedy and John Doar, assisting courageous men and women in Hattiesburg, Mississippi prepare testimony in pursuit of their right to vote. My father tells their story in Count Them One By One: Black Mississippians Fighting for the Right to Vote (coming next fall from the University Press of Mississippi), the story of the United States v. Theron Lynd, an important civil rights trial in Mississippi which led to the passage of the Voting Rights Act of 1965 - which my father calls the greatest civil rights legislation since the Reconstruction. Like fictional Eva, these real and very brave witnesses risked their lives for a cause they believed in more than personal safety.

One of my greatest fears, as I read Queen of Palmyra late at night, was that no one would step up to protect Florence from her increasingly violent father, although I was unsure whether he would kill her or rape her. One of my favorite parts of the book was when a character I had dismissed as weak and willfully blind mustered her wits to protect Florence. In the novel’s greatest irony, it is Zenie, her grandmother’s maid, who realizes Florence is being physically abused by her father, although Zenie is unable to protect her own niece from that same individual and Florence's own family has ignored her struggles.

Is this a novel of hope or of shame? Is Eva Greene, the catalyst of the violent events of the summer, or would they have occurred anyway? I don’t want to spoil the story for those who haven’t read it so I will leave these questions for the moment, and instead recommend the book highly for those interested in a novel that is painful yet irresistible. I think it is a perfect book group selection as there are so many issues to discuss.

This review is part of the TLC Book Tour. Thank you to HarperCollins (publisher of the beloved Betsy-Tacy books) for providing me with a copy of this book (although I wish it had come with a slice of Florence's mother's lemon cake with divinity icing!). I look forward to more from this author.
Posted by CLM 2 comments:

Email ThisBlogThis!Share to TwitterShare to FacebookShare to Pinterest
Labels: Civil Rights, Count Them One by One, Gordon A. Martin, Jr., Minrose Gwin, Mississippi, Queen of Palmyra

Going to the Great Library in the Sky

Two obituaries caught my eye this morning as I read my Boston Globe on the way to work because both women's love of books was highlighted:

Joanna Griscom spent years volunteering at the Cary Memorial Library in Lexington, MA (where my former author Cynthia Johnson is a librarian - I keep meaning to call her) among other activities. The library director was quoted in the article, describing Ms. Griscom as unsung hero for her work on the board of the library foundation.

Another obituary, for Candy Jenkins, a historical preservation professional and Smith alumna, stated that she was "[a] voracious reader. . . [she] had three library cards, for Belmont, a statewide network, and libraries on Cape Cod." Books "came in and out of [her home] in wheelbarrows."

It is comforting that the friends and family whose memories inspired these obituaries recognized how important books were to these women. I hope when it's my turn people can describe my books without mentioning messy piles on the floor (perhaps by then they will be shelved with beautiful Dewey Decimal precision).
Posted by CLM 1 comment:

In case you haven't see this funny Youtube video on the Brontë Sisters. . . (my computer does not want to cooperate with the umlaut but will allow me to cut and paste it)

For information on the Brontës and related Society, there is a comprehensive website.

If you are not in a Gothic mood, I also recommend The Return of the Twelves, a novel about the wooden soldiers given to Branwell Brontë, which he and his sisters Charlotte, Emily, and Anne played with and wrote stories about the kingdoms of Angria and Gondal.
Posted by CLM 4 comments:

Tonight I attended the 40th Anniversary celebration of David Godine Publishing, and David read a quote from historian Barbara Tuchman I really liked:

"Books are the carriers of civilization. Without books, history is silent, literature dumb, science crippled, thought and speculation at a standstill."

I have always been a big fan of Barbara Tuchman, who like me, majored in History and Literature at Radcliffe. Now I see she may have cribbed this quote from Henry David Thoreau, which is not proper historian behavior (although it is not unknown historian behavior)! Perhaps the quote was simply wrongly attributed to her.

"Books are the carriers of civilization. Without books, history is silent, literature dumb, science crippled, thought and speculation at a standstill. I think that there is nothing, not even crime, more opposed to poetry, to philosophy, ay, to life itself than this incessant business." Thoreau
(1817 - 1862)

Seriously, is anyone going to say her Kindle is a carrier of civilization?
Posted by CLM 1 comment:

Susanna Kearsley is such a gifted writer I cannot figure out why her books are not better known. I sometimes wonder if it is because she is Canadian and there has been no major publicity machine behind her (as Alex Beam noted in the Globe today, although there are talented Canadian authors their bookstore bestsellers are all US imports). Like Mary Stewart (although perhaps without her warm humor), Kearsley creates a vivid sense of place and as Stewart did in Touch Not the Cat, she moves effortlessly from present to past, telling each story so compellingly that the reader forgets there is any other.

The Winter Sea is Kearsley’s best book since Mariana. The contemporary story is told in the first person by Carrie McClelland, a writer of historical fiction, trying to figure out how to approach her current topic, early 18th century Jacobite uprisings in Scotland and those behind the plots to restore the Old Pretender to his rightful throne. When Carrie visits her agent in Scotland, she accidentally (but we know there are no accidents in fiction!) finds her way to a ruined castle, Slains, and begins to experience vivid dreams that inspire her novel. Carrie’s visions or memories are of a distant ancestor, a quiet young woman, Sophia Paterson, an orphan who is taken into the household of the Mistress of Slains Castle, the Countess of Erroll, and becomes involved in the Scots’ plotting through the kind relatives who have given her a home. Sophia is recovering from family tragedy and remains somewhat emotionally detached from the intrigue until she falls in love with a man who has dedicated his life to the Jacobite cause. She is a fascinating character (more interesting, in fact, than her creator, Carrie).
Read more »
Posted by CLM 1 comment: