The House of Windjammer (Book Review)

Plot: 17th Century Holland: the Windjammer family has been a prominent part of the Dutch community for generations and its shipping fleet is heavily invested in trade to the New World. When the shipwreck of four laden galleons causes financial disaster, 15-year-old Adam becomes the heir to the House of Windjammer with the overwhelming responsibility of saving the family fortune and reputation. He is hindered by his father’s enemy, the evil banker Hugo van Helsen, whose lovely daughter Jade may also be Adam’s enemy – or his only trusted ally in a city of treachery, danger and despair. 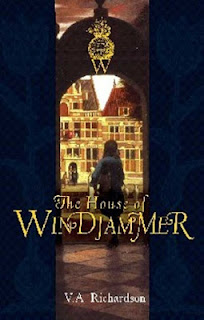 What I liked: I don’t object to books where the main character is a boy but Jade van Helsen is a more interesting character than Adam. Although the reader (perhaps more knowledgeable about these situations than Adam) wants to trust her, she has her own agenda and it is not completely clear if she is helping Adam because she likes him and recognizes her father’s villainy or whether she has her own agenda.

Holland is an unusual and interesting setting for historical fiction. Not long ago I found one of my mother’s childhood favorites, None but the Brave, which I recommend. I liked that the background of this story includes the theme of tulip madness, as Holland suddenly realizes the export potential of tulips. Our friends at Wikipedia say that "[b]y 1636 the tulip bulb became the fourth leading export product of the Netherlands—after gin, herring and cheese. The price of tulips skyrocketed because of speculation in tulip futures among people who never saw the bulbs. Many men made and lost fortunes overnight, to the consternation of Calvinist elites who abhorred this artificial frenzy that denied the virtues of moderation, discretion and genuine work."

What I disliked: For plot purposes, I can see why everyone in the book treats Adam as a child but surely a boy of 15 in 1636 would have already been working with his father in the family business even if he had difficulty persuading older and wiser members of the business community to trust his judgment and/or maintain loyalty to the Windjammer.

Source: Unusually for me, I had not heard or read about this book, but when I came across it in a pile of books I was intrigued by the cover and bought it on the spot. I will certainly read more in this series and will share with my eldest nephew.

You may not be surprised to hear I own four copies of Anne of Green Gables. One, my original copy and favorite, is missing – I think it is a mustard-colored Grosset & Dunlap paperback with Anne past her ugly duckling phase, in a sort of photographic cover, wearing an organdy white dress and with smooth auburn tresses.  Does anyone know that one?  I gave away an ugly Scholastic paperback and an unattractive (albeit useful) anthology of books 1-3 or I would have six.

The brilliant Stephanie Lucianovic of the Grub Report recently listed what she considered Top Ten Most Romantic Betsy Ray-Joe Willard Moments, and someone asserted that it would be hard to come up with a similar list for Anne Shirley and Gilbert Blythe. I disagree:

1. The Slate Incident and Apology

Gilbert was a “tall boy with curly brown hair, roguish hazel eyes and a mouth twisted into a teasing smile.” He notices Anne right away and winks at her. That same day she is staring out the window when he tries to get her attention by grabbing her braid and calling her, “Carrots!” As everyone knows, she hits him over the head with her slate but is more upset by the wretched teacher humiliating her before the class (and spelling her name without an E) multiple times that day. Gilbert apologizes immediately but Anne refuses to speak to him or forgive him.

2. Bingen on the Rhine

Both Lucy Maud Montgomery and Laura Ingalls Wilder do a great job at conveying the events that entertained their heroines. When Diana Barry invites Anne to attend an Avonlea Debating Club concert, she is thrilled at the invitation to spend the night in the Barrys’ spare-room. The reader enjoys Anne’s appreciation of the entire evening but thrills (as does Diana) to Gilbert’s recitation from Bingen on the Rhine, “There’s another, not a sister…”

Also in AOGG, Anne and her friends are acting out Tennyson’s Idylls of the King, and Anne, as Elaine, the Lily Maid, floats down the pond in a leaky boat and is rescued by Gilbert. Gilbert, two years older than Anne and more mature, takes advantage of her being forced to speak to him and apologizes again for his conduct from two years earlier: “[L]ook here. Can’t we be good friends? I’m awfully sorry I made fun of your hair that time. Besides, it’s so long ago. I think your hair is awfully pretty now – honest, I do. Let’s be friends.” Anne hesitates but then spurns his friendship, although she is “conscious of an odd feeling of regret.”

When Anne and Gilbert both join the class studying for admission to Queen’s (to become teachers), their rivalry in the classroom becomes intense and everyone knows it. Even Diana, who has always had a soft spot for Gilbert knows that for Anne “success would be incomplete and bitter if she did not come out ahead of Gilbert Blythe.” They tie in the exam, but Anne’s name is the one listed first in the newspaper!

5. At the White Sands Hotel

Anne unexpectedly has stage fright when she is supposed to recite The Maiden’s Vow at a concert at the White Sands Hotel. She sees Gilbert smiling and misinterprets it as taunting whereas he is really admiring her. Regardless, that is all the motivation she needs to perform well.

After Anne gives up her scholarship to Redmond to stay home with Marilla and teach school, Gilbert turns down the Avonlea school position so that Anne can teach there and be closer to home. She is still not speaking to him but when she runs into him, he politely lifts his cap. Anne, flushing, thanks him and admits she is sorry she did not accept his previous apology. Gilbert says jubilantly, “We were born to be the best of friends, Anne. You’ve thwarted destiny long enough.” Indeed!

7. Anne of Avonlea has too much about Dora and Davy (both very tedious characters). It’s obvious to everyone that Gilbert is smitten while Anne, starved of friendship as a child, merely thinks of him as a good chum. There is one scene at the Dryad’s Bubble where she acknowledges to herself that he is handsome, although not her ideal man. Gilbert, however, has made up his mind to be “worthy of Anne’s friendship and perhaps some distant day her love.…” But he had “already too good reason to know that Anne would mercilessly and frostily nip all attempts at sentiment in the bud – or laugh at him, which was ten times worse.”

There are two hints that Gilbert is The One: the first is when Diana gets engaged and when Anne contemplates her own house of dreams, she can’t shake the image of Gilbert being there with her. Then, after Miss Lavender’s wedding, Gilbert talks about the ideal of a couple “going hand in hand all the way through life” without misunderstanding, and for the first time Anne’s heart flutters and it occurs to her that “love [might] unfold[] naturally out of a beautiful friendship, as a golden-hearted rose slipping from its green sheath.” Gilbert wisely says nothing more, biding his time.

Anne of the Island

The descriptions of college fun and housekeeping in Anne of the Island are rudely interrupted by Gilbert’s proposal and Anne’s rejection. When Anne (unable to forestall his declaration) tells him she does not love him, his face becomes white to the lips and he gives a bitter little laugh. “Friends! Your friendship can’t satisfy me, Anne. I want your love – and you tell me I can never have that.” He leaves and Anne “felt as if something incalculably precious had gone out of her life. It was Gilbert’s friendship, of course. Oh, why must she lose it in this fashion?” I read this book repeatedly and found this scene agonizing every time.

Anne snubs everyone who tries to take Gilbert’s place until the most memorable umbrella scene in history – when Roy Gardner appears and shelters Anne with his. Yet she carries Gilbert’s flowers at Redmond graduation even before she recognizes that Roy is wrong for her*and turns down his proposal. Back in Avonlea that summer, she learns that Gilbert has typhoid fever#:

There is a book of Revelation in everyone’s life, as there is in the Bible. Anne read hers that bitter night, as she kept her agonized vigil through the hours of storm and darkness. She loved Gilbert – had always loved him. She knew that now. She knew that she could no more cast him out of her life without agony than she could have cut off her right hand and cast it from her. And the knowledge had come too late – too late even for the bitter solace of being with him at the last. If she had not been so blind, so foolish – she would have had the right to go to him now. But he would never know that she loved him – he would go away from this life thinking that she did not care.

How I suffered with Anne when she thought Gilbert was dying! I thought Gilbert’s illness went on for a whole chapter but really LMM only keeps us in suspense for two pages.

Luckily, Anne’s friend Phil wrote to Gilbert to tell him Anne had turned down Roy, so he was able to accelerate his recovery, then he invites Anne to visit Hester Gray’s Garden where –with more confidence – he proposes again:

“I have a dream,” he said slowly. “I persist in dreaming it, although it has often seemed to me that it could never come true. I dream of a home with a hearth-fire in it, a cat and dog, the footsteps of friends – and you!”

Anne wanted to speak but she could find no words. Happiness was breaking over her like a wave. It almost frightened her.

“I asked you a question over two years ago, Anne. If I ask it again today, will you give me a different answer?”

Still Anne could not speak. But she lifted her eyes, shining with all the love-rapture of countless generations, and looked into his for a moment. He wanted no other answer.

Gilbert has a few poignant moments in Anne’s House of Dreams particularly when Anne loses the baby(none I recall after that – he is too tired by then) but nothing to dislodge these top ten moments.

* One can only imagine how horrified Roy’s preppy family was by his infatuation with a penniless orphan, regardless of her charm. Think how nasty Mitchum Huntzberger was to Rory Gilmore, yet although illegitimate, she was likely to inherit her grandparents’ money.

# Why would Gilbert get typhoid fever from studying too much? It’s a bacterial disease! Of course, I did not know this at 12. Was there a misdiagnosis? Did Dr. Clarkson do his residency on Prince Edward Island?