How I Met Ray Bradbury

Back in May 1995, I was working for Avon Books (since purchased by the News Corporation and now part of Harper Collins) which was in the midst of launching a hardcover imprint with many noteworthy authors.  That year the annual booksellers’ convention was in Chicago and it was a fun few days meeting authors and booksellers from all over the country.  I also managed to attend the Bulls NBA Championship game, thanks to my brother-in-law.  Another evening Avon senior management (and I) took author Susan Elizabeth Phillips out to dinner at a fabulous Italian restaurant.   This was fun for me because I had read all her books and had been a big fan since Jennifer Enderlin gave me the manuscript of It Had to be You, the first in the Chicago Stars series (when she and I were both at NAL).  Susan was and is delightful.

The next night Ray Bradbury, who died earlier this month, was our guest of honor. For some reason, it was suggested that I as the sales manager for Barnes & Noble and Waldenbooks should sit next to this illustrious author. Although editors often relied on me, as an enthusiastic reader, not to let them down with authors, I am embarrassed to admit that I had never read any Ray Bradbury. I tried to explain this to my boss discreetly (not to mention that anyone in the group would have been honored to sit with Ray) but she was not someone who ever lost an argument. “Just don’t stop talking,” Debby admonished me, “I don’t want to see any awkward silences. Tell him what we are doing to sell his books.”

Ray was warm and very entertaining. He told us a couple stories, including one about a convention where an avid fan made so many trips back to his car for memorabilia for Ray to sign that other attendees were lingering just to see what this man had amassed over the years. He told us about his lifelong obsession with magicians. He also asked us lots of questions about the evolving book business. I took my instructions seriously and talked nonstop during dinner. Whenever I paused for a mouthful of food or something to drink, I could see my boss glaring at me from across the table. It was unclear if she objected to the topics or my occasional need for sustenance but I soldiered on until at last the nearly four hour dinner was over (I ate well at that job and it was a talkative group so meals were never speedy). As we made our adieus I (hoarse from my efforts) told Ray what an honor it had been to meet him and he twinkled at me and said, “Next time sit on the side with my good ear. I’m afraid I couldn’t really hear a word you said!”


Several years later, I saw that Ray had written a book for Morrow called Let’s All Kill Constance.  Startled, I asked his editor for a copy but there was no hidden message although Constance is running in fear from something she dares not acknowledge….  I wish I had met him again to get it autographed but it has a nice place of honor on my shelves next to Tolkien! 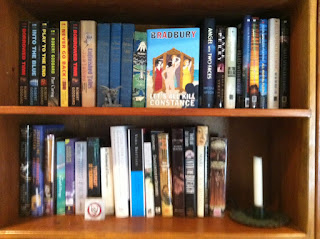