The Hobey Baker Award is the Heisman for college hockey, and Alex is my father's favorite Harvard player. You can vote for him (or your own favorite) here.
Posted by CLM No comments:

All Roads Lead to Betsy-Tacy

Meg Cabot is showing some love for Betsy-Tacy on her blog:

"Did you know HarperCollins/Avon is re-issuing the Betsy/Tacy books? I’m writing a forward to one of them! Yay! I love Betsy!"

Rumor has it Meg Cabot will be coming to the Betsy-Tacy convention in July! I wish I could bring my nieces - Alexa loves Allie Finkle so much!
Posted by CLM No comments:

Here is an article from the London Times with a top 25 boarding school stories - most of which I agree with (a few I have not read!):

5) The Autumn Term, Cricket Term and Attic Term by Antonia ForestForest wrote only 13 novels, all but one connected with the Marlow family. Ten of them were about the Marlow children, beginning with the Autumn Term (written in 1948) and were fabulous tales of the six girls and two boys. They deserve to be better-known. I particularly remember Nicola and Lawrie, the two youngest sisters, who didn't quite live up to the standards of their hugely successful older sisters at Kingscote, the family boarding school.Autumn Term, and its sequels, The Cricket Term and the Attic Term and were funny, beautifully written, and seemed far more realistic than many of the other boarding schools books around (especially when it came to the relationship between all the sisters).
Posted by CLM No comments:

It is somewhat funny to read that Obama's new White House staff are being told they can't have personal email accounts on their classified computers - no Facebook!

Less amusing was hearing allegations that the Clinton staffers removed the Ws from their computers before leaving eight years. Hey, those are my tax dollars!

This is more amusing: "The Bush daughters showed Sasha and Malia Obama around [the White House]," [comedian Mark] Russell joked. "Barbara showed them where all the bedrooms were, and Jenna showed them how to make a fake ID."
Posted by CLM No comments: 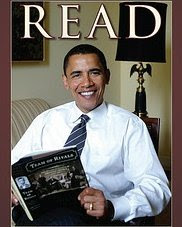 As my Latin teacher, Miss Cox, used to say, "Nihil novi sub sole," - there is nothing new under the sun, and this interactive from the New York Times measures all the buzz words used since George Washington's first inaugural address.

The publishing industry is in terrible shape, and several of my friends at B&N.com were laid off last week. Can we take hope from the fact that Obama is a big reader? Will he be able to do anything to promote literacy and book purchasing, whether by individuals or by libraries?

Michiko Kukatani writes that "Mr. Obama’s first book, “Dreams From My Father” (which surely stands as the most evocative, lyrical and candid autobiography written by a future president), suggests that throughout his life he has turned to books as a way of acquiring insights and information from others — as a means of breaking out of the bubble of self-hood and, more recently, the bubble of power and fame."

However, it isn't enough for Obama to be a much needed literary president and for adult readers influenced by Obama rush out to buy books about Lincoln. I wish he would share the books Malia and Sasha are reading so that parents buy these books for their children (although the books need to be read, too).

The Boston Herald offers a list of must-see presidential movies. Embarrassingly, I have only seen one of them! Maybe it is time to join Netflix!
Posted by CLM No comments:

No one needs to worry that Tommy Amaker isn't realistic about Harvard's stunning win over BC; however, this is one aphorism I certainly never heard before!

I hope he did get to savor the win before he headed back out to recruit. At least, the team is now on exam break which gives the coaches a chance to catch their breath.
Posted by CLM 1 comment:

Why ARE women their own worst enemies at work? Lisa Rasmussen, where are you? At least, most of my crazy female bosses were equal opportunity abusers . . .
Posted by CLM No comments:

Email ThisBlogThis!Share to TwitterShare to FacebookShare to Pinterest
Labels: women in the workplace

I am a big Hillary fan but dialogue like this is somewhat silly:

"You have been such a leader," Clinton replied.

"I couldn't have asked for a better answer," Boxer returned.
Posted by CLM No comments:

I just finished Hunger Games, a very disturbing futuristic YA novel in which heroine Katniss takes her little sister's place in a deadly tribute required by the government. 24 teenagers are set up in a deadly game of survival with the whole nation watching to see which one will kill/outlive his or her peers. The concept revolted me but once I started reading I could not stop, and I thought for the most part it was extremely well done and creative. I was a bit irritated to find out at the end that it is book one in a series - that seemed to trivialize the conclusion.

Certainly the author is influenced by Theseus and the Minotaur. However, this interviewer is perhaps a little too awestruck:

You can spot the lineage of Collins’s own influences throughout the novel, from Betty Smith and Carson McCullers to George Orwell and Madeleine L’Engle. Because of Collins’s cinematic attention to detail of the games and the world of Panem, you may find yourself feeling disconnected at times from its human center. But, the philosophic conventions are wildly complex and simple, ranging from “Lord of the Flies” to “The Running Man.” And when the narrative center holds, the striking figure of 16 year-old Katniss Everdeen stands stall, giving the novel a sincere and realistic heart. Even while fighting for her life, she is also faced with one of the toughest decisions any girl will have to make – choosing the right boy to love.
Posted by CLM 1 comment:

"Patent lawyers had only lately ascended to the aristocracy of the American bar. Trained not just as lawyers but as scientists or engineers, and working in small, specialized firms, they were at one time rudely dismissed by corporate lawyers as gearheads in green eyeshades, not good enough at science to be scientists, nor sufficiently talented at law to be real lawyers. Then came the intellectual property revolution of the 1990s, and these onetime outcasts found themselves ruling the last vibrant corner of the American economy."

from A Patent Lie by Stanford professor Paul Goldstein

Note: their ascendency did not make them any more likeable!
Posted by CLM No comments:

The Harvard basketball team had a huge upset win over Boston College tonight, and while even Harvard alumnus Mike Lynch was joking on WCVB that no one would be able to be able to guess who'd had the big win, it is a great win for our program. Admittedly, BC may have been letdown or tired after having beaten UNC in Chapel Hill on Sunday but that could easily have caused them to come out with excess energy and confidence.

The really annoying thing is that all the media in Chestnut Hill covering the firing of the BC football coach only yards away had all left before the basketball game began! I won't tell you the other incredibly annoying thing.
Posted by CLM No comments:

Email ThisBlogThis!Share to TwitterShare to FacebookShare to Pinterest
Labels: ACC, BC, Harvard basketball

Although I am still watching Grey's Anatomy, it is no longer must see Thursday television but rather something that one records then watches weeks later. The implausibility of these doctors' behavior is increasingly annoying - specifically, they have all done something for which they should be fired, lose their license to practice medicine, or be kept far, far away from patients. Moreover, Izzie sleeping with dead Denny is just ridiculous, but I assume it is because show creator Shonda became obsessed with the actor and can't come up with another vehicle for him. I wish she would put her talent to use making Derek less annoying, as he does nothing but whine like all the other characters (both onscreen and off). She can't be reading the reviews of fans and critics, or she would come up with a better plot. 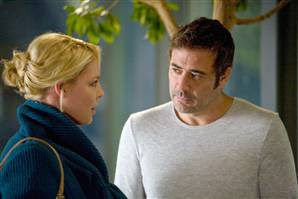 Lexie and Sloan - Lexie has become my favorite character, and since she had absolutely no chemistry with George, and Alex is back with Izzie, it made sense for her to become involved with Sloan. I'd think there was more potential for him to reform if he hadn't been sleeping with cow-like Callie an episode ago. . . And Meredith doesn't have to be her best friend or pretend she cares about her sister but it's not as if Lexie ever did anything to her (and what happened to their crazy father?). Meredith's request that Derek warn Mark away from Lexie was the first sisterly thing she's ever done. It was Derek who brought Lexie home after Sadie's appendix was removed.

Owen Hunt - it was about time someone new turned up on this show and he showed potential at first but now he just seems annoyed all the time (not that he doesn't have reason - he walked into Seattle Grace Junior High School, just when he needed to escape from stressful Iraq - which reminds me of the guy at my law firm who volunteered for active duty just to get away from being a downtrodden associate), which is not much of a part. Surely he is supposed to smoulder?

Save this show!
Posted by CLM No comments:

I like the idea of Malia and Sasha having pillow fights in the Presidential Suite of the Hay-Adams hotel in DC!
Posted by CLM No comments: