Back in the 60s my great aunt Justine had a temp job at Nestle's headquarters in White Plains, NY where they gave her a slender chocolate cookbook with wiro binding as a thank you.  Because she did not cook, she gave it to my mother who tried the recipe for Heavenly Chocolate Pie, which became a Christmas Day favorite in our house.  This morning was my first time making it and it turned out beautifully: 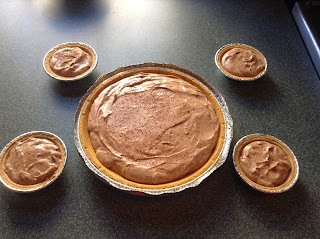 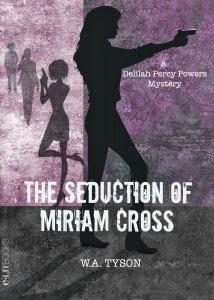 Plot: Delilah Percy Powers is a private investigator heading an all-female agency.  A former client asks Delilah to investigate the mysterious murder of her aunt, Miriam Cross, a bestselling author.  Miriam had cared enough about her battered niece to offer her a home and financial support, and was also a committed human rights activist, but had no known enemies and the police have abandoned their inquiry into her death.  Delilah decides to add a computer forensics expert to her staff, Matthew Anderson, to help analyze Miriam’s background and online presence for clues and is slightly distracted from her investigation by “Anders'” intensity and charm.   Drawn into a web of lies, secrets and sexual obsession, the agency gets close to the truth behind Miriam’s death but in so doing the women find themselves in great danger. . .

What I liked: This is an unusual mystery with quirky and amusing characters.  Delilah and her unusual staff are determined to solve the secret of Miriam’s death regardless of personal danger (perhaps they should be also little more mindful of the client’s safety as they carry out their investigation – I am not sure I would hire them!) and the reader is definitely curious about future Percy Powers cases.  I also enjoyed the Philadelphia setting.

What I disliked:  Delilah has never recovered from the death of her father when she was 12 or the loss of her fiancé, whose body was never recovered from a kayaking accident.  Her melancholy casts a shade over the book but it is no excuse for her short fuse and rudeness to pretty much everyone with whom she comes into contact.  She is not a likeable heroine, although the feisty women who work for her are appealing in their different ways.  It is not totally clear to me why Miriam hid from her pursuers instead of turning them in to the authorities, although I suppose it was related to her sexual obsessions, which I found tedious.

Source:  Overall, this was a fun read.  I received the book from TLC Book Tours and you can visit other stops on the tour listed below.   TLC is providing a copy for me to give away - please leave a comment if you'd like it!  If there's more than one request, I will do a lottery.

Last spring I was captivated by a three-part series from the UK called Bletchley Circle.  I assumed it would be about the brilliant men and women who worked secretly at Bletchley Park during WWII to decipher intercepted German radio broadcasts and turn the deciphered messages into intelligence reports.  Winston Churchill referred to these individuals, led by brilliant mathematician Alan Turing, as "the geese that laid the golden eggs and never cackled."  In 1941, when the top Codebreakers wrote to him that they were starved of resources to do their essential work, Churchill ordered, "Action this day!  Make sure they have all they want on extreme priority and report to me that this has been done."

However, Bletchley Circle was different from the “women in war” theme I was expecting and enjoy.  It did start out showing four women working at Bletchley – Susan, an inspired puzzle solver; Lucy, who has a photographic memory; Millie, gifted at languages and strategy; and Jean, who appeared to be their boss during the war and seemed to know where to go to get information at all times – then jumped to seven years after the war.  The women have lost touch and Susan has married (Tim, who does not know of his wife’s past as a code breaker because she and many others had signed the Official Secrets Act and can’t tell anyone – it is amazing how these people respected their pledge) and is raising two children, dealing with post-war rations.   Slightly acquainted with a woman who was murdered, Susan starts following newspaper reports of her death which turns into coverage of a serial killer.  Susan notices a pattern which she thinks the police have missed and insists on bringing her concerns to Scotland Yard.   The detective is polite at first but can’t find anything to back up her theories so sends her home.   Frustrated but convinced she is right, Susan hunts up her old friends and convinces them to help her investigate the killer.  They are reluctant, and in Millie’s case, a bit hurt that Susan gave up their plan to travel the world to marry and settle down, but soon they also believe it is their duty to catch the killer to prevent additional deaths.   However, while the police scoff at them, the killer becomes aware of their efforts and recognizes in Susan an intricate mind worthy of his respect.   In one chilling scene, after Susan’s husband, Tim, has suggested she do crossword puzzles rather than worry about silly old murders, Tim picks up the newspaper and said, “Look, you managed to get all of this one done quickly!”  Susan looks at the nearly completed crossword on her breakfast table and realizes the killer was in her home and that she has put her family into grave danger.

As with Homefront, one of my all-time favorite TV shows, this series shows the displacement certain women who had made significant contributions to WWII experienced afterwards, here relegated to housework and childrearing (Susan – which would be fine if she weren’t so bored by it), waitressing (Millie, despite all her language skills), ironing (Lucy, who also gets beaten by her husband).  Only Jean seems to have established a career, working as a librarian.   Perhaps it is implausible that the women could have obtained the information that enables them to solve the mystery (as I said to my sister, a modern version would include a hacker to get the needed data), but it was very enjoyable despite that.  The only flaw was that Susan, the most interesting and most important character, was hard to understand.  I think the rapid-fire way words came out of her mouth was supposed to show how urgent she considered the issue and to contrast with her somber demeanor.   However, I wished she had enunciated more clearly!   I was pleased to read that more episodes have been commissioned.   You can still watch the series on PBS.com and Bletchley Park is now a museum, which I hope to visit on my next trip to England.

If you are interested in this topic, here are a couple books you would enjoy:

Codebreakers:The Inside Story of Bletchley Park

The Secret Lives of Codebreakers: The Men and Women who Cracked the Enigma Code

I feel as if I have read other fiction in which young women were sent to Bletchley Park (and had exciting adventures once there) but I can’t remember specific titles.  Survivors of Bletchley were legally prohibited from discussing their work for many years and have criticized Enigma and other novels as inaccurate.   Agatha Christie, having named a character Major Bletchley, in a 1941 mystery, caused some concern to British Intelligence as it wondered if she had heard about their secret operation.
Posted by CLM 2 comments: 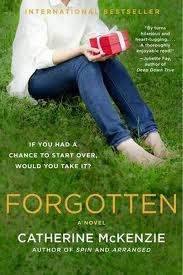 Plot: Recovering from her mother’s death, Emma Tupper, an overworked litigator, goes on the African vacation her mother always longed for and is trapped for six months without access to the real world.  When she comes home, everyone has assumed she was dead, including her employer and boyfriend.  Worst of all, the employer takes it as an affront that she has returned from the dead and has to be coaxed to take her back while the boyfriend chose Emma’s law firm nemesis as his next girlfriend.  In this poignant but sometimes funny book, Emma is forced to deal with her sorrow and decide what kind of life she wants to create with her second chance.

What I liked: Admit it, haven’t you always wondered what would happen if you disappeared for an unspecified amount of time?  Would your family and friends sufficiently mourn you?   Here, Emma’s loyal friend Stephanie is the only person who refused to believe she could have perished and – worst of all – Emma’s enemy Sophie snagged Emma’s boyfriend Craig (who, admittedly, didn’t wait a decent amount of time to move on and showed very poor judgment in allowing himself to be snagged). Sophie has also been Emma’s rival in her attempt to make partner (at a law firm even more inhuman than the ones I have worked at). The only person who seems to offer a comforting shoulder is the photographer who moved into Emma’s apartment, Dominic, and he has issues that prevent him from being more than a rebound relationship…  Lots of people tell Emma this is a meant-to-be opportunity to rewrite her life (I can see why she is annoyed) but she is the only one who can decide what she wants to keep from her old life and where she needs to start fresh.

I enjoyed the minor characters in this book, particularly Emma’s friend Stephanie, her secretary Jenny and her law firm pals, the Initial Brigade.  They provided much needed warmth and humor to offset Emma’s isolation.  This is the third book by McKenzie I have read – each very different but all very enjoyable.

What I disliked:  There was an overwhelming sadness to this book relating to the heroine’s loss of her mother and her uncertainty about her career and personal choices.  While understandable, I felt that the uplifting finish was a long time coming.   I didn’t enjoy the flashbacks to the six months she spent stranded in an isolated village in Africa, although clearly these were essential to her recognition of how she wanted to live her life after her return.  Also, I didn’t see quite why the law firm was so unpleasant to Emma.  Even if they had reassigned all her cases (not unreasonable), she had been there a number of years doing good work.  Even if they were still mad at her for going on an extended vacation it shouldn’t have been so difficult to get her staffed up again.  However, this gave her more incentive to fight to regain her old status.   Also, couldn’t Emma’s friend have rescued her possessions before the landlord dumped them all?  Reminder to self: must draft a will.

Source:  I heard about McKenzie’s book Arranged in a review by an Anne of Green Gables fan back when her work was only available in Canada, and tried unsuccessfully to find it when I was visiting my brother in Montreal two years ago (eventually buying it online).  I am glad her books are now readily available in the US and I recommend them. 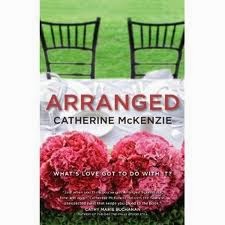 Query:  I read another book about an Emma Tupper long ago: Emma Tupper's Diary by Peter Dickinson.  I found his novels memorable but unnerving (especially Eva) and never reread any but I wonder if Catherine McKenzie was paying tribute to that heroine the way she paid tribute to Anne Blythe in Arranged?
Posted by CLM No comments: