Title: Call to Engage: A Team Poseidon Novel
Author: Tawny Weber
Publication: Harlequin paperback, 2017
Genre: Romantic Suspense
Giveaway: Thanks to the publisher, I have a copy to give away! 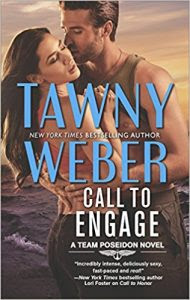 Plot: The Poseidon team consists of hard-bodied, fiercely competitive Navy SEALs. But when a sensitive mission goes disastrously wrong, three of the team’s finest will have to trust their hearts and instincts to uncover the truth…

Lieutenant Elijah Prescott should be spending his precious leave somewhere with sun, surf and scantily clad women. Instead, he’s heading home with two goals in mind. Figure out exactly how his last assignment went to hell and almost killed him—and reconnect with the woman who might offer salvation.  Ava Monroe has streamlined her life, eliminating every source of pain—including a marriage touched by tragedy. One glimpse of her ex and those good intentions turn to bad-girl desires. Her strategy: get over Elijah by getting under him again, sating herself until she can finally let go. But as betrayal within the rank of the SEALs turns deadly, there’s no denying that her heart and her life are on the line. Elijah is the only man who can protect both…

My Impressions: I am a big fan of Suzanne Brockman’s Troubleshooters series and have not been impressed by most wannabes, but enjoyed this book - it was an entertaining, fast paced read that will make you want to read the rest of the series.   The Poseidon team is investigating a traitor in its midst and this is the second book in the series. Much of Call to Engage is about a couple who have gone through the tragic loss of their child, which destroyed their marriage; they been apart for four years, rebuilding their lives. While the reader is initially sympathetic to Ava, that wears off it becomes clear that the breakdown of the marriage was her fault and that she was responsible for most of the difficulties along the way (including telling her dedicated military husband he is wasting his time for a pittance and an ego boost - lovely).  There is character development but her actions are not fully explained: one minute she is disgusted her ex has reappeared, next she is sleeping with him just to get him out of her system (does this ever work? she is not as well read as we are!), next she agrees to date him for “sexy fun” (p. 252), then suddenly she is participating in a Seal mission with the boys (p. 284), and is willing to abandon the job that helped her rebuild her life.

The story is also about Ava's husband Elijah and his Poseidon team.  While Call to Engage is the second in a trilogy, it was easy to jump right into the story. The unit commander, Nic Savino, is the most intriguing character and will star in the third book, coming in November.

Caveats: I wish Weber’s editor would alert her to this grammatical rule so she stops saying, “...between he and Ava” (page 200). Also, if Ava had agreed to leave with the child she is ostensibly minding (p. 344), wouldn’t Mason Powers still be alive? Surely Nic is responsible for this casualty?  Matchmaking in the middle of a secret, critical mission?   Even if the desired outcome is achieved...

Source: I was provided a pre-publication copy of this book by the publisher and TLC Book Tours for review purposes, and I have another to share. To enter the giveaway, please leave a comment telling me what interests you about this book. Do you have a military hero?  (US and Canada only!)

Please join Tawny Weber as she tours the blogsphere!

Title: Amberwell (1955), Summerhills (1956), Still Glides the Stream (1959) (Ayrton Family)
Author: D.E. Stevenson
Publication: Fans of Stevenson are bringing these charming books back into print so you may be able to find them inexpensively
Genre: Fiction 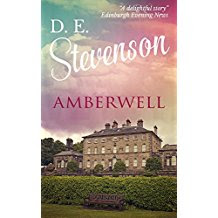 Plot: Amberwell and Summerhills are about the Ayrton family, five children growing up on an affluent estate in Scotland before WWII, doted on by the devoted servants but ignored by their parents. Initially, this doesn’t matter as the siblings are close and love their home, but the sisters suffer from their parents’ expectation that an inadequate governess can provide all the education and social interaction they need. The two brothers are fortunate because they are sent to boarding school and groomed for careers, although the younger son is bullied into taking up medicine when he wants to join the Navy. The sisters have a harder time escaping their parents’ cold, controlling authority, and do so with varying success.  Connie, the eldest sister, is a bit like Susan in the Narnia books.
Read more »
Posted by CLM 2 comments: 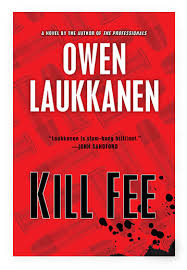 Plot: In the third outing for FBI agent Carla Windermere and Minnesota state detective Kirk Stevens, the two sometime-partners witness an assassination outside a St. Paul hotel while getting coffee, and are plunged into an investigation of a mysterious killer. Carla chases the slender young man who emerges from the hotel but, uncharacteristically, she is creeped out by his frighteningly dead eyes, and lets him escape. Although Kirk knows he should stick to solving cold cases for the state, he is drawn into another FBI case where his talent is needed, and joins Windermere in a complicated pursuit that takes them to Miami, Philadelphia, Las Vegas, and Charlotte.

Audience: Fans of Harlan Coben, Joseph Finder, and John Verney should be reading this series, but I do recommend beginning with the first book, The Professionals.

My Impressions: I love this series, and am surprised it isn’t better known. Carla Windermere is a brilliant, as well as beautiful, African-American FBI agent. Stevens is a (frequently mentioned) paunchy middle-aged white guy. They worked together so well on their first case they developed a deep appreciation for each other as professional colleagues, and some romantic feelings, but Stevens loves his lawyer wife Nancy and does not want to jeopardize his marriage. Windermere is constantly surprised by the attraction she feels towards Stevens (see pauncy-ness) but she is lonely, far from a happier assignment in the South, several years post-breakup from her last boyfriend, has no FBI colleagues who are kindred spirits - on the other hand, does not want to disrupt Stevens’ marriage. One could argue that in the middle of a hunt for a serial killer, who would have time for all these longing looks and frowns and self-reflection, but Canadian author Laukkanen makes the angst very convincing. Still, Windermere and Stevens have the best kind of working partnership – they inspire each other and their combined efforts yield great results, so perhaps the author should allow Windermere a nice boyfriend so she and Stevens can concentrate on finding bad guys. 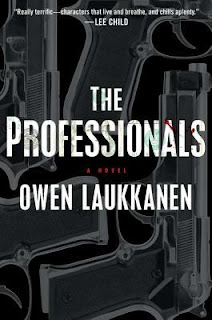 I enjoy the descriptions of the investigation, much of it realistically tedious but leavened by the clever deductions of the main characters and by a new FBI agent introduced in this book who I hope continues to play a part. In the last book, Criminal Enterprise, I was enraged by the sexism Windermere experienced from her FBI colleagues, and there was a hint in this one that the most blatant offender was still thriving. Boo!

Source: I listened to the audio version of Kill Fee which I checked out from my library.  I read the first book in 2013, and although I liked it very much I got distracted and did not get the sequel until May.  Now I am glad I waited as there are three more books - Laukkanen is quite prolific: every publisher's dream.  Having read that he spends part of his time in Prince Edward Island, I can imagine him writing in a little cottage like the one I visited three years ago.