The Oracle of Stamboul

The Oracle of Stamboul, a debut juvenile novel by Michael David Lukas, whirls the reader into a dark and intriguing late 19th century Balkan town of Constanta, then on to the more glamorous city of Stamboul. When Yakob Cohen, a worthy carpet merchant, loses his wife in childbirth, he is left to bring up his precocious daughter Eleonora alone. A grim aunt turns up and bullies Yakob into marrying her but her primary purpose is to make Yakob and Eleonora miserable. She even limits Eleonora’s reading in a way that is reminiscent of Emily Byrd Starr’s Aunt Elizabeth in Emily Climbs (but Elizabeth Murray cared for Emily and simply couldn’t show it, unlike Aunt Ruxandra). 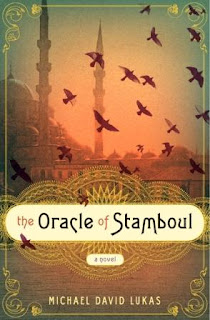 The action begins when Yakob plans a trip to Stamboul to sell his carpets and 8 year old Eleonora stows away on the ship rather than stay home alone with hard-faced Ruxandra. Yakob is not thrilled when she appears on the last night of the voyage, but he rallies and she is welcomed by his business partner in Stamboul, Moncef Bey, who showers her with beautiful clothes and gives her the run of his library. It is Bey who gives her a home when tragedy strikes, and provides her with a tutor, a robust Englishman she and Yakob met on their voyage. A brilliant student who can break a code without effort, Eleonora’s skills soon come to the attention of the Sultan, who invites her to his palace as a novelty and ends up consulting her on political strategy.

I had heard about this book several months ago, and was intrigued because it reminded me of books by Eva Ibbotson, sadly no longer with us. There were some elements that were similar – the intrepid orphan who enchants adults and faces the direst situations with courage and integrity. However, Eleonora, while plucky, never won my heart the way an Ibbotson heroine does. Her sorrow was too bleak and while I pitied her, I yearned for some hint her life would get better (instead, she was deluged with political paperwork to wade through and analyze like an overburdened lawyer doing document review) and it was hard to care about her. Ultimately, while original and very readable, I felt the book lacked the dimension that would transform it into the type of juvenile classic that is reread. I enjoyed the descriptions of Stamboul, and the book made me want to visit Istanbul. However, I found the ending extremely disappointing, if not annoying. While it leaves open the possibility for more stories, it made me impatient for an 8 year old to set off alone to find happiness elsewhere. It seemed unfair for the exotic city of Stamboul not to provide a permanent home for this able heroine. And what use were the hoopoes? I kept waiting for them to provide assistance or guidance but they primarily just followed Eleonora around.

The book is beautifully packaged as you can see, with a design that is reminiscent of the exotic world the author is trying to convey. I appreciated the opportunity to participate in the TLC Tour for this book, and did enjoy it. To see how others reviewed it on the Tour, please visit:

I always enjoy seeing what others thought after I have written my review!
Posted by CLM 3 comments:

Chimney House in the Snow 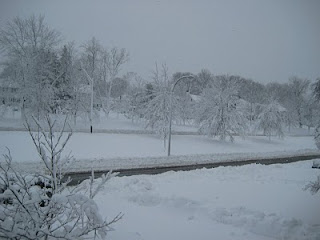 From the front steps of Chimney House looking out at the street on a recent snowy day. 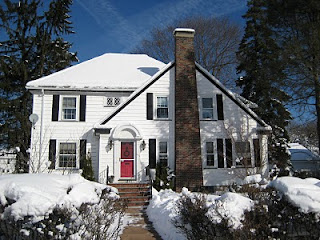 Thank goodness for the investment in a team of snow plowers and shovelers, or I would probably not have emerged much this month. 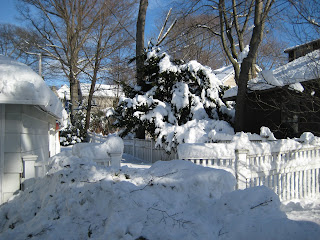 View from the back porch - a mound of snow between me and the swing set! 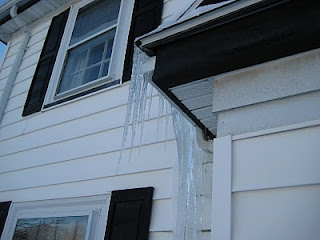 I was not pleased by all the icicles around my house, most of which were out of reach and apparently indicate dangerous ice dams. Today, some are melting due to the balmy 38° weather.