(from Bill's last day on the job)

"The most poignant moments came when Gates dropped out of technology prognostication mode — the coming switch to using ink, voice and gesture to interact with computers, for example — and shared candid and sometimes self-effacing banter about his early days with buddy Ballmer.

Freshman year at Harvard, Gates said, 'I was in this dorm up at Radcliffe, where the anti-social math types hung out. I belonged there.'"

We won't tell my mother he said that . . .
Posted by CLM No comments:

One by one the retail locations disappeared - the Brigham's in Newton Centre where my siblings and I were sometimes allowed a cone after Sunday Mass (they cost $.20 at the time) is now a travel agency - but the ice cream was still available in area grocery stores, and I am still devoted to their peppermint stick and their chocolate while my mother likes Big Dig and my sister Andrea swears by the oreo cookie.

Now it is revealed that Hood will buy Brigham's which I find very sad, although I have great respect for John Kaneb who owns Hood (he is a loyal supporter of Harvard football, and I sat with him and his wife Ginny at last November's end of season banquet). Perhaps I should write to him to emphasize which flavors they simply must continue.
Posted by CLM 1 comment:

The perpetual appeal of Nancy Drew . . . she is about to get her first video game adventure, and while I did not find Wii at all appealing I am definitely in the minority.
Posted by CLM No comments:

Still Crazy After All These Years

Did you even know the B-52s were still performing? Let alone that they have a new album, Funplex! I wish I had known about the tour in time to see them in Boston! Or even in their prime... The new album is getting good reviews, mind you.

Athens, GA (hometown of the B-52s and REM both) seemed pretty remote then (despite my having relatives in Dublin, GA), but now our friend Claudia lives there and works at the famous vegetarian restaurant The Grit!

(Claudia was practically driven to become a vegetarian by a frightening experience involving her cat Tibsy and an unlucky squirrel - you would have to ask her for the details - what I could tell you is only hearsay, but I know I will never forget the shrieks coming from the house. They were what we in the law call 'excited utterances' and others might call banshee wails.)
Posted by CLM 1 comment:

Email ThisBlogThis!Share to TwitterShare to FacebookShare to Pinterest
Labels: B-52s, Cats that Kill, Funplex, The Grit

See Prince William become a Knight of the Garter!
Posted by CLM No comments:

Celtics win! My sister and I tried to wake up the oldest nephew to enjoy the last few minutes of the game and see the celebrations but for someone who sure didn't want to go to bed after the first quarter, he was impossible to wake up. Finally, my father told us not to harass him. As if! It will be a pity if he has to wait 21 years for another NBA Championship.

Does Jo March live up to expectations, as was discussed on NPR recently? I have been thinking about LMA a lot recently, after reading Susan Cheever's American Bloomsbury, and then visiting Concord briefly last Sunday. The approach from Route 2A leads directly past Orchard House, which I have taken out of town guests to fairly often. I think Shawn Kennedy, formerly a book buyer for Brentano's, a very nice friend I have completely lost touch with, won a virtual prize for being the only male on a tour back in the early 90s.

I read every Alcott book repeatedly, even the short stories. I liked Little Women but was certainly in the camp of "how could Jo turn down Laurie for that awful Professor Baer," although my mother tried to explain how German intellectuals were considered very sexy during this era. I was not convinced!

Rose, the heroine of Eight Cousins and Rose in Bloom, was my favorite Alcott heroine.
Posted by CLM No comments:

I wish someone would create a mystery like this in my home! The writer compared it to The DaVinci Code or The Mixed-Up Files of Mrs. Basil E. Frankweiler but really it's more like Spiderweb for Two!
Posted by CLM No comments:

"It made for a delicious gossip item in New York magazine—except, apparently, it's not true. The magazine's Intelligencer column reported this week that Supreme Court Justice Antonin Scalia had a chance encounter with actress Sarah Jessica Parker on a sidewalk in New York City on May 29 as they were both taking a smoke break. She had just finished taping a television interview, and he was on his way to or from a symposium."

Justice Scalia is sure in luck - dinner with me this month, Sarah Jessica last month! How can the rest of his summer live up?
Posted by CLM No comments: 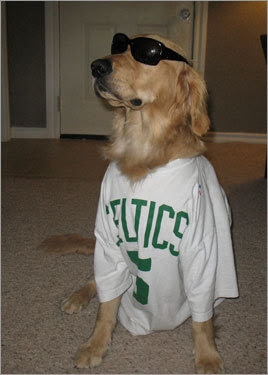 According to his Oklahoma-based owner, Ty, Winslow the golden retriever has "an irrational hatred for the L.A. Lakers". We just love the shades that put Jack Nicholson to shame.
(from today's Boston Globe)
Posted by CLM No comments:

Quote of the Day from Doc Rivers

Doc Rivers, who never won a title as a player or as a coach, said some people unfairly diminish the accomplishments of players such as Patrick Ewing and Charles Barkley because they never won a championship.

"Patrick Ewing is one of the greatest centers to ever play the game, ever, whether he won a title or not," he said. "He shouldn't be faulted. He had teammates like me. That clearly didn't help his case."
Posted by CLM No comments:

Which Austen heroine are you?

I have seen other Austen quizzes but I like these questions the best!

(with thanks to another Elswyth Thane fan)
Posted by CLM No comments: 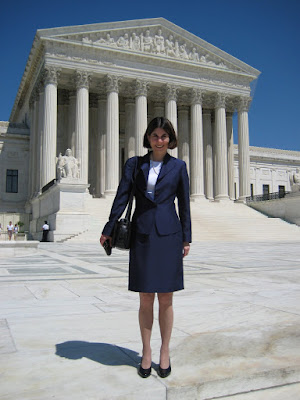 With Justice Scalia on June 2 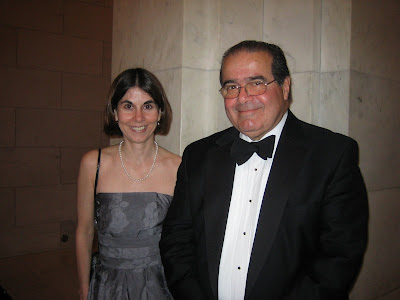 Although we did not agree on many issues, it was delightful to see him at the Supreme Court's Historical Society gala event. 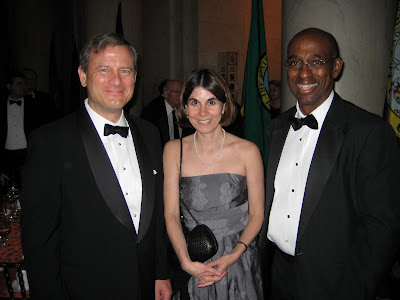