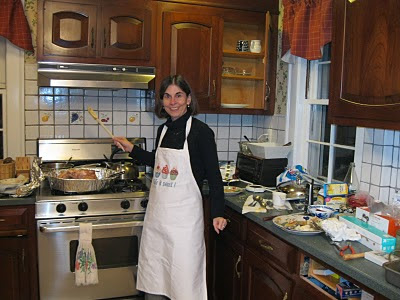 My dear friend Jeannette made and sent me this lovely apron to wear in my new home. Notice the clever way I am taking advantage of every inch of available countertop (the better to use every plate and pot in the house)(no wonder it took several days to get everything clean and back in the cabinets).
Read more »
Posted by CLM 3 comments:

Things that went wrong on Thanksgiving

Although I followed the directions, the turkey was not cooked in the middle;

Paula Deen’s potatoes would simply not mash (my mother said I should have relied on Mark Bittman instead, which is true, especially given that I have met him and supplied the rest of the family with HTCE);

The stuffing tasted good but didn’t hold together;

The sourdough bread was delicious but was frozen in the middle (I blame this on Wholefoods because again I followed the directions);

The salad was wilted (luckily, no one seemed interested in salad);

The items my mother prepared – her special spinach and sour cream apple pie – were delicious.

I made the first fire in my fireplace and it set off the smoke detector – and the home security system! (yes, I should have waited until the chimney man came to look at the flue; now I know it really does need that missing lever);

I swear I used every plate and every pot in the house, which was a problem because

The brand new disposal resented all the potato peelings and sent them back up the other side of the sink - every time I ran it or used the dishwasher;

The rod in the coat closet (a nice wooden one) broke due to the weight of the coats;

There was more, but these are the highlights.

Luckily, my parents are the opposite of critical, and didn't even complain about the frigid house.
Posted by CLM 4 comments:

It was cold but sunny day for the Harvard-Yale game with fellow Kirkland House alum, Lamar Flatt, and his lovely family. Yale's men fought to the end but Harvard won. 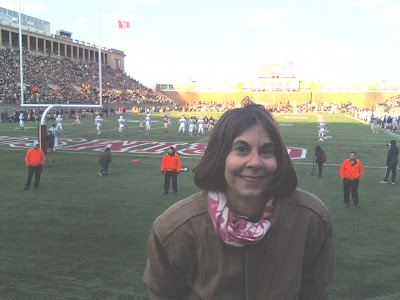 The Mockingbirds by Daisy Whitney

Alex is a junior at a prestigious boarding school, a dedicated musician, and the sort of person that rarely pays attention to the daily gossip and chit-chat of school life because she is so focused on her long term goal, which is Juilliard. All that ends when she is date raped by a classmate she barely knows, and becomes the unwilling subject of gossip and slurs. Although Alex wants to go on with her life and avoid being a victim, she has many questions about what really happened to her that night and to what extent she was complicit (if she was). Luckily, Alex has friends who care about her because it is pretty clear that the administration of the school would not be helpful and she does not want her parents involved. Instead, almost reluctantly, she turns to an underground school vigilante system called the Mockingbirds, founded, coincidentally, by her older sister. The Mockingbirds investigate her story (finding probable cause) and then put her rapist, Carter, on trial. By then the reader despises Carter and wants him to be judged by his peers.

I didn't know what this book was about when I started reading, and usually I avoid books about rape but I thought this was quite well done. My only criticism was that Alex seemed far too mature for her age and not as traumatized by her experience as I would have expected (although her efforts to avoid Carter were well described and it showed how little the school paid attention that she was able to skip meals for weeks without any administrators noticing - don't boarding schools watch for eating disorders in this day and age?). I was also a little surprised by Alex's graphic language, which made her seem tougher and more caustic than seemed in character, but this is not a book for younger teens.

I enjoyed the Mockingbirds (which turns out to be book 1 in a series) and the group's vision of justice, but of course I would not want to be on the wrong side of any group of self-righteous teens (as could happen if they got it wrong). I also liked the way Alex began to remember the details of the fateful night and did not conveniently remember a version she would have preferred but faced her demons squarely, both Carter and his cronies as well as her own memory - and finally found a trustworthy adult to confide in, although that was more for her own comfort than because the adult was going to "fix" the situation.

I received a copy of this book at NEIBA, the New England Independent Booksellers' Association.
Posted by CLM No comments: