Life is Not an Accident (Book Review) 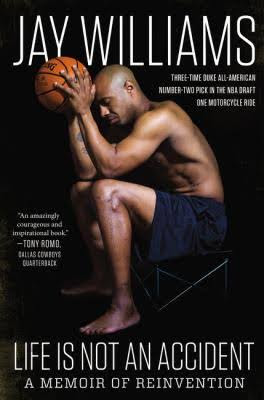 Description: Jason Williams, the outgoing Duke guard, who helped lead my beloved Blue Devils to a national championship, left Duke after his junior year (earning a Sociology degree in three years by amassing credits in summer school). He was drafted by the Chicago Bulls and had a frustrating rookie season where his mistakes were magnified and his successes were mostly ignored. Just as frustrating, the team was in a rebuilding phase and in the first few weeks of the season the Bulls lost more games than he’d lost at Duke in three years. However, he continued to work hard and was convinced his second year as a pro would be a breakthrough season. Sadly, in June 2003, he was in a terrible motorcycle accident that nearly killed him. In this heartbreaking and all too candid memoir, Jay reflects on the arrogance of a healthy college basketball star, the desperation and self-reproach he experienced after the accident, and the 10+ years he has spent recovering physically and emotionally from the fateful day he picked up the keys to a motorcycle for which he never bothered to obtain a license.

Audience: Duke alumni, college basketball enthusiasts, sports fans.  I am a Duke alumna but college hoop fans who are not Dukies or did not follow his accident will be interested in his story and be glad that he has made a successful post-NBA career as an ESPN commentator.

What I liked: This is a painful read but fascinating portrayal of a smart young man and how he recovered from tragedy. By being so candid about his inner self – his behavior in college, his excesses during his one year as an NBA player, and his various addictions and poor decisions during prolonged rehab - Jason risks alienating the reader whose approval he seeks. However, his story is so beautifully written that it would take a much harder heart than mine not to be moved by what he has gone through. I wondered if he used a ghost writer but, if so, it was not mentioned.

Admittedly, I liked the parts about Jason’s adolescence and recruitment and time at Duke better than the painful aftermath of an accident that all but destroyed him but I found the book very readable and recommend it. I was at one of the first college games he played – a tournament at Madison Square Garden – and have always had a special feeling for him, and admired not only how he played but also what seemed to be a very happy personality. I enjoy his thoughtful commentary now that he is a basketball analyst; I would prefer to see him working with Dick Vitale but that is ESPN's fault.

What I disliked: My ARC does not include an author’s note so I am curious about what made Jason (renamed Jay after he left Duke due to two other Jason Williams but, as he reveals in this book, without much input by him) decide to write this book. He (or HarperCollins) calls it a memoir of reinvention. Does he finally feel he’s at peace with what happened to him? I think he is smart enough to realize he will always have regrets (which will hit him when he least expects it) about the poor decision making that damaged his basketball career and nearly cost him his life. What is sadder is his depiction of the venom and personal attacks people use to try to make him worse about the fateful motorcycle ride. Human beings can be vile.

I can tell Jason believes he is still on a quest of self identity and it is unfortunate that his “warts and all” approach reveals some regrettable things about the parents who love him so much. I wish he had left them their privacy and dignity. He also goes on at some length about how leaving college to attempt to play in the NBA is a good move, ignoring the fact that most young players would not have had his good options if their NBA careers did not work out so should obtain a degree while they are fortunate enough to be able to do so for free.

Source: I received an advance reading copy of this book from HarperCollins in return for an honest review. Recommended.
Posted by CLM No comments: