The Sue Barton series, seven novels about an irrepressible nurse, is set approximately in the 1940s.  It follows the eponymous Sue from nursing school (based on the author's experience at Mass General)  to wife to a busy doctor and mother of three children.  The author, Helen Dore Boylston, was a real person (in contrast to the famous Stratemeyer Syndicate - not that I didn't enjoy those books as well) and friendly with Rose Wilder Lane, the daughter (as you know) of Laura Ingalls Wilder.

I read and reread the reprints of the original Little, Brown editions at my local library (and of her other series, the Carol Page books, but they were less memorable) but when it came time to own copies of my own they were very scarce.  I found Sue Barton, Senior Nurse at a NYPL sale but the other books pictured came from Australia.  Sue Barton, Neighborhood Nurse looks much too religious - part of Sue's appeal was that she was outgoing, accident prone, and fiercely loyal (not just to her friends but to the programs where she received her nursing education).  I never had any intention of going to nursing school but loved reading about her experiences, and was very disappointed the first time I met a real nurse that she did not wear a cap like Sue.  Image Cascade has brought the books back into print with charming covers but I think my mismatched set will have to do. 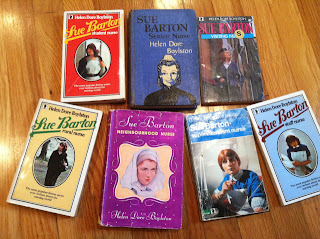 In contrast to Sue, eventually willing to retire from nursing, was the ever-perky Cherry Ames, more of a career woman but with robot-like efficiency after the first book (Cherry Ames, Student Nurse - the most appealing of the series).  In my current cataloging and reorganization of my books, I was surprised to find I own three Cherry Ames as I had never gone out of my way to collect them.  Readers usually have a strong preference for Sue or for Cherry and there were other nursing series but few with their enduring popularity.  As there is not currently room on my bookshelves for all my books, Sue and Cherry are sharing a box in the attic.  I am sure they will have plenty to discuss.
Posted by CLM 2 comments:

Plot:  Peggy is a vivid girl with brown-gold hair, laughing black eyes, and cheeks that are red through their tan.  She makes friends easily and loves a midnight feast and (although academics are rarely mentioned in such novels) at one point she writes an essay that is praised by her English teacher.  This is her first year at the Andrews and as an orphan she is dependent on the generosity of an aunt.  Peggy goes from one scrape to another, always running afoul of the stern headmistress, tossing a rosebush on a serenading Glee Club from prestigious Amherst College, spending so long primping that she is left behind from a school outing, and getting lost in a blizzard (see cover).  However, her kindness in visiting a lonely old gentlemen, presumed indigent by the neighborhood, results in a valuable friendship.  Naturally, once I knew that the old gentleman was estranged from his daughter and grandson, I expected Peggy would engineer a reunion and was not disappointed.

What I liked: The author manages to incorporate some delightful boarding school traditions in this book: handsome college men serenading dormitory rooms, bacon bats, theatre excursions, trips to dances at Annapolis, and best of all – fudge!

“Let’s have all the girls we can pack into the room in for a midnight celebration,” suggested Katherine as soon as they had flung off their coats in their own room.

“Good girl,” chirruped Peggy.  “About ten people – our most special own crowd.  Hurry up and be ready for dinner – and is there any butter out on the window ledge?
Katherine craned her eager head out of the window into the cold. “Not a bit,” she said.  “We have a can of condensed milk left, though.”

“Fine,” cried Peggy, counting off on her fingers the butter, the sugar, and the alcohol – “for I don’t think suppose there is any alcohol, is there, friend infant?”

From this an outsider might suppose that the girls were planning to concoct some sort of intoxicating beverage for their innocent little midnight party.  But it was only the preliminary preparation for the inevitable fudge.  And the alcohol was to run the chafing-dish, and not to go into it.

What I disliked: Alas, the book was very predictable and the characters were not well developed.  In addition, for a poor orphan Peggy was warm hearted but heedless, asking her aunt to send her to college regardless of expense.  She didn't do very much to earn her good fortune.

Source: I bought this book many years ago but I don’t remember where.  In addition to my long-standing interest in school stories, I was probably intrigued because my godmother’s name was Peggy Parsons.

Into the Darkest Corner (Review)

Plot: Told alternatively in the present and past, Into the Darkest Corner is a convincing and unnerving before-and-after story of Catherine Bailey, an outgoing young woman who loves to party and is sometimes too drunk to remember her one-nighters.  Then she meets a seemingly perfect guy, Lee Brightman.  Her friends think he is wonderful and before she knows it, he has moved in with her and taken over her life.  Soon she realizes he is controlling, unreasonable and violent.  He also turns out to be a policeman (which I didn't believe at first) and tries to break up with him and change the locks, but nothing can keep him away.   The reader feels every vicious word and every blow as his behavior escalates out of control.

Several years later, she is Cathy, living in a new city, recovered from life threatening injuries and trying to control her panic attacks by carefully checking every detail in her apartment – particularly whether the door is locked.  She desperately needs a friend, and luckily the new renter upstairs, Stuart Richardson, is kind, attractive, single, and – bonus – a clinical psychologist.  You would think he’d run a mile from her problems, which he picks up on right away, but even in her new pale, restrained and worried persona, he is attracted to Cathy.  She is afraid to get involved with anyone but just as she starts to fall for Stuart, there are signs that Lee is coming after her again…

What I liked: Although the flashback style seemed vaguely derivative of other books, it was very effective for building up the suspense: first, Lee’s taking over Catherine’s life and turning her friends against her, leading to a desperate attempt to escape from him and his resulting rage; second, Cathy’s attempt to rebuild her life and fall in love again, which is jeopardized when she starts catching glimpses of Lee in her neighborhood.  The way her friends and the police dismiss Catherine’s fears is as upsetting for the reader as it is for her, and the betrayal by one of her best friend reminds one of every time a friendship was damaged because of a man.

What I disliked:  Overall, I greatly enjoyed the book and only put it down reluctantly during the two days I took to read it.   It was hard to sleep at night and for once I heard every random creak in my 100-year-old house, thinking about Lee terrorizing Cathy.  I did find the heroine hard to like: in the beginning she was a heedless party girl, and afterwards she was (understandably) traumatized and paranoid, but thus not very appealing.  It was painful when she started to sense the presence of her ex or when she found clues he had left for her and no one believed her, including the new boyfriend, but it was sort of hard to believe she could fall in love with all this trauma going on.

Source: I received an advance reading copy from HarperCollins of this debut thriller, and look forward to hearing more from this author.
Posted by CLM No comments: