The Reason for Roses (review)

Plot: This is a melancholy look back by Spencer Howard at the last summer of her childhood in a small Alabama town, not long before WWII. Although Spencer, an orphan, is being brought up by her grandmother, her cousins and their parents converge on Bellefonte to spend summers together. It is unclear how old Spencer is in this book, probably about 15, with four attractive cousins about her age or several years older. 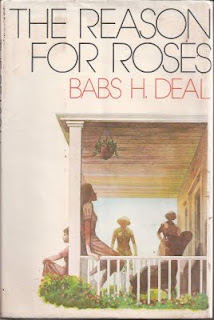 What I liked: Like the Betsy-Tacy books and Elswyth Thane novels I love so much, there are picnics and projects and secrets and squabbling and scavenger hunts.

What I disliked: I waited somewhat impatiently for something to happen (summer ended). Spencer implies that she, the normal one, survives because the memory of her grandmother's roses provides her with strength to deal with life's challenges, but I found it hard to understand why three attractive young women and two presumably attractive young men would have a hard time surviving, even with WWII in the horizon.

Sadly, the close-knit family relationships did not endure, and Spencer's children did not grow up knowing their cousins because the older members of the family that had kept it together passed away. I did not enjoy all the hints the author dropped about the sad outcomes for Spencer's cousins (which are eventually revealed but seemed melodramatic and unnecessary). While Spencer has a sense of humor, no one else appreciates it so the tone of the book is bittersweet, somewhat like the books set in England just prior to WWI (but without the charm of something like Downton Abbey). At the end of the book, she reflects on the family home in Bellefonte but does not appear regretful that it was eventually turned into apartments: "I do not go there often, and it does not make me sad...The house that belonged to us belongs only to the past, which is mine also." She may be able to subsist on her memories but I found her story very depressing rather than winsomely melancholy.

Coincidentally, I read a children's book by the author's husband about a year ago: A Long Way to Go, about three siblings who are abandoned by their parents at a motel. I found that gritty and convincing, and liked it much better.

Source: My friend Rowena recommended this as one of her favorite summer reads, and I was surprised I had never heard of it. I was able to request it from the library.
Posted by CLM No comments:

It was a pleasure to meet a fellow Georgette Heyer fan, Jeannine Pellerin, on a recent trip to Montreal. We met for breakfast and, of course, talked books. I was interested to hear that she first came across Heyer when she was living in Victoria, British Columbia, and found These Old Shades in the laundry room of her apartment building. Although her native language is French, she read Heyer in English, embracing Regency slang, and moving on to other historical romance once she'd read the Heyer oeuvre. I brought her a copy of one of my favorite books, Sabrina, by Madeleine Polland, and was delighted when she reported back that she had enjoyed it and shared with a friend (I even heard about a tea shop near that very friend in Markham, Ontario that made me want to plan my next road trip). We visited a used bookstore and found a book or three before I returned to my family. As always, it is a pleasure to meet a Heyer friend in person and discuss one of my favorite authors!

At Fenway with Sissy Andrea: 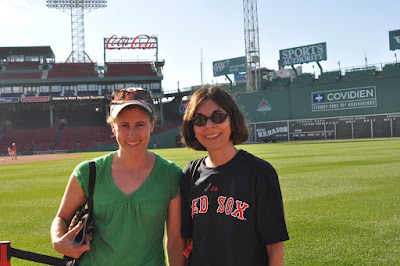 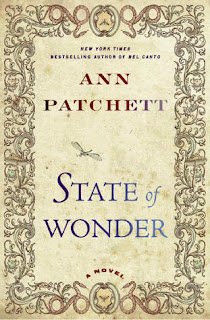 Plot: Dr. Marina Singh, a research scientist for Vogel, a pharmaceutical company in Minnesota, is sent to Brazil following the mysterious death there of her research partner and friend, Dr. Anders Eckman. Anders had gone to investigate the fertility work Dr. Annick Swenson has been conducting in the Amazon for their employer, as her failure to report back regularly concerned Vogel management.

Marina has several secrets, not simply an affair with Mr. Fox, the CEO of Vogel, but also a mistake she made during her long ago residency in obstetrics (when she was Dr. Swenson’s Chief Resident) that injured a child, and drove her to the comparative safety of a research lab (on Grey’s Anatomy her angst would have lasted only a few episodes). She has no desire to go to the Amazon and childhood trips to India left her with nightmarish reactions to the malaria medication required for either destination, but she is unable to resist the entreaties of Anders’ widow.

What I liked: The book was extremely readable and the characters fairly memorable, particularly Easter, a small deaf boy who becomes close to Marina. The Bovenders, a feckless couple, living at Vogel’s expense in Dr. Swenson’s apartment in Manaus while she is in the jungle are vivid and convincing. Patchett does a great job of conveying the nightmarish quality of the jungle; the reader experiences the oppresiveness and it doesn't matter how much is real and how much due to Marina's fevers. Dr. Swenson is single-minded in her pursuit of science (regarding Anders’ death as an inconvenience) and pushes Marina to discard her research-lab passivity and practice medicine after 13 years. By saving a life or two, she is able to come to terms with the long ago tragedy. Although Marina’s instinctive reaction when confronted by her old professor is to revert into a passive role, she displays strength and determination (but rarely wins an argument with Dr. Swenson). Their relationship is central to the story.

What I disliked: I found the plot somewhat tedious, the setting unappealing, and was so grossed out by the non-stop description of insects I wanted to stop reading. I understood why Marina was driven to find Dr. Swenson and investigate Anders’ death and recognize she felt impelled to stay so she could rehabilitate herself in the eyes of her former professor. However, she had very little personality and after a while I did not really care what happened to her. I never understood what she saw in Mr. Fox either (her trip cures her of that attachment). In Bel Canto, the author’s best known work, there was a lyrical sense of music throughout the novel that united several appealing characters. Here, there is no lyricism other than the (alleged) hypnotic appeal of the jungle. Marina goes to the opera in Manaus (Orfeo ed Euridice – themes of loss and death and of Marina following Anders blindly), perhaps a tease to readers expecting more, but she is too unnerved by Dr. Swenson’s unexpected appearance to appreciate or enjoy the music.

Perhaps the jungle setting was just too real for me – I did not see the beauty, only the misery. Eva Ibbotson makes the Amazon seem appealing and I recommend Journey to the River Sea and A Company of Swans to those who like a romanticized image of the Amazon. Sadly, I suspect Patchett’s version is closer to the truth. I gather the book is in part a tribute to or inspired by Heart of Darkness which I never read.

Source: There were over 500 people ahead of me on the reserve list in the Minuteman System; luckily, the Waltham Library had a copy in its “Speed Read” section. I did consider buying the book to support the author’s recent plan to buy/operate a bookstore in Nashville but shelf space is at a premium in my new home.
Posted by CLM No comments: