Plot: It is a beautiful English summer, just before the outbreak of World War II, when Sabrina’s father rents a house called Nuns Farthing in the countryside near Wells for himself, his daughter, his sister Effie, and Effie’s tiresome dog.  He works on his book about prehistoric England, Effie gardens, and Sabrina becomes fascinated by the locked bedroom on the top floor, which belongs to one of the adult sons of the house, who is overseas working mysteriously for the Home Office.  She breaks in, with the silent approval of the housekeeper, and starts spending all her time there, reading this stranger’s books, peeking at his letters to figure out what his name is, talking to her kitten, and yearning for him to return home so she can meet him in real life.  Is Sabrina in love with a devastating stranger or merely lonely?  Can her obsession conjure up his presence? Sabrina’s father and aunt are self-absorbed and clueless but even they begin to worry that Nuns Farthing is not a healthy place for an impressionable seventeen-year-old. 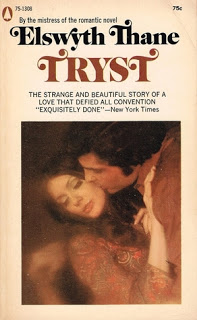 Best Quotes: Sabrina had never picked a lock in her life, but it was done every day in books.
*
“That room is kept locked when he’s not at home,” said Mrs. Pilton in her quiet country voice, and she turned without smiling and went away down the back stairs toward the kitchen.  She held herself erect and walked well, a self-respecting woman.  More like a governess than a housekeeper, thought Sabrina, making you feel in the wrong when you had done whatever it was quite innocently.
*
It was typical of the way Father did things that neither Aunt Effie nor Sabrina had seen the house before they arrived from London prepared to stay in in for an indefinite period of time.
*
But Sabrina, who was shy of strangers, was not at all disturbed by the off-chance of being caught by him in the very act of trespassing.  She was so sure, as soon as she saw the room, that it was expecting her too.
*
There were favorites of her own in his library, and hundreds of unknowns she meant to read.  If he liked an author at all, he apparently never rested till he had got hold of everything that had ever been printed by him or her.  The set was often miscellaneous, bought all at different times.  But out-of-print early works had been tirelessly run down, and new ones purchased as they appeared, so that of contemporary writers whose first volumes were immensely vital and full of talent and have now become hard to get, the room was a gold-mine.
*
“If I could find his name,” she said wistfully, just above a whisper, “I think I could talk to him – sometimes.”

“My name is Hilary,” he told her, with a sudden aching desire that she should know it.

The feeling grew on him minute by minute as he watched her that some sixth sense of hers would surely hear him, that already her sensitive, childlike perception had picked up some impression of his nearness and that she was glad of it.  Minute by minute he was surer that his presence in the room she had made sanctuary was not going to come as a shock to her, and the knowledge bred in him a high exhilaration like a wind from the sea.  If Sabrina did not mind his being there, if his homecoming did not drive her away, then he was not after all exiled and alone.
My Thoughts: The back of the Tempo paperback I found in my elementary school read, “In the forbidden room at the top of the stairs, Sabrina found love . . . and enchantment." The book is really intended for grown-up readers, not a K-6 library and I was too young to appreciate it.  Years later, after I had fallen in love with Thane’s Williamsburg novels, I reread it and discovered how much more there is to this warm, evocative, and unforgettable story than that description; however, it is hard to say more without spoilers.  I am pleased it is available on Kindle for a new audience. My only complaint is that in 1930s England men were named Hilary but a modern reader might find the name effeminate rather than sexy.


Elswyth Thane: I often write about Thane (1900-1984), who is one of my favorite authors, up there with Maud Hart Lovelace, Mary Stewart, Georgette Heyer, Pamela Belle, and a few select others.  As Helen Ricker, she left Iowa for New York at 18 and reinvented herself – new name, new friends, and a seemingly glamorous marriage to a man twice her age, the explorer of the day, William Beebe.  For those who have read another of my favorites, From This Day Forward, there are likely parallels in the marriage she depicts there of an actress and a scientist, who have nothing in common except each other.  She survived Beebe by 22 years and lived just a few hours away in Vermont; why didn’t I write to her?  And check out this writer, Donna Fletcher Crow, who visited her grave!


Odd: Tucked into my copy is a poem called The Phantom-Wooer by Thomas Lovell Beddoes, which I never put here!  It’s an ex-library book I rescued in NYC but Elizabeth Kuzina and I were the only ones who ever checked it out (or so I speculate).  I’d better ask her if she left it there. . . or maybe it was Hilary!
Source: Personal copy.  This is a cult favorite and may require Kleenex when you read it.  It always surprises me there are fans who have read this but no other Thane.  Her body of work is quite varied, including historical and contemporary fiction, biographies, other nonfiction, and even a play.
Posted by CLM