There is a beautiful new Borders in Dedham called Legacy Place, where I went recently for an Anita Shreve reading. Although I have enjoyed her books for years, I had not known she attended Dedham High School (followed by Tufts) and lives in Massachusetts. She looked much more glamorous now (due to Oprah-related success, no doubt), reading from her new book, A Change in Altitude, than when I had first met her in 1992, when she was the relatively unknown author of Eden Close. At that time NAL hosted a lunch for her to which I was invited as the New York sales rep and she signed Strange Fits of Passion, then new, for me. Later, I became a huge fan of Where or When, and included it as one of my top ten in an article for Romantic Times. Anita was very pleasant and gracious to the large group of fans who lined up to have their books signed. She recommended some favorite authors and books, including The Transit of Venus, which several in the audience tried to buy in the store without success, and I have now recommended to my book group. 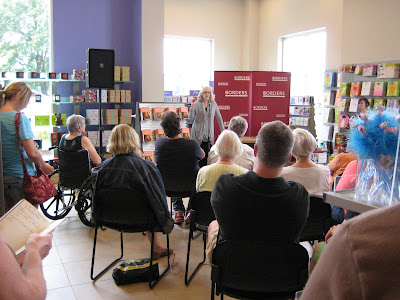 In fact, I was eager to use some 40% off coupons Borders had sent me for the store opening but this lovely new store did not have any of the books I wanted to buy! No Betsy-Tacy (horrors), which I wanted for my dentist's daughter; nothing by Lauren Snyder, although Any Which Wall was newly out in paperback, very appropriate for summer reading; nothing by Mitali Perkins although her new book, Bamboo People, is garnering great reviews and word of mouth. The store's computer purported to have one copy of The Green Glass Sea by Ellen Klages but no one could find it. So much for a book that won an armful of awards! While a pleasant young woman duly offered to order any of these books for me from Borders.com, she explained that she could not honor my coupons, and while I understand that Borders is in great financial difficulty it should not allow a customer to leave empty handed. Even a token 10% off an order for these books at Borders.com would have been a good customer service move because of course I did end up ordering them elsewhere. I wish I were still in touch with the children's buyers for Borders because they are missing out on some viable titles. 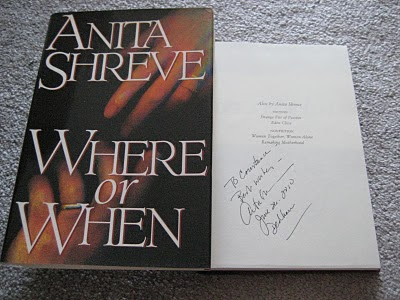 I tried to think of something else to buy and certainly the store was full of lovely books (especially the history and cookbook sections) but as I am hoping to move this summer it did not really make sense to buy a nonessential that I would simply have to pack. 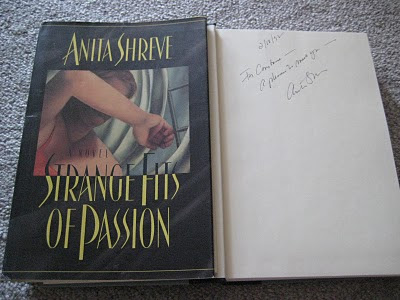 It's become a bit of an issue (I hope!) that Borders doesn't carry Perkins's book. Do check out this piece on her blog.
http://www.mitaliblog.com/2010/06/ms-porters-second-grade-library-class.html

It's too bad that they made such a poor showing that that limited selection. A book signing especially one for Anita Shreve is a great opportunity to get people in stores and buying books.