I'd Know You Anywhere (review)

I was a fan of Laura Lippman even before I read her books. How can that be, you ask. She had written a delightful article for a Baltimore newspaper (which I saved but cannot find at the moment) some time around 1995, about her favorite children’s books, among which were the beloved Betsy-Tacy series. I had shared the article with the New York Chapter of the Betsy-Tacy Society. I was working at Avon Books at the time, and sitting in a monthly new title meeting when gifted editor Carrie Feron described a first mystery called Baltimore Blues. I recognized Laura’s name instantly and knew she must be the same person who had written the article because of the Baltimore connection. After the meeting, Carrie told me how much I would like Laura’s book and, as I tucked a manuscript under my arm, I persuaded Carrie, who had a toddler at the time, to read the first Betsy-Tacy book. It was my job to introduce Laura's books to Barnes & Noble. Baltimore Blues was the beginning of a great series, and my sister prefers the books about Tess Monaghan. I like Tess but also enjoy the bigger, standalone suspense that Laura has been writing most recently. 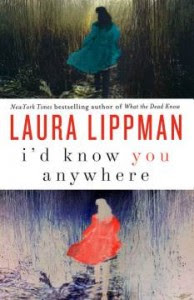 I’d Know You Anywhere, Laura's brand new book, moves back and forth from the present, where Eliza is a competent mother of two, to 1985 when as a teen she was kidnapped by Walter Bowman. Now Walter is on death row for the death of another girl he kidnapped and when he contacts Eliza her carefully rebuilt world threatens to fall apart. This book has a has a different feel than other Lippman books because it is more of a psychological novel than an suspenseful thriller. It is primarily about Eliza’s recollections of the summer she spent with Walter, and at times one can’t help thinking she almost enjoyed the adventure despite her constant fear and obviously before the violent acts that ultimately result in Walter’s arrest. Eliza becomes haunted by the girls who did not escape from Walter and years later she cannot stop wondering why she alone survived. It is not just the serial killer in this novel who is unnerving: Lippman creates minor and major characters that are memorable and somewhat creepy. In particular, the mother of one of the murdered girls is heartbreaking. However, the intended suspenseful conclusion did not quite deliver.

I recommend I’d Know You Anywhere, which I read for the TLC Book Tour, but you should also go back to the Baltimore Blues and become acquainted with feisty Tess Monaghan. Here is a fun link to a Washington Post interview that my friend KC Summers did with Laura several years ago, exploring Baltimore. I also liked this link from Laura's website which describes some of Laura’s favorite children’s books (I love Edward Eager too and am glad my college remembers him with an annual creative writing prize). Laura usually mentions a kidlit favorite in her books, and here it is the Oz books.


Laura also wrote the introduction to the new 2-in-1 edition of Heaven to Betsy-Betsy in Spite of Herself. If you are an adult who has never read Betsy-Tacy, this is where you should start.  Late breaking news: congratulations to Laura - I'd Know You Anywhere debuts at #16 on the 8/27/10 New York Times list.
Posted by CLM

I read and reviewed this one too for the tour. I agree with you and also enjoy her Tess books!

I did not know her favorite kids books were Betsy and Tacy. I loved them as a kid!

I've heard great things about the Betsy-Tacy books but have never read them myself. How fun to find a connection between books you love and a new-to-you author, and even better when you find you really enjoy that authors books!

Thanks for being a part of the tour. :)