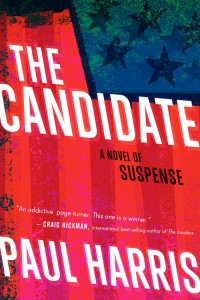 Source:  I received this book from TLC Book Tours, which you can visit to find the other stops for the Candidate.   TLC and the author are also providing a copy for me to give away (US/Canada only) -- please leave a comment if you would like it!  If there's more than one request, I will do a lottery.﻿
Posted by CLM

Even this Republican is intrigued! CC

When I saw the title I thought we were going to have another obscure out-of-print book in common! But in the event that you're interested in a fin de siecle political/western/romance, head over to Gutenberg to check out Joseph Altsheler's book by the same title.

I love that you were reading this while listening to another politically themed book - what an interesting combination! I'm sure each book raised issues for you in the other book as you went along.

I would love to read this. And I'd be happy to pass it on when I'm through, if you're willing to lend it.