Plot: Two young women in Western Canada, one in 1856 and one in the present, separated by five generations, communicate through an old diary and a cherished brooch.  Beatrice, a lovely and, unusually, educated young woman in a rural Canadian town, has returned from school to find that her father has married a dreadful woman, Ivy, who not only resents her stepdaughter but is prejudiced against her husband’s Cree ancestry (this would make more sense if it were the ancestry of the first wife – Ivy shows her distaste of her mother-in-law’s and stepdaughter’s heritage but apparently overcame her feelings with regard to her husband; I suppose because she was desperate to remarry).  Ivy’s seemingly uncouth adult son has settled nearby but Beatrice prefers the company of the new and more refined minister, Reverend Dalhousie. 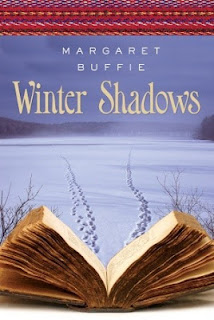 Present-day Cass, younger and less mature than Beatrice, lost her mother recently, and her father is remarried to an insensitive woman named Jean with a bratty daughter, Daisy.  The blended family is living in a stone farmhouse that once belonged to officers of the Hudson’s Bay Company, and was inherited by Cass’ mother.

When Cass finds Beatrice’s star brooch and her diary, the two girls start catching glimpses of each other across time.   As Beatrice tries to make an important life decision, she is aided by sound advice from Cass, and, in turn, Cass begins to make an effort to cope with her own difficult family situation instead of sulking or making trouble.

What I liked:  This is a lovely and subtle book set in what is now Manitoba.  Beatrice is a very appealing character and I enjoyed how the author develops Duncan Kilgour from an overbearing and uncouth stepbrother to a supportive ally who teases Beatrice.  It is clear he has hidden depth by the kindness he shows to Beatrice’s grandmother, so the reader likes him long before Beatrice does.   In different ways, both Beatrice and Cass, distantly related, come of age through the friendship they establish by Cass' ability to reach back 150 years to her.  The Canadian frontier history and description of prejudice shown to those of mixed blood also make this a memorable story.  Grade:  4 1/2 stars.

It is not clear why the two fathers made such poor choices when they remarried but at least Beatrice’s father realizes his mistake.  Somehow the two young women are able to establish wary but functional relationships with their stepmothers, which is more realistic than some books with more of a Brady Bunch outcome.

Source: I got this from the library, although I do not recall how I learned about it.  I am pleased that the Minuteman System is supporting Tundra Books.

Thanks for the review! I'm looking forward to reading this book.