Plot: 1882. Peter Bradford, an indulged member of a prominent Irish-American Boston family, is traveling to Ireland to visit his great-uncle, James O’Toole, the Earl of Cloneen, whose heir he is. On the train en route, he meets a beautiful young woman, falls instantly in love, and they spend the night together. Desperate attempts to find her the next morning are unsuccessful. When Peter reaches Ireland, he has two shocks: his uncle has just died, and his uncle’s much-younger widow is Anne, the woman with whom he just spent the night. Deeply ashamed of her infidelity, Anne will barely speak to Peter, but there is an added complication: if she is pregnant with a son, their child will displace his own father as the new earl! 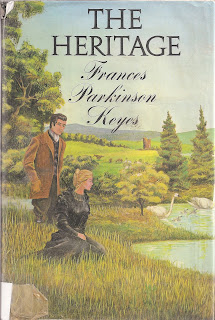 What I liked: I remembered this book while watching Downton Abbey because of the issue about the heir, and wanted to reread it right away. Keyes’ books always involve honor, and how people feel and react to it in different ways. Here, Anne cannot forgive herself for having betrayed her elderly husband for a night of passion with a handsome young man, while Peter persuades himself that his uncle would have understood and approved of Peter’s passion for Anne because he wants a permanent relationship, not a one night fling. Peter never even considers betraying Anne’s secret even if he is dispossessed by his own child but it’s an enormous thing to keep from family, friends and the local priest . . .

An Irish country estate is an unusual locale for Keyes, most of whose books are set in New England or New Orleans. In one of the long forwards she is known for, she describes how she got the idea for this book. What she does not mention is that although she grew up as Protestant in New England she converted to Catholicism in 1939 (I bet it is no coincidence that she waited until her husband died – it is not the kind of thing Protestants of her background did). Born in 1885, Keyes was just a few years older than Maud Hart Lovelace but their worlds were very different. Keyes’ husband served as Governor of New Hampshire and later spent 18 years in the U.S. Senate. As a Washington hostess, she knew Eleanor Roosevelt and all the political luminaries of that era.

What I disliked: Peter is a well-intentioned but condescending and sanctimonious character, and his attitude toward Anne from the first is annoying: “he could not let the night go by without making an attempt, however, rash to possess this unknown girl” . . . he wanted “to prove he could more than meet her challenge, that he could be her master, as well as her mate.” Later, although he keeps saying he is in love with her, she is unpleasant and distant, and it is hard to believe he really knows her at all or that they have anything in common. And while I have enjoyed Keyes for years, her style is very mannered and unconvincing – no one talks in paragraphs that go on for pages. I think her appeal is the vivid descriptions and memorable characters.

Source: My mother used to own the Fawcett paperback edition but I wound up getting this from the library. Some libraries have given away all of Keyes’ books which is a shame.   For readers who visit New Orleans, I highly recommend a visit to the Beauregard-Keyes House where FPK lived.

HOW did you learn that Keyes rhymes with "size"? What an amazing fact to know! I keep saying it in my head, and it sounds ridiculous.

Mel and I both read "The Freedom Maze" and loved it - she listed it as one of her best of the year! I keep meaning to tell you.