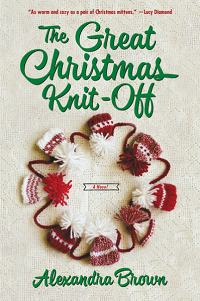 Plot: Stood up at the altar by her fiancee and in disgrace at work, Sybil and her dog impulsively jump on a train to visit her best friend Cher, now running a pub in the picturesque village of Tindledale, somewhere in England. Expecting a quick weekend visit, Sybs woefully underpacks and winds up staggering miserably through the snow without boots.  Luckily, despite her misery, she is warmhearted and makes friends easily with the quirky inhabitants who feed her, clothe her, and – in the case of the local doctor, whose name is [clue] Darcy - romance her. However, the fun part of the story is when Sybs, an obsessive knitter, helps the twittery owner of a yarn shop revitalize her store and pay off all her bills by enlisting all the villagers in a massive knit-off making hideous holiday sweaters in large numbers.

What I liked: I enjoy a novel with a Christmas setting (although it was chiefly the snow and ice that gave this book its December atmosphere), and this is definitely a feel good story with an appealing heroine and village setting, lots of engaging characters, enough gossipy back-story to help the reader keep everyone straight, and the obligatory happy ending.  Although not much of a knitter myself, it was fun to read the descriptions of Hettie’s House of Haberdashery, and I will look forward to another trip to Tindledale (at first I misread as Tinderdale which would likely have been a very different type of book).

Points for the charming map of the village, and I hope the grumpy bookstore owner gets his own story as the series continues!

What I disliked: I am still perplexed about the message Sybs found in her newspaper: “Give me a try.  X.”  It was later explained as a shopping recommendation which does not make much sense.

Source: I received a copy of this book from TLC Book Tours in return for an honest review. This review is the last stop on the tour but you can read other reviews of the book by clicking here. Recommended for those who enjoy a chick lit version of Cranford!

Knitting:  If you want to see some pretty knitting, visit my friend Leah's blog.
Posted by CLM

I'm glad you enjoyed this one! I'm looking for good books to get me into the Christmas spirit and I'll keep this one in mind.