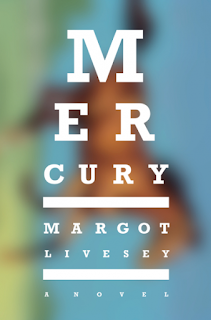 Plot: Donald believes he knows all there is to know about seeing. An optometrist in suburban Boston, he is sure that he and his wife, Viv, who runs the local stables, are both devoted to their two children and to each other. Then Mercury—a gorgeous young thoroughbred with a murky past—arrives at Windy Hill and everything changes.

Mercury’s owner, Hilary, is a newcomer to town who has enrolled her daughter in riding lessons. When she brings Mercury to board at Windy Hill, everyone is struck by his beauty and prowess, particularly Viv. As she rides him, Viv begins to dream of competing again, embracing the ambitions that she had harbored, and relinquished, as a young woman. Her daydreams soon morph into consuming desire, and her infatuation with the thoroughbred escalates to obsession.

Donald may have good vision but he is slow to notice how profoundly Viv has changed and how these changes threaten their quiet, secure world. By the time he does, it is too late to stop the catastrophic collision of Viv’s ambitions and his own myopia (from the publisher).

My Impressions: I had read and enjoyed two books by Margot Livesey previously and so was eager to read her latest. Although I found the beginning slow, I soon identified with the quiet male protagonist whose grief for his recently deceased father felt very familiar to me as I struggle with the imminent loss of my own dear father. Although Donald is culpable in the disastrous events that affect his family, I was very sympathetic to him and infuriated by his self-centered wife, even though I recognize they were both suffering in different ways. What made the book for me was the way Livesey told the story from the perspective of both characters, first Donald and then Viv, told as flashbacks, as they move inexorably towards doom.

Livesey is a talented writer with a gift for creating memorable characters; here, the characters of Donald, Jack, and Donald’s long lost friend Robert, who appears briefly but significantly. She is Scottish-born, although lives in Cambridge now, and having visited Edinburgh last November, I especially enjoyed the references to Donald’s childhood in Scotland and subsequent trips back (even mentioning Deacon Brodie’s where I ate sticky toffee pudding!).


She also memorably sets a scene in the Peacock Room of the Freer Gallery of Art at the Smithsonian. I was unfamiliar with this fascinating art and look forward to seeing it on my next trip to DC.

Having read many horse stories during my formative years (the author mentions Misty of Chincoteague but my favorites were (are) by K.M. Peyton), it was also interesting to see an adult obsessed by a horse.  If you can get past your conviction that you would never jeopardize your happy life so gratuitously, Viv's behavior is somewhat convincing.

Source: I was provided a pre-publication copy of this book by TLC Book Tours and the publisher for review purposes. Please visit other stops on the tour by clicking below:

There was no sticky toffee pudding in this book but I enjoyed it despite that lack!
Posted by CLM

Constance, this sounds like a good one and I'll add it to my TBR list. Hugs - you know why!