Look for Her (Book Review) 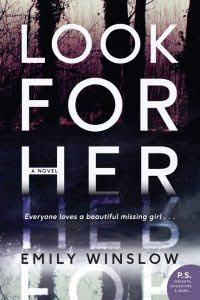 Plot: Lilling might seem like an idyllic English village, but it’s home to a dark history. In 1976, a teenage girl named Annalise Wood disappeared, and though her body was later discovered, the culprit was never found. Decades later, Annalise maintains a perverse kind of celebrity, and is still the focus of grief, speculation, and for one young woman, a disturbing, escalating jealousy.

When DNA linked to the Annalise murder unexpectedly surfaces, cold case detective Morris Keene and his former partner, Chloe Frohmann, hope to finally bring closure to this traumatized community. But the new evidence instead undoes the case’s only certainty: the buried body that had long ago been confidently identified as Annalise may be someone else entirely, and instead of answers, the investigators face only new puzzles.

Whose body was unearthed all those years ago, and what happened to the real Annalise? Is someone interfering with the investigation? And is there a link to a present-day drowning with eerie connections? With piercing insight and shocking twists, Emily Winslow explores the dark side of sensationalized crime in this creepy psychological thriller.

My Impressions: This book was my introduction to detective duo, Morris Keene and Chloe Frohmann; although it started off slow, I liked them and wanted to read more about them. It is the fourth in a series but worked fairly well as a standalone although there has been a rift between the two former partners that clearly took place in an earlier book. However, there is a lot more going on in Look for Her than a police procedural. The story centers on the long-ago disappearance of a young girl and right from the beginning we learn that people still remember Annalise and are haunted by her. Even the therapist has a connection to Annalise, although she is primarily still grieving for the husband she lost four years ago when she isn’t worried about her adult children and failing to appreciate her new husband. I especially liked the glimpses of student life as experienced by the two Cambridge undergraduates. Although some of the plot was improbable, most of the time it was sufficiently fast paced that I was too puzzled to object, and I liked the way the author wove the strands together, eventually tying up the loose ends (except one – why Henry married Hannah-Claire). 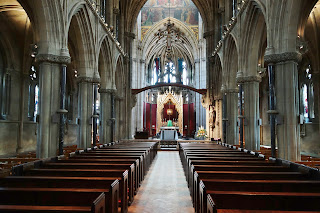 Look for Her is set in Cambridge, England, just as I am planning a trip there, which was an unexpected bonus. In fact, my mother just mentioned she wanted to visit the Church of Our Lady and the English Martyrs (above), and Winslow sets a funeral there (I wondered why the character was Catholic; if there was significance, I missed it). Even more coincidentally my middle sister checked this book out of the library and was reading it the same time I was! This does happen to us occasionally but usually when we are both waiting for a new book by a favorite author. Like me, she did not realize we would be starting mid-series. Although I found this book intriguing, I think my recommendation would be to go back and start with the first book, The Whole World.

Source: I was provided a copy of this book by the publisher and TLC Book Tours for review purposes. You can visit other stops on the tour and read the reviews below:

I like when a mystery moves quickly and keeps me flipping pages until the very end!
Thanks for being a part of the tour!