Haven Point by Virginia Hume, published by St. Martin's in June, is a debut novel set mostly in an exclusive coastal community in Maine where generations of families have summered together for years, discouraging outsiders.  The story focuses on the Demarests and is brimming with romance, family secrets, and inevitable sorrow, stretching from wartime Washington D.C. to the tumultuous 1970s and concluding in 2008. The book has been getting great reviews and in the midst of her hectic launch, Virginia made time to do this interview with me: 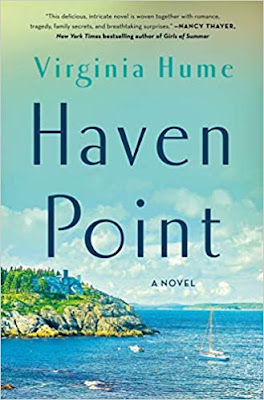 1. What drew you to WWII as the initial setting for this book?  Of course, it is one of my favorite historical periods!

In many ways, Haven Point is Anne Demarest’s story, though it is told through the eyes of Maren (her mother) and Skye (her daughter).  Since Anne’s story, like all our stories, began before she was born, I wanted the novel to begin when her parents met.

I share your interest in that historical period, and it fit chronologically.  In addition, I’ve read many stories about World War II abroad, but far fewer about the homeland experience, and none at all about World War II in Washington, D.C.  David Brinkley’s wonderful book “Washington Goes to War” captured my imagination and cemented my interest in using my home town as the initial setting of the novel.

2. Was there a reason you made Maren a nurse when she could have been doing almost any type of war work in DC and still met Oliver?

That’s a good question! I don’t recall considering any other occupation for her.  I suspect my admiration for nurses played a role. I have many nurses in my family, including my mother, who went back to school to study nursing when I was fourteen years old. Somewhat unrelated but interesting: my great aunt, Lucy Minnigerode, sailed on one of the first Red Cross “mercy ships.” She spent a year supervising a unit of nurses in Kiev, Russia and was awarded the Florence Nightingale medal in 1925.

Also, while Walter Reed Army Medical Center was far from the front lines, the hospital - particularly the amputee and burn wards – provided a window into the horrifying consequences of the war. The accompanying drama and heartache offered many opportunities to develop Maren’s character.

3. I could have read a whole book about Maren’s nursing experiences at Walter Reed but I also really enjoyed her initial impressions of Haven Point – from her faded mother-in-law to the shabby chic homes to the arrogant men who turn up for the weekends.  What gives Maren, an unsophisticated girl from a farming family, the strength to stand up for herself in this preppy enclave?

My appreciation for the female protagonists of nineteenth and early twentieth fiction, which I think we also share, definitely provided inspiration for Maren’s character. They are flawed, of course, but not neurotic.  My favorite characters, in addition to intelligence, have a fineness about her – some quality or constellation of qualities she can summon in the face of adversity.  Austen gave us Elizabeth Bennet’s keen intelligence and humor, and Elinor Dashwood’s prudence and a strong sense of duty, paired with her deeply affectionate nature.  In Elizabeth Gaskell’s Margaret Hale (North and South) I noted a firm commitment to helping those less fortunate, as well as a fiercely independent streak.  And in Molly Gibson (Wives and Daughters), a girl who is sheltered, but also perceptive and curious about the world.

What Maren shares with them all is belief in her own inherent worth, and a resistance to seeing herself through other people’s eyes.  For instance, while she knows the people of Haven Point (Maude and Georgie excepted) might not appreciate that her parents are decent and hard-working, and that her father is the well-respected proprietor of a successful farm, she does not allow their ignorance to dent her pride.

Maren also has an easy sense of right and wrong, and a deep understanding of basic human truths she leans on in the most critical moments in her family’s life.

4. The men in this story are not as memorable as the women – except for Finn Donnelly, who is an outsider like Maren.  At one point, I wondered if they would wind up together.  Does he exist as a contrast to Oliver or to show how Maren was able to make a place for herself in Haven Point?

The men of Haven Point are certainly in the background.  Though the community is fictional, it does share a characteristic common to many summer colonies – their tendency to be matriarchal. Most summer colonies were founded when few women worked outside the home.  The men were only present on weekends, or perhaps for a week or two. In addition to examining female friendships, I thought it was interesting to examine a society where women are effectively in charge.

As to Finn Donnelly, in some ways Maren does see him as the anti-Oliver. In her description of the physical difference between the two men, for example, one senses an appreciation for the kind of men she grew up with.  While Oliver is lean and aristocratic, Finn is burly and strong.  Finn could work a farm, while “Oliver couldn’t work a lawnmower.”

The fact that she identifies with them, and wants very much to like them, gives her some reliability as a narrator, and her ultimately nuanced view is important thematically.

As Maren says to Skye late in the novel, “many things can be true at once.”  The people of Haven Point are elitist. Their antipathy to the Donnellys is rooted in snobbery, and (in Harriet’s case, at the very least) prejudice against their religion. As Maren observes, the best-behaved Donnelly child would always be considered beneath the worst-behaved offspring of a Haven Point family. And in their certitude that the Donnellys would inexorably lead to Haven Point’s ruin, one sees an ugly strain of tribalism.  All those things, and many others, are true.

Maren is dismayed, for example, to find she can’t like Finn’s wife, Mary Pat, who is uptight and rude to people she considers inferior.  Finn and Mary Pat’s son Patrick is a terrible person, and their grandson is a criminal.

And Finn, while impish and amusingly impervious to insult (and decent enough to be abashed about his son’s and grandson’s behavior), is flashy and ostentatious. There is affectation in Haven Point’s aggressively understated ways, but it’s also true that the unpretentious Graham family are the de facto leaders of the community.

One of the core themes of Haven Point is that one can create a compelling narrative for or against any individual, any community. It will contain grains of truth, but that won’t make it true.

5. At one point Oliver says he didn’t think Maren needed him, but if he yearned to be needed, why didn’t he provide more nurturing to his younger two children?

I saw him as having a fear of abandonment, not uncommon in the adult child of an alcoholic mother and a distant father.  His more detached parenting was somewhat typical of his time and his social milieu, though to some extent also a product of his family of origin issues.

In both Skye and Maren’s narratives, one does sees glimpses of redemption in his relationship with his granddaughter.  Oliver was introverted and not effusive, but he did adore Skye. He spent time with her, was interested in her. And thoughtful about ways to mitigate her difficulties.

6. Have you visited Maine?  Was Haven Point based on a real place?

Haven Point is a composite, really, I borrowed anecdotes and traditions from many summer communities, including Old Black Point on the Connecticut shore, where my grandfather had a house.  He sold it when I was very young, but I think it was partly responsible for my fascination with such communities.

As to Maine, I’ve always loved New England in summer, and there’s barely a body of water or stretch of coastline I haven’t visited at some point. I was in my twenties, however, before I finally made my way to Maine. I fell in love immediately. I knew the rugged coast, with its rocky cliffs and wild weather, would provide the right backdrop to tell the Demarest family’s tumultuous story.

I’m working on another novel set in the same location in 1895.  It’s not exactly Haven Point’s birth story – more “How Haven Point Got Its Name.”  It has three interwoven narratives.  One is the sister of Elizabeth Demarest (the original matriarch – she was mentioned in Haven Point).  Another is a working-class Irish woman, who is forced to dress as a boy.  The third is another great aunt of mine, an artist and suffragette, whose life story I am bending (though only slightly!) in order to place her on Haven Point for a summer.

About the Author: Virginia Hume is a freelance writer and editor. Her early career was spent in politics and public affairs. She lives outside Washington, D.C. with her husband, their daughters, and an under-groomed bichon named Chester.  I got to know her on Goodreads where we realized we had very similar taste in books. 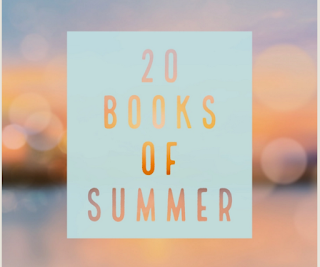 Haven Point is one of my 20 Books of Summer. Congratulations on your first book and thank you for a great read, Virginia!

I like the timeframe of this book, and the setting in Maine. For some reason I like to read about families that "summer" on the coast, although I have never been at an economic level to do such.

Great interview! I loved how the author was able to cite some of her favorite heroines from 19th century literature as inspiration.